Today is Inauguration Day for the the new President of the United States of America.

Now I'm not going to get into the whys and wherefores of the last four years under the 45th President, or all the controversy that has followed the early November election, or recent events and developments in the place that has prided itself on its democratic history, processes and systems. Too many others have done that already.

But today, when Joseph Biden is sworn in as the 46th President at the Capitol Building  in Washington, D.C. he will follow in a long line of men (yes, only men so far) who have held an appointment which has given them immense power and authority.

Sometimes it's controversial, and often exciting as the new incumbent of the White House solemnly raises his right hand, places his left hand on a Bible and, before the nation and the world, recites the Oath of Office of the President of the United States of America :-

It's an important moment in the life of the nation, but sometimes it's more historic than others.

In January 2009, I awoke very early in a hotel room in Christchurch, New Zealand (where I was coming to the end of a fabulous five week Holiday Down Under), to watch the swearing in of President Barack Obama. - his first term of office.

It was 12noon on the 20th January in Washington DC.  For me sitting in my jimjams in New Zealand, it was already 6am on the 21st. But I was absolutely determined to be part of this historic moment  - the swearing in of the first ever African American president. What a day!

So, to mark this next much anticipated inauguration, and as I am a bit of a history nerd, I've been digging further into the history of the Inauguration and I've discovered that it hasn't always been on January 20th or even at the Capitol building in the USA capital.

The first inauguration, of George Washington, took place on April 30, 1789 at Federal Hall in New York city. When he was sworn in, the city that now bears his name wasn't even built and Washington lived in New York and Philadelphia - both cities served as the American capital prior to the one we know today. In fact, it was while Washington was in office that he signed a bill which established a new, future, permanent capital city built along the Potomac River ... the place now named Washington, D.C. in his honour.

After Washington's inauguration, all subsequent regular swearings-in of the American president from 1793 until 1933 were held on March 4.  This, I'm reliably informed, is the day of the year on which the federal government began operations under the U.S. Constitution in 1789. The only exception to the rule was when March 4th fell on a Sunday, when the event was shifted to Monday March 5th.
It took an amendment to the Constitution (the Twentieth Amendment ) to move the Inauguration to January 20th  - it was all to do with the amount of time in took to count votes after the previous November election and it therefore reduced the 'transition' periods between administrations.  And there it remains, apart from the Sunday thing which shifted the swearing in to Monday Jan 21st in 1957, 1985, and 2013.
As for the venue, after George Washington's inauguration in New York, the solemn swearing-in moved to Congress Hall at Philadelphia, Pennsylvania (1793 and 1797).  In 1817, James Monroe was sworn in at the Old Brick Capitol in Washington - the Capitol building was being restored following the war of 1812. And - interesting point - three other inaugurations—Franklin D. Roosevelt's fourth (1945), Harry S. Truman's first (1945), and Gerald Ford in 1974 —were held at 1600 Pennsylvania Avenue - the White House.
And so it is at the Capitol building where Joe Biden will today, amidst unprecedented security and at a time of real uncertainty for his nation, raise his right hand, put his left hand on a Bible and swear that Oath of Affirmation.
And I, as someone who learned to appreciate and love that great land many years ago during two summers when I was privileged to be welcomed and work there, wish him and the people of the United States of America, peace, health and harmony.

Posted at 08:00 AM in Current Affairs, Daily Thoughts, History, media, One Day at a Time, politics, Travel, Writing | Permalink | Comments (0)

I’ve been a journalist for a long time. I’ve occasionally reinvented myself along the way, from newspaper reporter, to radio and television reporter, presenter and producer, to PR consultant and even to writer and author. Some would say I have a short attention span!

Down the years I’ve met some very special people, especially in my work as a journalist and presenter, and although I’m not one to name drop – well, not routinely anyway – I am privileged to have been in the same room and even conversed with some of them.

I’m thinking today of someone who I met him a couple of times during his lifetime in a professional capacity and who always left me in awe.

Why I’m mentioning him today? Well, because it was on January 7th 1925 that Gerald Durrell was born.

Writer, naturalist, conservationist, zookeeper, television presenter and a larger than life character, he founded the Durrell Wildlife Conservation Trust, and the Jersey Zoo, which is one of my favourite places in the world. It’s no ordinary zoo but rather a place which epitomises Gerald Durrell’s passion for animals and conservation. Here – at its headquarters in the parish of Trinity in my lovely home island, and in its centres around the globe – the Trust is in the business of rescuing, breeding and sometimes reintroducing endangered species into the wild. The animals in its care are not kept in traditional cages and in fact, some of the work in Jersey which champions the cause of endangered species has also helped to change attitudes to 'zoos' and the way animals are kept in captivity. 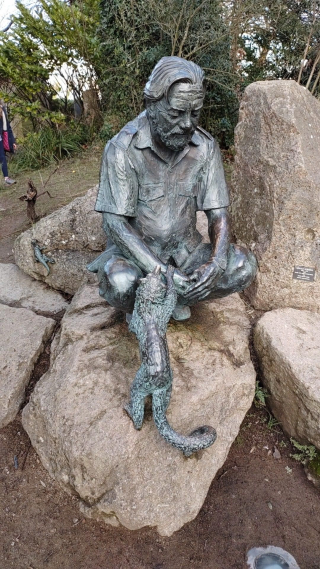 I first read about ‘Gerry’s’ passion for the ‘little brown jobs’ – the inconspicuous animals which few others cared about – through his books including My Family and Other Animals’ and in recent years I’ve enjoyed the TV series ‘The Durrells’ which documented the Durrell family’s years living in Corfu in Greece.

Gerald Durrell was unorthodox, adventuring and a bit of a rule breaker. He followed his heart, often to the detriment of his wallet and his ambitions. He was a man of perseverance and untold imagination.

But what has resulted from his extraordinary if somewhat unconventional life is an exceptional place and mission, and some astonishing results in conservation. Thanks to Gerald Durrell, his team and legacy, there are dozens of species - many of them small and seemingly inauspicious - that survive today. And as each species is part of a chain, that often means that the saving of that one animal also may ensure the survival of those within its circle of life.

I remember when I was working at Channel TV (now ITVChannel) – the local commercial TV station for the Channel Islands - Durrell was already on the hunt for a strange almost legendary little creature purported to still be existing in the forests of Madagascar. Thought to be extinct, the Aye-Aye is a weird looking little beast  (actually a type of lemur) with bulging eyes and a long middle finger and in 1990, Gerald Durrell departed for that island off the coast of south Africa, to find it. He was accompanied by a Channel TV crew and I remember the excitement surrounding the expedition. And they made a brilliant film on return!

Today you can see some of the offspring of the original Aye-Ayes that were rescued, in the Jersey Zoo, living in a specially designed enclosure which mimics the climate and darkness of the Madagascan forest. It’s one of my favourite places at the Zoo. And if you’re interested you can read about Durrell’s last major animal-collecting expedition  in a book called ‘The Aye-Aye and I’.

We can’t all be internationally renowned conservationists, or even pioneers who change the world. But if we have a passion, perhaps we can determine how much it means to us, and start following it – if we are brave enough?

And so,  the question I ask myself today is – am I really following my dreams?

Image of statue of Gerald Durrell at the Jersey Zoo .. thanks to Alice & Richard Nunn