"All children, except one, grow up."

A classic and inspired opening line from one of the best loved children's stories of all time.

Not just the Boy who Wouldn't Grow Up but the book, and the play and the man who created him - J.M.Barrie.

Full disclosure here  ... I am an avid reader of classic children's stories. I have a good collection of them, some of which I read first as a child and some which I re-read over and over, always finding something new in them every time of reading.

Yes I know many of the books I love were written in a different time, and maybe some might say that they are not as 'relevant' to the young generations that have come along since they were written, but what I love about these tales is that they are often beautifully crafted, invariably include fantastical storytelling and they have the ability to transport me into another world.

As a would-be children's author (I'm still working on it by the way) I recognise now that I was probably born in the wrong time, because these days to be a children's writer I guess one needs to be more 'edgy' than people think the writers of yesteryear were.

Except that it's all relevant. In their time, many children's stories DID speak into issues and situations, including social issues,  and sometimes challenged them, albeit subtly. And many of them are just simply about human nature and those values which, I hope, we will all want to treasure regardless of the times. 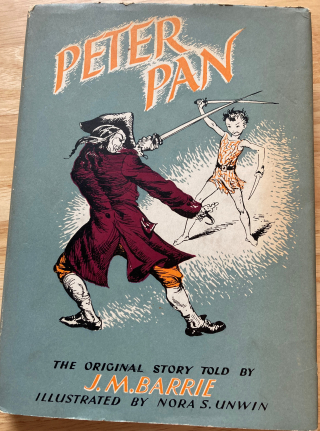 Which brings me to the story of Peter Pan, which is really partly about 'youthful innocence and escapism'. Peter is a mischievous, free-spirited, rather cocky and careless boy who doesn't want to grow up. He is determined to be independent but it's only when he meets a girl called Wendy and her brothers that he gradually realises that love is also part of the human equation. I don't know about you but that's a lesson lots of us can learn, whatever era we live in!

These days the story of Peter and Wendy and their adventures in Neverland, the fairy Tinkerbell, the Lost Boys, the ghastly Captain Hook, are all well known to us through numerous interpretations, including in various movies and cartoons down the years.

Although J.M. Barrie created Peter early on, he really made his first main public appearance in a play ...  Peter Pan, or The Boy Who Wouldn't Grow Up ... which debuted at the Duke of York's Theatre in London on December 27 1904 - interesting because stage productions of Peter Pan are often now associated with the Christmas period and the pantomime season, at least in the UK. 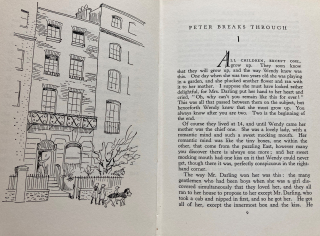 In 1911 the story of Peter and Wendy began to reach a wider, worldwide audience when it was reworked as a novel with that classic opening line.

My treasured copy of the story, which I picked up years ago in an old book shop, was first published in 1951 and at the start of the book there is this inscription ...

Do you know that this book is part of the J.M.Barrie "Peter Pan Bequest"? This means that Sir J.M.Barrie's royalty on this book goes to help the doctors and nurses to cure the children who are lying ill in the Great Ormond Street Hospital for Sick Children in London

And this is what I love most about Peter Pan.

SO much has been written about Peter, Wendy, Neverland, the dog nurse Nana, the whole 'cast' of the play and the subsequent stories, books and movies,  J.M. Barrie himself and the children who so-called 'experts' reckon Peter and his characters were based on.

J.M.Barrie is best known for Peter but he wrote so much more, including many plays and stories which address social concerns. And I love the fact that in 1929, Barrie assigned the copyright of the Peter Pan works to Great Ormond Street Hospital, a leading children's hospital in London.

I understand the copyright status is unclear these days because Peter Pan is now generally in what is called 'the public domain'. Original copyright in the UK ran out on June 19th 1987, the 50th anniversary of Barrie's death but that was later extended to another couple of decades, and there have been some developments since in other parts of the world. But that doesn't take away from the fact that down the years GOSH has benefitted greatly from the 'Peter Pan Bequest'.

I know Great Ormond Street Hospital a little, having visited to report as a journalist and in a personal capacity with loved ones, and they do amazing work. It's a hospital dedicated to the care of children and it IS a very special place where children are at the centre!

So today - as we mark the day in 1937 that J.M. Barrie left this earth - I was trying to think of a way to celebrate him and his most well known characters. And I found this quote and this image ...  which is just inspiring.

Whatever we 'believe' in, we all need trust and faith, if only in those around us. And a little of 'pixie dust', even if not scattered by Tinkerbell herself, helps us to dream and create a little bit of magic for ourselves and others.

A Song for Friday

It's almost the end of February - my second month writing this blog.

I have to say sometimes - just sometimes - I've struggled to be inspired as to what to bring you.

Shall it be another diatribe based on something that happened 'On This Day in History'? Just something that popped into my head, a picture I've seen, a quote I adore?

Or in this case, a piece of music?

Little known fact ... unless you're me or a few people I know who've heard me go on about this endlessly ... one of my favourite stage shows is 'Les Misérables'.

When it first came to London's West End I heard the soundtrack, saw some reviews and was absolutely determined to see it live. I didn't live in London so every time I was visiting the UK capital, for whatever reason, I would try to get tickets. To no avail!

One time I even queued for hours in the hope of getting some 'return' seats. Nothing!

In 1993 when I moved from Jersey to the UK, I was in a better position, and eventually, sometime down the line, I got my opportunity. Ticket in hand I found myself in the theatre.

It did not disappoint. Loved the songs, loved the staging, the characters. Everything.

And since then I've seen the show about seven times, including once at the Jersey Opera House, a most excellent amateur production a few years back by the Jersey Amateur Dramatic Club. They were amazing, and the best thing was a few of my friends were in the cast. Perfect.

Now, don't worry, I'm not going to go on endlessly about the show, or the film, or the (very long - five 'volumes') book that it's based on. I've read it by the way, and it's a classic!

But just to say, Victor Hugo, the French poet, novelist, and dramatist had started writing the tome in the 1840s but the book Les Misérables  wasn't published until 1862. It's based on events which had taken place around thirty years previously.

Hugo had apparently walked the streets of Paris during the June 1832 rebellion which is the culmination of the novel. He saw those barricades. But the novel - considered one of the greatest of the 19th century - is not just about the conflict and unrest in France over the decades preceding 1832. It's a narrative on poverty, and injustice, and social and class division. Its themes are philosophical as well as historical.

Hugo was not just a writer but also a politician and he had very strong views on issues like social injustice, he was opposed to the death penalty and in favour of freedom of the press, among other things. And this, ultimately, got him into trouble.

When Louis Napoleon, Napoleon III, seized power in France in 1851, he established an anti-parliamentary constitution and when Hugo openly declared him a traitor the writer had to flee the country. He moved first to Brussels and then to Jersey.

Unfortunately he was expelled from this /my lovely island for supporting a local newspaper that had criticised the Queen of England, Queen Victoria. So Hugo moved just across the water to another Channel Island, to Guernsey, where he and his family settled at Hauteville House in St Peter Port. The writer lived in exile from October 1855 until 1870 - and by the way, you can visit the house even today to see how he lived.

It was while he was in Guernsey that Hugo created some of his best work, including completing Les Misérables. It delights me that this classic was written quite close to my home!

Anyway, back to the stage production. And all I'm going to do is share one of the fabulous songs from the show. Hard to choose, so many great tunes but this is one I've selected for you today, sung by the amazing Josh Groban.