If you're feeling a bit jaded, or tired ... here's an optimistic thought for a Tuesday!

Today I choose to believe that Anything is Possible! 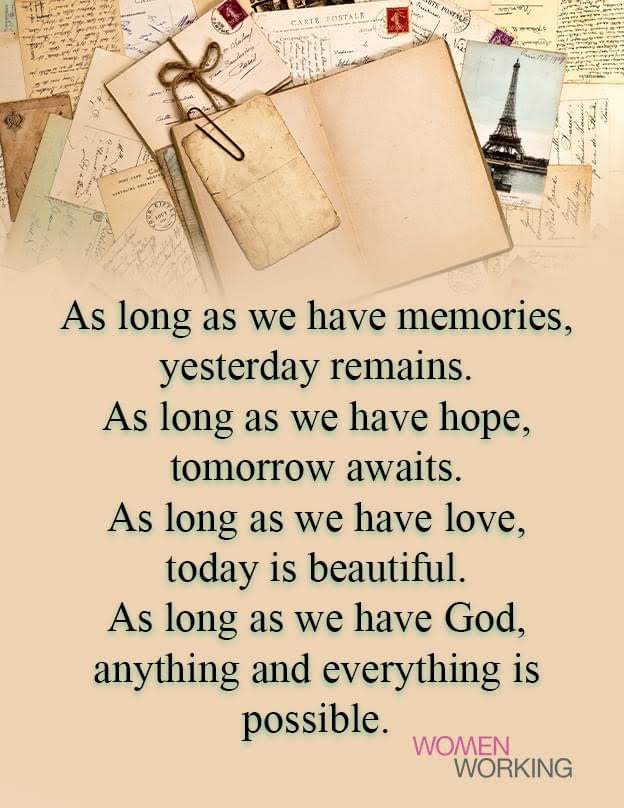 Time for a new week!

None of us knows what the future holds ... and that includes even the next 24 hours.

You may be anxious about what lies ahead this week, or you may be full of excitement.

You may have a whole list of things 'to do' or you may be just going with the flow - waiting for your dreams to begin!

Whatever you're up to ... I hope this week will bring you love, joy and peace. 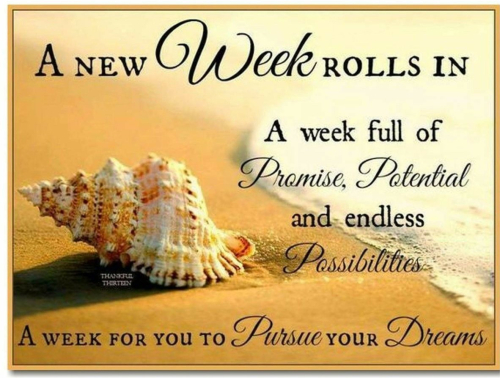 Today I'm turning to wise words from one of the wisest men who ever lived.

He was so wise he's actually a saint - St Augustine!

Augustine was born on this day - November 13th - in the year 354AD ...  and he was a North African Christian theologian and philosopher from a place called Thagaste in the ancient northwest African kingdom of Numidia. So his heritage was Berber.

And why the odd name?

Well it's because Augustine became Bishop of  Hippo Regius - an important city which was incorporated into Roman North Africa - it's the place now known as  Annaba, in Algeria - and it became an important centre for Christianity during Augustine's time.

Augustine's writings influenced not just his own era and the early Christian church in his own region, but his thoughts and proclamations, theology and philosophy were also part of the development of Western philosophy and Western Christianity. In fact, Augustine's thoughts and writings apparently greatly influenced the medieval worldview. What a legend!

Augustine is considered one of the most important 'Church Fathers' of those early years of Christianity, and he (as one of his contemporaries, Jerome, commented) "established anew the ancient Faith".  In purely religious and theological terms, the part of the Christian church that believed in the concept of the Trinity (God as 'three in one' ... the Father, Son and Holy Spirit) closely identified with Augustine's book called On the Trinity.

Augustine is recognized as a saint in the Catholic Church, the Eastern Orthodox Church, and the Anglican Communion but his influence goes deeper than that and extends even to the early Protestant movement.  He is also the patron of a religious order that follows the Rule of Saint Augustine, which Augustine wrote in about 400AD. That order is called the 'Augustinians'. Oh and he's also the patron saint of brewers, printers, theologians, and a number of cities and dioceses.

Augustine theology was not only relevant to his own time, but to future generations right down to us right now. He did pen much that was wise and to celebrate his birthday, here's one of those profound thoughts. 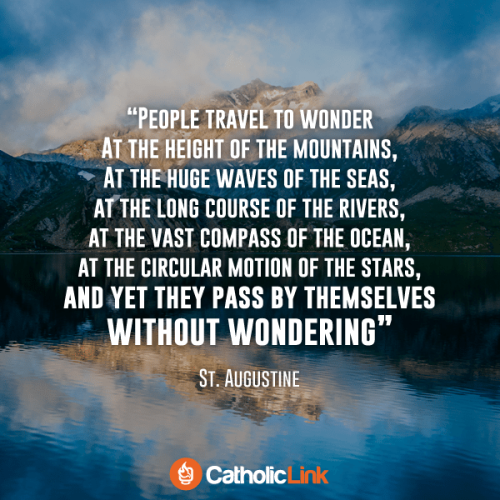 This is so true - we are so often in awe of God's creation - mountains, seas, the ocean, beaches, the universe ... but we don't recognise that WE are part of that creation.

We don't stand back and wonder at the fact that we are here, we are breathing, we are living in this wonderful world!

So maybe, today, we could just take a moment to do that.

To give thanks for the fact that we are here, we have life and there are so many opportunities and possibilities open to us.

Maybe we just need to breathe, take time, look around, appreciate what we have - what we've been given - and wonder at the magnificence of life!

To wonder at our own existence.

And give thanks for people like Augustine of Hippo - for helping us to understand how wonderful life really is!

Sometimes in the morning, I have to admit, I'm a bit slow to rise from my bed.

Especially now, as winter approaches, it's often still dark outside in the morning so that doesn't help!

So, I don't know about you, but sometimes I just need a little bit of encouragement to get me up and get me through the day.

I've been sitting on this thought for quite a while, and I think today is the day to share it.

It's Friday, it's been a very busy week and I still have masses of things on my self-imposed 'to do' list even over the weekend.

But before I start ticking off those 'chores' and meetings and paperwork and official 'stuff' that needs doing today, I'm going to do myself a favour and instead start the day being kind to myself.

This list of 'things to do' of a morning have helped me in the past ... concentrating for just a few moments on prayer and positive thinking along the lines of these Five Things 'to do', before I crawl out from under the covers, certainly means I start the day more optimistic than I might otherwise be.

Hope they encourage you too! 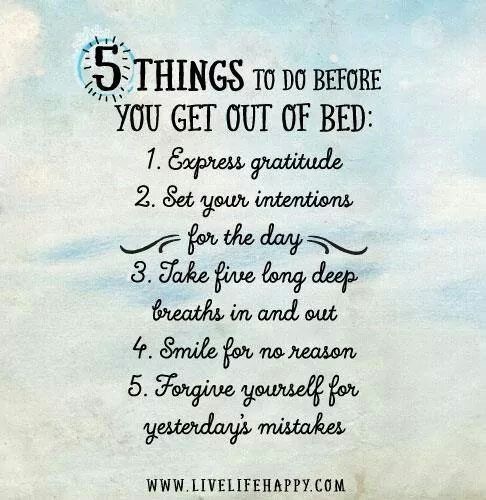 I was thinking about dreams the other day.

I remember when I was a kid, I dreamt of all the places I would go, all the things I would do, all the people I would meet, all the love I would enjoy.

Not all those dreams have 'come true' - that's not the way life works I guess - and some of those wishes won't happen now.

But I still hang on to some of those dreams and I'm still determined that hope is not lost.

I dreamed once of being a writer, of writing books - I'm doing that, even if I have to shoehorn it into a busy life doing other things. I have to work hard on this. Things don't always come easily, sometimes you have to toil but it's worth it in the end.

I've met loads of people in my life, so far, especially in my life as a journalist and broadcaster. I'm still meeting and chatting to people including while writing for a magazine these days - the RURAL magazine in Jersey. What fun!

I've travelled quite a lot in my life and been privileged to enjoy living life in other cultures as well. I still aspire to travel more - I won't give up on that. I may have to wait, but I'll not stop dreaming of new horizons.

And as for love  - well I am surrounded by love of family and friends and although I've loved and lost, I still believe!

Whatever your dreams are - never give up. 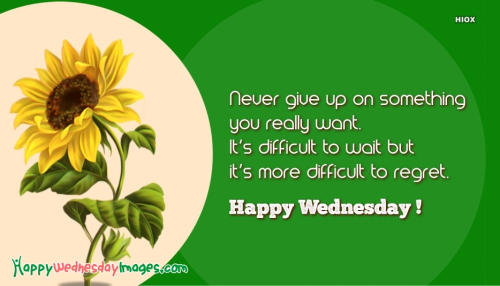 Don't know about you but sometimes when I wake up on a Monday I just want to hide under the covers and pretend it's still the weekend.

But, with lots of do in the next few days, I'm encouraged to be a bit more positive about having to get up today and get moving!

Let's pull on our 'positive pants' and get with it, and be optimistic about what we have to do.

Who knows, this might turn out to be an amazing week? 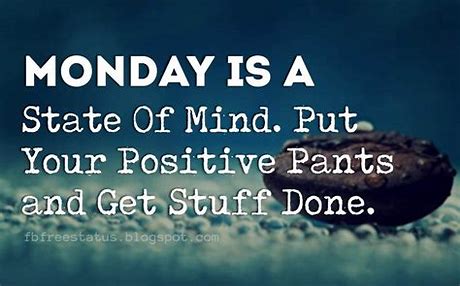 WOW, it's Saturday! At Last!

I've had quite a busy and rather trying week so I have to admit right now I have very little energy and I need a bit of a lie-down.

It also feels like winter is now with us, the temperatures are dropping and it's been really wet, and if you have read this blog regularly you'll know I love the warm weather so you're probably guessing I'm not that keen on the cold and rain.

This picture and 'Saturday saying' makes me feel happy ... sunshine and palm trees and an inspirational thought.

If we haven't got the energy to do anything else this weekend, let's try to laugh (whatever the weather) and share time with those we love.

May we all have a relaxing, restful and Happy Weekend! 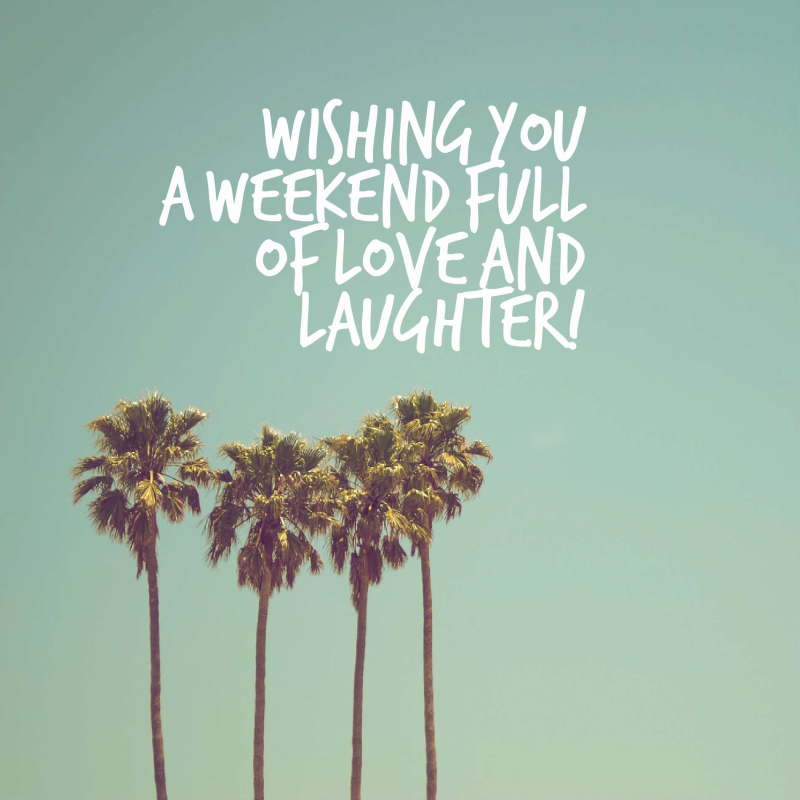 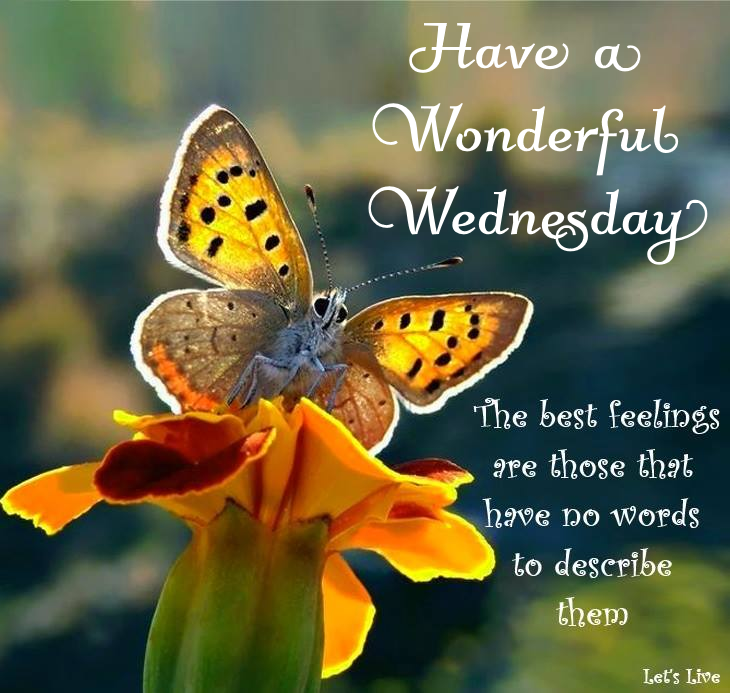 Thoughtful on a Tuesday

Just a quick one for today, which I've chosen to dub  'Thoughtful Tuesday'.

As we know, and as I think I've said quite a few times this year in this daily blog, taking a positive attitude into the day can make a world of difference not just to our wellbeing but to others as well.

A smile, a hand held out to help, a phone call to cheer someone's spirits, saying something helpful or giving someone a compliment. We all know how it feels when someone is nice to us ... so let's return that favour.

Today ... let's consciously determine to do something for someone else that is kind, compassionate and yes ... nice.

Just because we can!

Have a fabulous day! Posted by Cathy Le Feuvre at 08:00 AM in communication, Daily Thoughts, happiness, kindness, Life, mental health, Motivation, One Day at a Time, personal development, thanks and gratitude, wellbeing | Permalink | Comments (0)

Life is Too Short

I saw this online very recently and ... well it's just perfect for a Friday Thought ... or indeed for a thought for any day.

It's from the pen, or mouth, of a very wise man - Nicky Gumbel -  who is, I have to say, one of the finest people I've had the privilege of meeting in my life. Very briefly ... but wow ... what a guy!

The Rev Nicky is the Vicar of Holy Trinity Brompton church in the Diocese of London, Church of England and it was he who helped to develop the Alpha Course, which is an 'introduction to Christianity' course which has changed millions of lives across the globe. I've taken the course and also been an Alpha course leader ... it's just amazing and full of common sense as well as trying to help us unravel the mysteries of faith.

Nicky is well known for his straight speaking and this, I think, is Nicky at his best.

It's a thought which has been picked up by the 'Thy Kingdom Come' prayer movement which started in 2016 as an invitation from the Archbishops of Canterbury and York to the Church of England and has now grown into an international and ecumenical call to prayer involving Christians from across denominations.

However, even if you're not a 'prayer' ... this piece of wisdom is classic. And I hope it inspires you today as it inspires me. 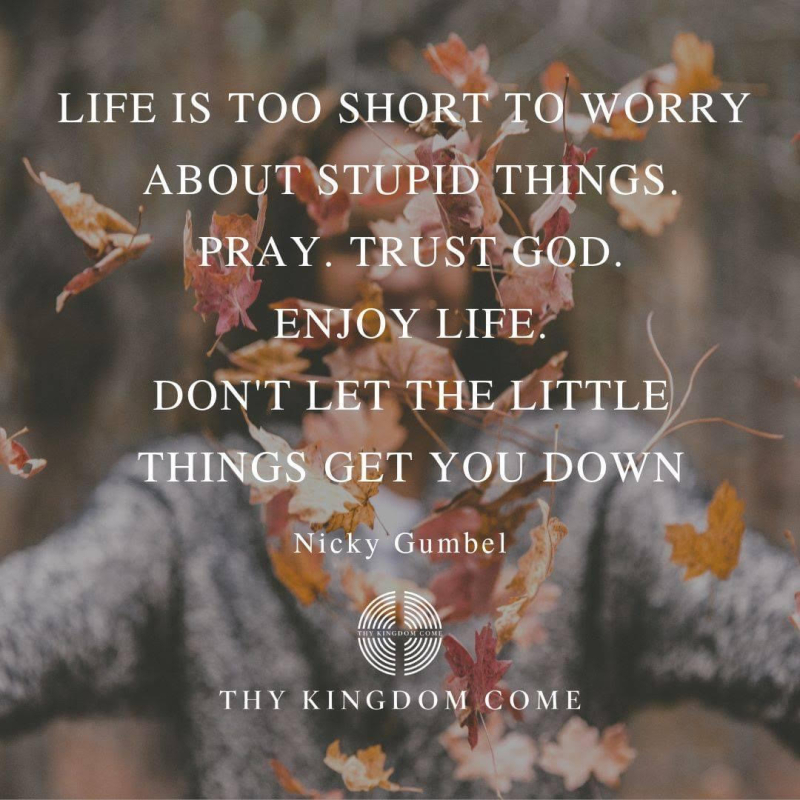