If you've ever taken an 'Exercise Class' you'll love this.

Back in the day it was the thing a lot of us did, not just to 'keep fit', whatever that meant, but also just for the get together with friends. Some of us wore Lycra and leg warmers ... AND SOME OF US DID NOT! Even when I was a LOT thinner than I am today, that skin tight look was not something I favoured.

I have to admit I've never really been a fitness fanatic. I probably should take more exercise, but give me a good swim or a good walk any day rather than all that sweating!

Now don't get me wrong, I'm not dismissing those who do love all that jumping around and take going to the gym very seriously. And I am proud of friends who have taken their fitness in hand over the years and have really gone the extra mile - literally - to make themselves healthier. Because, in my opinion, that has to be the only reason you'd put yourself through all this.

Anyway, back to the Exercise Class. 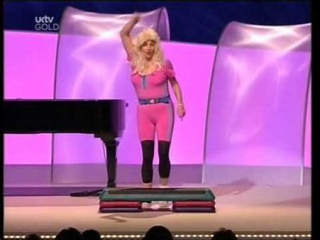 I think one of the things I love about Victoria is that although she was obviously very clever, and rich and famous, she still seemed to appear 'normal'. She struggled with her weight and made no secret of that. She did at times turn her comedy in that direction, was rather self-deprecating, and actually often took on roles, and wrote them for herself, which were certainly NOT glamourous.

Today would have been Victoria's birthday and during her life, which was so sadly cut short in 2016,  she brought us SO much happiness. Not just a comedian, but also a brilliant actress, lyricist, singer, composer, pianist, screenwriter, producer and director. Who can forget her 'silly songs' as well as her amazing performances, not just comedic but also in more serious roles?

If you've never watched 'Housewife, 49' I thoroughly recommend it.  Made for television, it's based on the wartime diaries of Nella Last  and it was written by and starred Victoria Wood, who follows the experiences of an ordinary housewife and mother in the town of Barrow-in-Furness, Lancashire in the north of England, during the Second World War.  It is AMAZING! And I have to say, it's one of my favourite of Victoria's performances and projects.

But maybe that's for another day.

Today I just want us to sit back and have a laugh.

Victoria was just brilliant at 'observational comedy' ... she obviously kept an eagle eye and ear open for all sorts of quirks in people around her and she had a knack of taking those, and little moments in life, and making them hilarious!

There are a few 'blueish' moments, but it's a Classic and she's a Legend!

Believe in Your Dreams

Have you got a dream? Or dreams?

Maybe it's a new business or career? Perhaps it's related to your health and wellbeing, and maybe even your weight?

Perhaps it's a bit more 'spiritual' than that? You'd love to have some 'inner peace', not so much stress and anguish? Maybe you'd like to get to a point where you don't constantly compare yourself to others, and just learn to be happy with yourself and with where YOU are headed, in your time?

During the past year, and the coronavirus pandemic restrictions, we've experienced not just lockdown but also, some of us, loss of loved ones and loss of employment, or loss of self confidence because we've been mostly at home, working from home and not interacting with society or work colleagues.

That might have stifled our dreams. We might have got into a mindset where we can't think beyond this moment, we can't project ourselves even into a short term future. Or we might feel frustrated that some of the things we had hoped for in this past year haven't happened, and many of the dreams we have for the future feel unattainable.

I'm one of the fortunate people in life. I come from a really inspiring family. My parents were inspiring but quiet pioneers in their field, as Christian leaders. And I have three brothers, all of who are brilliant.  They have supported me down the years and continue to do so even though I know I can be a bit random in my decision making.

Today my quote comes from very close to home, from my brother Tim, who is a motivational person par excellence.

During the pandemic, especially, he's been such inspirational model for me. When he couldn't work face-to-face with his clients as a personal trainer he reinvented his work life and is now not only helping people with their physical fitness but also their mindset and emotional wellbeing. He helps people lose weight and feel better about themselves but in the process also helps with the whole body and mind experience.

SO - a blatant unashamed plug here ... if you want to find out more ... I know Tim would love to hear from you. Why not go to Tim's Facebook page -  Tim Le Feuvre | Facebook  to see if he can help? 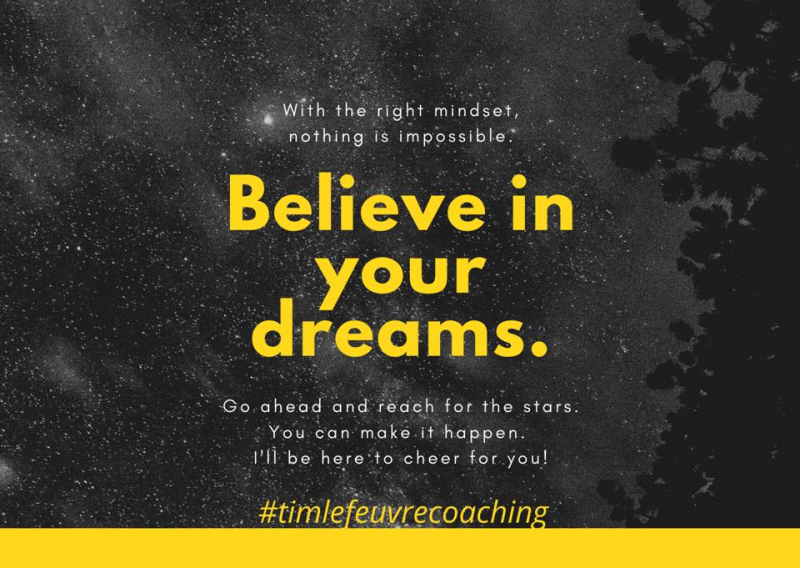