I've been wittering on a bit over the last few days, so today I just bring you a prayer.

I love the Celtic Christian tradition and this won't be the last time I bring you a prayer or blessing from this heritage.

Today here's a blessing to start the day. This is a prayer that has probably been spoken for more than a thousand years, because it dates from the first millennium and attributed to an Irish saint called Brigid of Kildare, otherwise known at Bridget of Gael.

Have a great day!

I arise today
Through a mighty strength:

God's power to guide me,
God's might to uphold me,
God's eyes to watch over me;
God's ear to hear me,
God's word to give me speech,
God's hand to guard me,
God's way to lie before me,
God's shield to shelter me,
God's host to secure me.

I Arise Today (St. Bridget) – A Collection of Prayers

A prayer for the final day of February! 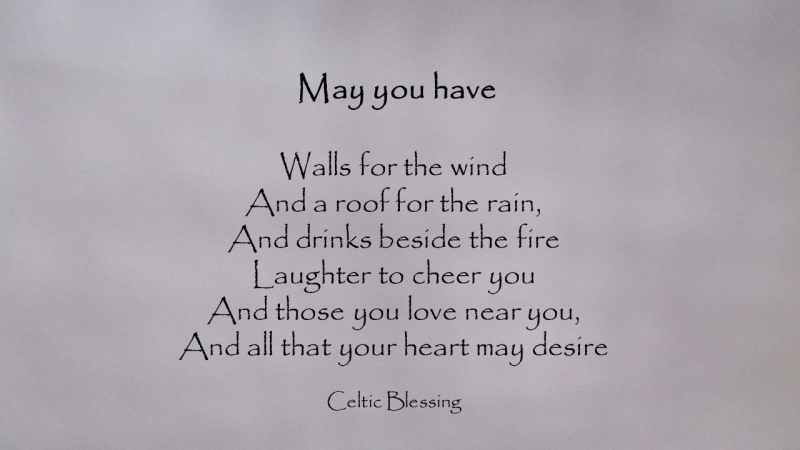 It's the day that Ireland and Irish people or those of Irish descent across the world celebrate - well, BEING Irish - and one of their most important patron saints. In 'normal times' much partying is done , much Guinness is drunk and shamrocks are worn, but importantly it's a day when many people go to church to remember St Patrick and give thanks for him, because it is, first and foremost, a spiritual/holy day.

Don't worry, I'm not going to start a whole essay about St Patrick. That would take far too long because it's a very complicated story, with many twists and turns, legends and stories of miracles.

Patrick wasn't Irish but was born in Roman Britain. When he was about 16 he was captured by Irish pirates and taken as a slave to the island of Ireland, where he mostly looked after animals for about six years. It's while he was looking after those sheep that it's believed he 'found God'. He escaped and managed to get home to his family where he studied Christianity and eventually became a priest. Later he returned to the place where he had been imprisoned to spread the Christian message to the Irish, who mostly practised a form of paganism ... the ancient Celtic religion.

And if you're wondering why the shamrock, or the three leaf clover, is a symbol of Ireland on this day in particular, it's because Patrick is said to have used the little plant with the three leaves to explain the Christian Holy Trinity - God the Father, Son and Holy Spirit - to those he was hoping to convert.

Patrick didn't have it easy. Standing up to the local warlords, often apparently getting beaten up, sometimes being imprisoned and threatened with execution. But he continued his mission and although there is evidence of a Christian presence in Ireland before Patrick, he is generally considered as the founder of the faith there. He became a bishop and is known as the 'Apostle of Ireland',  and his feast day is marked on March 17th, the day it's thought he died.

But we can't be exactly sure. There's lots of mystery surrounding Patrick, even question marks over when he lived. It's generally believed that he was a missionary in Ireland during the fifth century, and by the seventh century, he had become revered as the patron saint of Ireland.

So today, to mark the day and to celebrate the man who was St Patrick and the legacy of faith he brought to Ireland, I leave you with one of my favourite Irish Blessings. 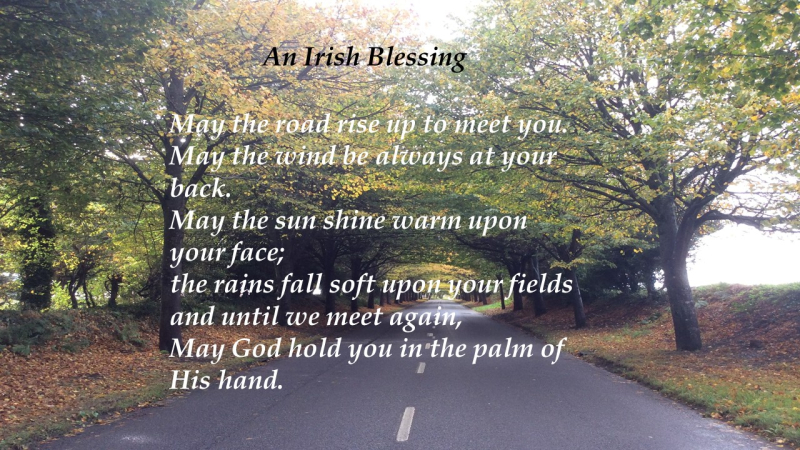 *Oh and if you're wondering, the 'road' in this picture is La Grande Route de St Ouen in Jersey.

This past week I was having a conversation with a friend and in usual fashion, we chatted about anything and everything. Work, frustrations, our health (physical and mental health) ... and along the way the subject of Celtic Christianity came up.

Rather random, I grant you, but it's once again made me think about the ancient faith of many of our British forefathers and mothers, a spiritual tradition and theology which is connected not just to God but also to the earth and nature, the elements and the natural environment around us.

I love this tradition and the sentiments and prayers which come out of it. These days you might often see these defined and described as 'Irish' blessings and prayers, but many of these come if not directly, then indirectly from the Celtic tradition. The fact that many of these blessings are based on very old spiritual traditions inspires me as I realise these prayers have been spoken silently and out loud for many hundreds of years by the faithful. They have brought inspiration and comfort, challenge and affirmation in equal measure.

I don't know anything about you, dear reader, or how you are feeling right now. But what I've learned down the years is that God sometimes gives us a thought which, without knowing it, will help someone else if passed on.

So today I bring you one of those blessings and trust it will bring you whatever YOU need. 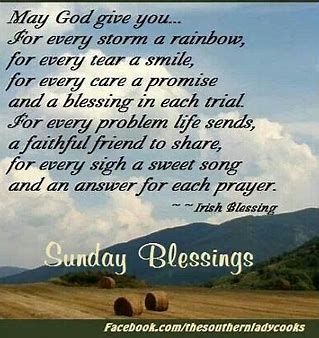 This Sunday I'm turning for inspiration to one of my favourite Christian  traditions - Celtic or Irish spirituality.

There's something in the words of the Celtic blessings and prayers that I think really touches the heart of what we humans want to say and pray, even when we don't know it.

The words are often simple but in their simplicity there is profound meaning which grows in time. Sometimes I have to read these prayers over and over and the power of the words becomes clearer in each reading. In those contemplative moments, we learn more about ourselves and the desires of our heart.

So, today, this is my prayer for you.

Have a wonderful day!

For this Sunday I simply offer this prayer.

From the Celtic tradition, it's a prayer which for many many centuries has been spoken - out loud and in the silence of a prayerful moment -  bringing comfort, challenge and inspiration.

If you have  a moment or two today to think of the Divine and the Almighty ... may I humbly suggest that this might be a good place to start?

Have a blessed day! 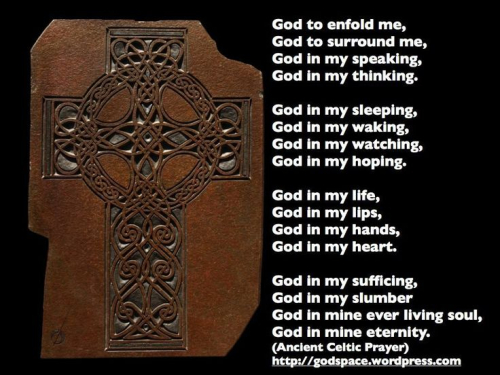 A Prayer for All Hallows' Eve

Today is All Hallows' Eve ... yes I know many of you reading this will say 'It's actually Halloween' but it's one and the same thing.

Except All Hallows' Eve came first!!! 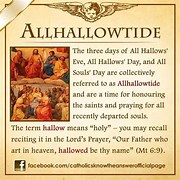 You may not know this but October 31 is actually the first of three significant days in the Christian church - the Allhallowtide season which includes All Hallows' Eve,  All Hallows' Day ... otherwise known as All Saints' Day (Nov 1) ... and All Souls' Day (Nov 2). And it's really all about 'remembrance'. Remembering the dead, including saints (hallows), martyrs, and all those who have left his life.

All Souls' Day is also known as the Commemoration of All the Faithful Departed and the Day of the Dead. It's a day set aside to pray and remember the souls of those who have died. This is observed by Roman Catholics and other Christian denominations annually on November 2.

All Saints' Day, as I said, is also known as All Hallows' Day, the Feast of All Saints, the Feast of All Hallows, the Solemnity of All Saints, and Hallowmas. It's a Christian solemnity or festival in which we celebrate, honour and remember all the saints of the church, known or unknown. It's celebrated on November 1st and is actually considered to be one of the 'holiest' days of the year.

So how did the day before a most holy and solemn day become what it is today - Halloween - considered to be a day which appears to be associated with ghosts and witches and spooky stuff, and evil?

One theory is that it may all go back to the ancient Celtic harvest festivals and particularly the Gaelic festival of Samhain, which is believed to have pagan roots and when people would light bonfires and wear costumes to ward off ghosts. Some believe that when Christianity came along, Samhain was Christianized as All Hallows'  Day, along with its eve. In the eighth century, it's said that Pope Gregory III designated November 1 as a time to honour all saints. Soon, All Saints' Day incorporated some of the traditions of Samhain. The evening before the holy day became known as All Hallows' Eve, and later Halloween. Anyway, it's thought that long ago in Ireland and Britain, Christians would come together on this day to ask for God's blessing and protection from the evil in the world.

Another theory is that Halloween began solely as a Christian vigil of All Hallows' Day. It was celebrated in Ireland and Scotland in the 19th century, and it's thought that Irish and Scottish migrants brought many Halloween customs to North America, and then through American influence, Halloween spread to many other countries by the 21st century with it's activities like trick-or-treating, carving jack-o-lanterns out of pumpkins, festive gatherings, donning costumes and eating treats.

It's now a hugely commercial day but some people do try to resist it and in some parts of the church, instead of Halloween parties, Light Parties are held instead .. to emphasise good rather than evil. Light rather than darkness.

So today instead of playing a spooky song (and there are lots of them) and talking about spells and witches and all that weird, if fun, stuff, I'm turning to a prayer for All Hallows' Eve.

It's just one of the resources produced by the church on this day ... this one is from the Church of England and the Mission Theology Advisory Group which is an ecumenical group formed in partnership between Churches Together in Britain and Ireland and the
Church of England... 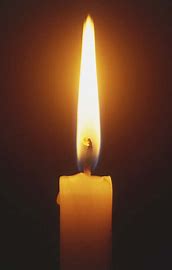 Lord, tonight,
We will face all that most concerns us:
our fears, the shadowed places of the mind;
the coming of winter darkness;
the cold thin place between waking and sleep.

We call to mind the powerless, the lonely,
those who most fear the knock at the door;
all those deceived by the world’s empty promises;
all those cowed by menaces or threats.

We stand with those weak in body, mind or spirit
and those seduced by treats or hurt by tricks.

Lord, your light shines into every darkness.
You told us: pray ‘deliver us from evil’.
Your Spirit gives us hope, gives us courage,
a candle in the window unhurt by the wind.