Every now and again on a Saturday morning I find myself slumped in front of the TV with the remote control, not particularly thinking about what I'm watching.

News? So exhausting and depressing!

Food shows? So many cooking shows with lots of so called celebrities chatting inanely about nothing ... boring! Too many of those and they're all the same.

No, I want a bit of escapism on a weekend ... sit coms and even cartoons.

Now call me childish ( I don't care actually) but SpongeBob SquarePants makes me laugh out loud. It's so silly, yet positive and uplifting.

The cartoon is about a character called SpongeBobSquarePants ... an optimistic yellow sea sponge who lives with his friends underwater, in the fictional submarine city of Bikini Bottom. He lives in a submerged pineapple and his one great ambition in life is to obtain a boat-driving license from Mrs. Puff's Boating School, but he never succeeds.

SpongeBob's favourite things to do include "jellyfishing", catching jellyfish with a net in a manner similar to butterfly catching, and blowing soap bubbles into elaborate shapes. His pet is called Gary - he's a sea snail with a pink shell and a blue body who meows like a cat. His best friend lives two houses away -  Patrick Star, a dim-witted yet friendly pink starfish who resides under a rock.

It's all completely bonkers, and of course, pitched just right for the younger viewer.

SpongeBobSquarePants is an award winning cartoon series which has captivated the imagination of kids since 1999 - several generations of kids have grown up with him and while they are enjoying the colour and silliness they are also learning about marine life and what happens under the sea. What I didn't realise until I started investigating is that SpongeBob's creator - Stephen Hillenburg - was not just an animator but also a marine science educator and teacher.

He was passionate about the marine environment and as well as two Emmy Awards and six Annie Awards for SpongeBob SquarePants, and the Television Animation Award from the American National Cartoonists Society, Hillenburg was also honoured with an accolade from the U.S. environmental advocacy group Heal the Bay for his efforts on highlighting marine life awareness.

Sadly, in 2017, Stephen Hillenburg was diagnosed with amyotrophic lateral sclerosis (ALS). He worked on SpongeBob for as long as possible, but sadly died on November 26th 2018 at the age of 57.

So today, in his honour, I share this SpongeBob thought with you. 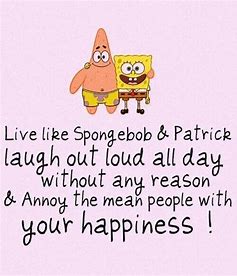 We can all learn from simple things - like a kid's cartoon. For children, life can seem so simple. We adults sometimes just over-complicate things!

That's why, every now and then, I like to sit and drink my Saturday coffee and eat my toast and Marmite (yes, I like Marmite) with a cheery fun-filled SpongeBob and his buddy Patrick, and all the other friends living in Bikini Bottom ... too many to mention here, but if you want to switch them on sometime you'll soon get to know them.

Life can be so depressing and sometimes we just need to step away and into a brighter world and trying smiling and laughing a bit more.

So today, let's be happy. Laugh for no reason whatsoever.

Let's all be More SpongeBob!