Now here's something you may not be aware of.

Every year the day is celebrated on the third Thursday in November .. it was introduced back in 2002 by UNESCO (the United Nations Educational, Scientific and Cultural Organization) with the aim of underlining the value of philosophy for the development of human thought, for each culture and for each individual.

Never fear, I'm not going to go into a diatribe about philosophy. Although I did one course in philosophy back at university, it's not something I've followed that much, although I wish I had.

But if you're wondering .. one description is that 'Philosophy is the study of the nature of reality and existence, of what is possible to know, and of right and wrong behaviour.' It comes from the Greek word phílosophía, meaning 'the love of wisdom' and it's reckoned to be one of the most important fields of human thought as it aspires to help us understand the very meaning of life.

One of the concepts of philosophy is that is teaches us to reflect, to be 'astonished' by the world and by ourselves. It helps us to discover more about others, it encourages dialogue across cultures. The idea of 'awakening' our minds to thinking and to being challenged by other people's thoughts and 'philosophies' can therefore help create better societies, more respect for others, a better world. Philosophy has down the centuries given birth to new ideas, and encouraged human beings to be creative and independent in their thinking. To seek solutions, through thought and analysis and co-operation, to some of the challenges of life and existence. Many believe that 'Philosophy helps consolidate these authentic foundations of peaceful coexistence.'

Ok ... enough.. if you want to find out more about philosophy maybe go online and ask the question 'What is Philosophy?'

There are loads of websites with masses of answers (some of which I admit I can't navigate with my limited brain power and knowledge) ... and one of the best is The Philosophy Foundation

Some of us may have heard some of the names of the ancient philosophers, among them a certain Aristotle... he lived in ancient (classical) Greece - he lived from 384–322 BC... before Christ.

Aristotle was the student of another famous philosopher ... Plato. In their day there were Schools of Philosophy - including the Platonic Academy, the first institution of higher learning in the Western world....maybe a bit like a college or university! Aristotle studied there for 20 years under his tutor and then set up his own school - the Lyceum.

Like many of the ancient philosophers, Aristotle was not just a thinker but what we call a 'polymath', someone who doesn't specialise in just one subject but whose expertise and knowledge spans a wide range of subjects and so can draw on lots of different concepts and knowledge to help solve problems, philosophical and otherwise.

This philosophy thing often encourages us to look not just at others but at ourselves for the solution to our own issues and the problems of the world around us.

And there's a quote from Aristotle which really intrigues me and makes me really think. 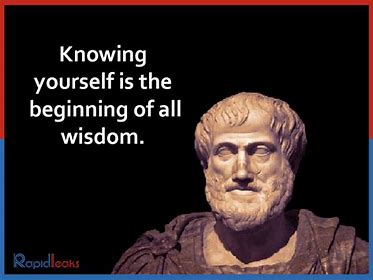 'Knowing yourself is the beginning of all wisdom'

How profound is that?

But what does it mean?

Well, it's something that I am trying to master ... you may have seen a bit of this during this daily blog across the year 2021. I call them my 'ramblings' but actually it's me thinking out loud, reflecting philosophically and in public.

Basically, this quote goes to the heart of what it means to be 'human'.

It's about knowing ourselves first, before we turn to others.

It's about the relationship we have not with others, but with ourselves. We need to know ourselves, not to kid ourselves that we're something we're not.

Look in the mirror and face reality. Face up to not just the things that make us wonderful, but also maybe the flaws that make us imperfect. That idea of 'self knowledge' which is a starting point if we want to live the life we crave or dream of.

If we are to live a happy life, we need to be a happy person.

If we want to live in a positive world, we need to start with our own optimism.

Of course, it's a lot more complicated than that and many many clever people down the years have unpicked this 'thought' from Aristotle and given their interpretations. And this is just mine based on some of the reading I've done and the thinking in my own head which I've attempted.

Often we want to change the world, and we focus on the problems with others. We find it so easy to find fault in others but do we ever look at ourselves, to see if maybe WE are the source of the problems or the discontent around us?

Facing our own demons can be challenging ... it can change us! But we shouldn't be afraid to admit our failings and weaknesses. If we know who we really are, and are honest with ourselves, then we can work on improving our own characters, changing our motivations, shifting our values towards those that build happiness, community and optimism. I'm talking values like kindness, respect, forgiveness, humility, love, compassion.

Being honest with ourselves is also important as we journey towards being true to ourselves.

Let's stop kidding ourselves that we know it all ... maybe we can learn from others, even from people in the past, like Aristotle. These days it feels like a lot of people think we have the monopoly on knowledge ... we forget that people in the past, even in ancient times, lived lives and thought thoughts from which we can learn.

Let's ask ourselves what we want and work out how we might achieve that. Let's get motivated to be happy and positive rather than 'glass half empty' people always wanting more ... things just out of reach. Let's stop believing that the world owes us something and start thinking about what we can give back to the world. Helping others, reaching out a hand of friendship, sharing our talents... I could go on.

And let's stop comparing ourselves with others all the time. That's particularly pertinent in modern times with the birth of social media and the rise of the 'Influencer' ... basically people who think they know better than us. People who tell us what to wear, what to buy, how to look, what to eat, what to weigh, how to behave .... you know what I'm talking about. Many of those 'Influencers' make a living at being arrogantly know-it-all. They get paid loads by companies wanting us to buy their products so we can be 'better' than we are.

'Knowing yourself is the beginning of all wisdom'

Why compare yourself with others? You're great as you are.  You are you. Different. Unique.

Once we face up to ourselves and work out, for ourselves, what it is we want ... then we might start to be happy in ourselves. Maybe there are things we'd like to improve on ... there's nothing wrong with that. But perhaps rather than fixating on conforming with the world around us, we perhaps could become our own 'influencer' and just be happy with being in charge of our own destiny rather than being moulded into another person's 'vision' of what we should be.

Then we may start to have that 'wisdom', that knowledge which philosophers down the centuries have sought.

I know that may not change the world, but it may change MY world ... as I learn to be more comfortable in my own skin, find true happiness maybe not in possessions, but in love and friendship and community.

It might be a lifetime's journey but on this World Philosophy Day, I'm stepping out once again on that road to self discovery.