I know, it might seem longer to some of you, it does sometimes feel like an age to me!

And as the months have progressed, I've turned to my computer oftentimes to gain inspiration for my daily 'thought'.

Historic dates - like yesterday's reflection on the Battle of Hastings in 1066 - and marking days when people have been born, or died, or done amazing things. There are some great websites which are packed full of information. I've learned loads actually!

And then, sometimes, I come across just weird quirky stuff that purportedly happened 'On this day' in history.

I turn to one of my favourite websites which I've often plundered for inspiration - On This Day -and I find this ....

I was hooked. What was all this about?

When we think on Henry the Eighth I guess we automatically think of his six wives ... Catherine of Aragon (Divorced) Anne Boleyn (Beheaded) Jane Seymour (Died) Anne of Cleves (Divorced) Catherine Howard (Beheaded) and the lucky Catherine Parr (Survived).

And, if like me you adore historical films ... you'll think of Henry mostly as a big fat man who could hardly walk or ride a horse, let alone play bowls, so what's all this about? 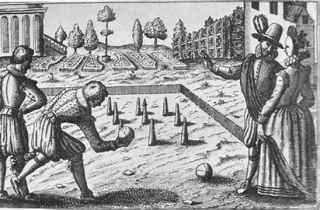 I dug a bit deeper and on a fantastic site called TWISTED-HISTORY.com I discovered that indeed, on this day in 1520, King Henry VIII signed the orders to have bowling lanes installed at his Royal residence - the Palace of Whitehall - in London.

This was before he grew into that old, fat guy so desperate to have a male heir that he would do anything, including killing his wives. In 1520. Henry was still a young man, tall, very attractive to women (and he knew it) and athletic. He was a fit guy and having an indoor bowling lane at his home was a status symbol ... maybe like a super duper indoor gym today, with a swimming pool, outdoor tennis court and a personal cinema all rolled into one.  And he was KING!

So he 'ordered' the bowling lanes to be installed at the palace at Whitehall.  Actually, as King of England, he could 'order' anything he wanted. A new wife, a divorce, a new horse, new clothes, a new adviser ... the only thing he couldn't 'order' was a male heir! How ironic!

But this 'ordering' thing is intriguing and it's got me thinking ... what would I 'order' if I could had that sort of power?

Material things?  A new house ... a cottage or flat by the sea would be ideal for me. Enough money so I don't have to wake up at night worrying about paying the bills or the future. As an author, I'd love to 'order' a best selling book/novel or ten ... that would be amazing. Although probably exhausting!

But actually I think if I could 'order' anything in my life I'd love to live in a world which is loving and kind, not competitive to the point of anguish, and a world where people just get on, less confrontational, no arguments, war and conflict. Some might say that's unrealistic because humans aren't like that... so maybe I'd like to 'order' people to work harder at love and kindness, to make themselves vulnerable to change.  Just to be better at doing this life thing!

I'd like to live in a world where we all try, at least, to get on with each other. Where no one feels they are superior to others. Where we are all treated equally, not judged for our possessions, looks, colour, sexuality, style, status, jobs, the place we live ... you know what I'm talking about.

And yes, I'd like to 'order' a world where resources are more equally shared, so that those of us who have more are willing to give some of that up for those who have little. I live in an island which is beautiful, but unfortunately even here we have a great divide between the 'haves' and the 'have nots'. I would like to 'order' a Jersey where it's not impossible for people to buy a house because costs are so high. I would like to order a world where some people don't have to work three jobs just to pay extortionate rents and to put food on the table for their family.

For that to happen I might have to order some radical social changes and that might not sit well with some people.

And would I want a bowling alley in my house?

Posted by Cathy Le Feuvre at 08:00 AM in Daily Thoughts, Games, History, Life, On This Day, One Day at a Time, Sports, work, Writing | Permalink | Comments (0)