I was privileged to meet him just once ... as a young reporter in Jersey I interviewed him because he was the star of the annual summer parade - The Jersey Battle of Flowers.

Roy Castle was a HUGE personality, a star of stage, screen and TV -  musician, singer, comedian, actor, dancer and television presenter - he was a true legend.

But before that he was well known for his roles on stage, television and film and because of his amazing musical talent - he was an accomplished jazz trumpet player but he could play many other musical instruments. He was also a person of great Christian faith and a family man - years after that meeting with Roy I actually got to know his wife Fiona ... what a lovely family!

I'm thinking about Roy today because it was on this day - September 2nd - in 1994, that he passed away aged just 62. I remember the shock of hearing about his death ... he had lung cancer but he had never smoked. He blamed his illness, which was diagnosed a couple of years earlier, on passive smoking during his years of playing the trumpet in smoky jazz clubs.

Roy was brave. Even in his final months and with his health declining he continued to work hard, including on the high-profile Tour of Hope to raise funds for the erection of the building that would become the Roy Castle Lung Cancer Foundation, the only British charity dedicated solely to defeating lung cancer.  Fiona continued to work with the charity after her husband's death, and campaigned for the British smoking ban which came into effect in Northern Ireland in 2004, Scotland in 2006 and England and Wales in 2007, banning smoking in virtually all enclosed public places.

Sometimes when you meet your heroes, it's a disappointment because they turn out not to be the person you think they are.

But when Roy Castle came to Jersey in 1988 to be 'Mr Battle' at our island's annual floral parade, the highlight of the summer season, the Jersey Battle of Flowers - there was no disappointment.

He was JUST as lovely as I thought he would be. He was jolly and kind, and smiling. A consummate professional and actually a really nice chap. I  interviewed him for the local TV station - Channel TV (ITV) - and filmed him during the Afternoon and the evening Moonlight parades. I saw first hand how hard he worked and how brilliant he was with the public, and us media! There was no 'stardom' about him really - he was full of fun and laughed and chatted to anyone and everyone. People loved him!

That same year - 1988 - Roy presented a TV series for the ITV network which was also close to my heart. 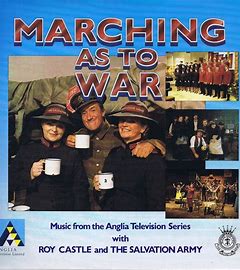 It was called 'Marching as to War' and it told the story of The Salvation Army, it's founders William and Catherine Booth, and explored all sorts of aspects of the work and music of the global church and charity Christian movement.

For me, as a young Salvationist and someone who was working in television at the time, it was exciting to see my church and it's history being shared with the world, and I was thrilled that Roy Castle - so empathetic and compassionate - presented that series of programmes and was able to bring something of his own personal Christian faith to the project. And I know, from talking to people who were in that series with him (some of whom I can still recognise on the films) that Roy was a pleasure and joy to work with!

A few years after the programmes went out I found myself living in Norwich where the series was made by Anglia TV. By the late 90's I was actually working in the network religious department at Anglia ITV. It felt like a circle was complete.

The whole 'Marching as to War' series is available on YouTube, thanks to my friend Rob Westwood-Payne, who also hails from Norwich and who is  now a Salvation Army officer, or minister.

Some of the footage is now rather dated. Times have changed ... among other things, the uniforms are different and some of us don't wear uniforms at all these days ... and of course the world has altered around us.

But the message of Booth and his life-altering mission movement remains as strong today as back in 1988 when the series was made, and in 1865 when William Booth first set up his East London Christian Mission, which in 1878 would be renamed The Salvation Army.

So - if you have half an hour to spare - why not  sit back and enjoy this episode?

It's the one where Roy tells us all about 'Soup, Soap and Salvation' - one of the key message of the early Salvation Army ...