Have you ever read 'War and Peace' ?

It's a mammoth literary piece so not everyone gets to it ... my research tells me that it's 3,958 pages in four volumes and it took the author 10 years to complete. WOW!

That inspired writer was Leo Tolstoy. born on this day - September 9th - in the year 1828. Although there is a bit of a complication on the date ... go to the end of this blog to read more about that!

Tolstoy was an exceptional Russian writer, known not only for the aforementioned major tome published in 1869, but also Anna Karenina  (1878) and many more exceptional works including novels, short stories and novellas, plays and even philosophical essays. He actually received nominations for the Nobel Prize in Literature every year from 1902 to 1906 and for the Nobel Peace Prize in 1901, 1902, and 1909 but he never won either award!

What many people don't know is that in his forties, during the 1870s, Tolstoy went through a crisis which resulted in a spiritual awakening which led him to explore Christianity and the life of Jesus Christ, which is in turn caused him to become a  fervent Christian anarchist and pacifist. In fact, I read that Tolstoy's ideas on nonviolent resistance influenced 20th century figures like Mahatma Gandhi and Martin Luther King Jr.

But back to 'War and Peace' - I admit I have a copy but haven't managed to get through it. Yet. It's one of those things I plan to do when I have a year or two to spare.

I should have read it really because part of my university degree was about modern Russian economic and social history and 'War and Peace' is set in the period before the Russian Revolution and the Soviet era. The novel includes the stories of five Russian aristocratic families - the kind of family that Tolstoy himself was born into - and covers their experiences from the French invasion of Russia in 1812, and the impact of the Napoleonic era on Tsarist society. It also includes chapters on philosophy and history, so it's a pretty good narrative on the culture and systems which preceded modern Russia.

As I said before, the book was first published serially and then in its entirety in 1869. It is still regarded as one of Tolstoy's finest literary achievements and to this day remains an internationally praised classic of world literature. 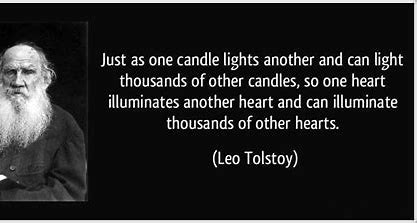 There are so many quotes attributed to Leo Tolstoy - not least from 'War and Peace'. But it's some of his more philosophical thoughts on love, life and faith as well as 'war and peace' that I am impressed by and which challenge my thinking and behaviour.

As I said, he did become a person of great faith and even though he was a controversial character I love this quote from him which looks at the impact we have on others. It's an insight into how our actions may affect the lives of those around us, and a reflection on how we treat others which may lift their spirts as well as our own.

It's also a reminder that one small act can ultimately impact not just one other person, but hosts of others, if the 'light' of kindness, compassion and love is passed on.

It's such a wise thought and it encourages me, today, to be a light in the world rather than adding to the darkness.

Now back to that 'complication' about the date of Leo Tolstoy's birth which I mentioned at the start.

Leo was actually born on August 28th 1828 ... but THAT was in what is known as the 'Old Style' dating system ... under what is known as the Julian calendar, In various European countries this dating system was replaced by the Gregorian calendar between 1582 and the twentieth century. And those using the Julian system 'lost' around 10 days of the calendar when they switched to the Gregorian way of calculating time.

That switch to what was known in Russia as the "Western European calendar" was implemented in Soviet Russia in February 1918 - which effectively meant that the Julian dates of 1–13 February 1918 were dropped. One day it was the 30th January and then everyone woke up to the 14th of February! That must have been really confusing.

And so, even though the change came almost a century after Tolstoy was born ... August 28th becomes September 9th!