Not Lost in Translation

Do you speak more than one language?

Maybe you're multi-lingual or, like me, English is my 'mother tongue' and I only speak a smattering of other languages.

A little French - that's about it. I have a few words of Kiswahili, learned when I was a child in Africa. I can say 'good morning' and 'thanks' in a few other languages but not much more than that! I can't converse in any other that the English language.

Although many people do speak English across the world, for which I'm very grateful, there are times when we go places and we find ourselves in need of help ... we may need a 'translator'. These days there are apps on our 'phones and tech devices that can help us to translate what is being said, but also there are those clever people who make their living translating from one language to another - helping others to communicate.

Today, believe it or not, is International Translation Day  - a day for recognising translation professionals.

Well, today is a celebration of St. Jerome,  who is considered the patron saint of translators. 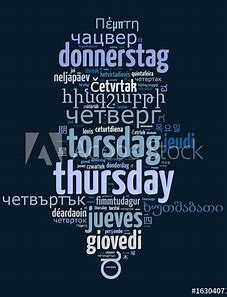 Jerome was a Christian priest, theologian and historian. He is best  known for his translation of most of the Bible into Latin (the translation that became known as the Vulgate) but he also wrote other commentaries on the whole Bible. He was also known for his teachings on the Christian moral life, especially to those living in cosmopolitan centres such as Rome in his time.  Interesting point -  he often focused his attention on the lives of women and identified how a woman devoted to Jesus should live her life. This came about because he was close to several female 'ascetics' from affluent families.

His contribution to Christianity is so appreciated that Jerome is recognised as a saint and Doctor of the Church by the Roman Catholic Church, the Eastern Orthodox Church, the Lutheran Church, and the Anglican Communion.

Today is Jerome's 'feast day' and also ... since 2017 ... a date set aside by the United Nations as the day when we recognise the role of professional translation and translators in connecting nations.  Apart from encouraging us all to celebrate their contribution, the United Nations today also stages an annual St. Jerome Translation Contest for translations in Arabic, Chinese, English, French, Russian, Spanish, and German.

I first saw translators in action when I lived in Africa - people translating sermons in church services without notes, just responding to what was being said from the pulpit! I've also seen translators work at conferences and that's amazing. They have to be so quick-thinking and alert, and the ability to listen to one language and simultaneously translate into another is a wonderful skill.

Helping others to communicate, to break down the barriers between nations and peoples, is an important contribution not just to relationships between individuals but also to peace and understanding in the world.

Sometimes we think, arrogantly, that those who don't understand or speak OUR language must be somehow lacking. And I'm not just talking about French, Spanish, English ... or Swahili or any other 'lingo'! We expect them to be like us, act like us, fit in to our agenda - to 'speak our language' in lots of respects. And that means we may miss out on the diversity of difference. When we don't try to understand where people are coming from, let alone their actual words,  that's a shame.

So today, as we celebrate those brilliant people who help to actually translate conferences, and meetings and correspondence so that everyone is aware of what others are saying and thinking and imagining,  let's also ask ourselves whether we are making the most of our personal communications and interactions with others. Are we deliberately not attempting to understand others? Or is it just we're not paying enough attention or can't be bothered to put in the effort to see another person's viewpoint?

If we are in danger of our relationships getting 'lost in translation',  let's determine to be better communicators, to work harder to understand other people's viewpoints.

Language is very important. Let's use our words wisely and understand the impact negative sentiments may have on another person. Positive words and actions can make us and others feel great and that sort of positivity is contagious.

And if you do fancy learning another language ... well, why not give that a go as well?