It's a date that, of course, goes down in history as one of the saddest and most shocking of modern times.

And today it's 20 years since what has become known as '9/11', that infamous terrorist attack on the United States of America

Four commercial airlines were hijacked mid-flight by 19 al-Qaeda terrorists.  Two of the aircraft were deliberately crashed into the World Trade Centre,  the iconic Twin Towers in New York City, with the subsequent collapse of those towers. A third was crashed into the west side of the Pentagon in Washington DC, the headquarters of the American military. A fourth was also hijacked and was also destined for the USA capital, but the brave passengers on board attempted to gain back control of the aircraft, which subsequently crashed instead in a field near Shanksville, Pennsylvania.

Of course, it's the image of the burning Twin Towers that remains in most of our memories and that's why many of us remember where we were on that day.

At the time I was Head of Broadcast of a small (somewhat experimental) TV station in Hertfordshire in England. It was called 'Home TV' and it broadcast just to the towns of Hertford and nearby Ware and surrounding areas ... the forerunner, one might say, of the small digital and cable stations that sprang up later. We ran local news, sports and weather mostly, mixed in with other interesting 'bought in' programmes and national news from SKY TV.

Some members of my small team and I were in the operations room, the control room from which we controlled transmission. It's a room with lots of TV monitors which allow the directors and engineers to see what's coming in and what being transmitted to our viewers. The SKY TV news feed monitor was always on so we could see what they were running, even if we were not 'taking' the live feed at the time.

It was around 2 o'clock in the afternoon and we were having a news planning meeting for the next upcoming local news bulletin - scheduled for 6pm - when we looked up to see the SKY TV monitor flick to pictures of the World Trade Centre in New York, with one of the towers (the North Tower)  ablaze. We turned up the sound to hear those words 'News coming in of ....'

We all stood there, pretty shocked, I have to say. And then, a few moments later,  we saw it ... the second aircraft plough into the South Tower.

It was devastating! It was at at THAT point that I realised that this had to be a terrorist attack rather than an airline crash or accident.

But with my news head on I also realised that we needed to break into our regular programmes and show what was happening there across the Atlantic in New York City and, as it transpired, in Washington DC and other parts of the USA.

We had to have special permission to dip into SKY TV outside of our contracted hours, so I picked up the phone to their control desk.

All I said was 'Home TV in Hertford, we're taking your news feed now!' I guessed that no one there would be able to answer questions because of the seriousness of the events unfolding, and I figured that if we were in trouble for taking the feed, we'd deal with that later. We flicked live to the SKY TV feed and stayed with it all day. Somehow, news of what was happening in two small provisional towns in the UK seemed immaterial at the time, as did re-runs of cartoons and natural history programmes and sports compilations.

I really can't remember if we did a 6 o'clock bulletin. What with trying to get reaction from local people and working with the small team of largely young and inexperienced staff who were, understandably, rather traumatised by the day, September 11 2001 became a bit of a blur.

It was only when I went home late that night and sat down to watch the national BBC News that the enormity of the day began to settle on me.

That day 2,977 people were killed and more than 6,000 others were injured. The immediate deaths included 265 on the four planes (including the terrorists), 2,606 in the World Trade Centre and in the surrounding area, and 125 at the Pentagon.  Most of those who died were civilians but we know that 344 firefighters and 71 law enforcement officers died in the World Trade Centre and on the ground in New York City. Another law enforcement officer died when United Airlines Flight 93 crashed into that  field near Shanksville and 55 military personnel perished in the attack on the Pentagon.

Of the 2,977 people who died, 2,605 were U.S. citizens and 372 non-U.S. citizens - all were loved, had families, some were dads and mums and grandparents. Each person is a hole in the life of someone else.

9/11 is the deadliest terrorist attack on the USA and, in fact, in world history. Over the past two decades we've seen the experiences of that day played out on TV over and over and over. I think that must just be awful for those who lost someone that day, especially in the Towers, as they are being constantly reminded of their precious loved ones final moments of life.

Of course, we know that the 9/11 attacks led to an invasion of Afghanistan, where the al-Qaeda terrorists were allowed sanctuary, the eventual killing of the mastermind behind it - Osama bin Laden - and 20 years of Allied troops on the ground, with the loss of many more thousands of lives. American and British and other military personnel who were killed or injured in the subsequent years of battle and not forgetting the many many thousands of  innocent Afghanis who got caught in the cross fire. It's only last month - August 2021 - that the allies have moved out, leaving the country once again in disarray and once again under the control of the Taliban ... itself a radical Islamic group. But that's another story.

In the intervening years I was privileged to hear some of the personal stories of those who were directly affected by the events of 9/11. People who were on holiday in New York city and saw the events unfold in front of them. People who served at 'Ground Zero' (the place where the towers fell) for many months afterward, including chaplains and others from The Salvation Army in New York City and the wider north eastern provinces. People back here in the UK who were also affected and traumatised.

So today, as I have done every year  since that infamous day in 2001, I take time out to remember all those precious souls lost on that dreadful day.

I pray for their family, friends, loved ones, colleagues. I pray for the children who never knew their fathers, all those lives unfulfilled and the doors closed too soon.

And I remember them.

It's twenty years since that terrible day and we should NEVER forget them! 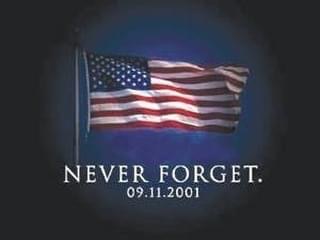 Posted by Cathy Le Feuvre at 08:00 AM in broadcasting, Current Affairs, Daily Thoughts, History, international, news, On This Day, One Day at a Time, prayer, television, work | Permalink | Comments (0)