Friends (I'll be there for you)

Today I'm going to indulge myself a little, and share with you one of my favourite TV programmes of all time.

If I mention the main characters in the sit com in question, many of you will know exactly what show I'm talking about. 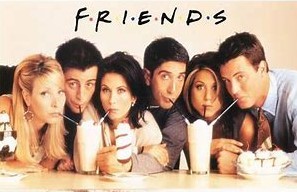 It was on this day - September 22nd - in 1994 that 'Friends' aired for the first time on the American TV network NBC. . It's the unfolding story of six friends in their 20's and 30's who live in New York City. Over ten seasons until May 6th 2004, the final episode, we saw their lives and loves unfold.  Lots of laughter and quirkiness, some tears and tragedy, amazing moments.

I have to say 'Friends' captured my imagination from the get go. I just thought it was so cleverly written - we were drawn into the lives of these people, all of whom were very different and all of whom really were nothing like me. Plus I've never lived in New York ... but it was just fun.  Actually, I found it to be a weekly escape  from the realities and stresses of life - in those days there was no binge watching, we had to wait a week for the next episode!

It became a 'water cooler' type of show, one which we would talk to our friends and family about. My niece, Vicki, in particular was and is a great fan of 'Friends' and it was something we had in common, moments remembered that we could laugh about.  Quoting from 'Friends' is a thing for us! Even now!

This was a sit com which brought people together. It's been described as an one of those 'iconic, culture-defining shows' and although it's been 17 years since the last episode aired, somewhere in the world and in the UK it's playing right now!! And if that ends I always have the boxed set.

Down the years there have been calls for new 'Friends' episodes but this year the cast did come together for a one-off  special called ‘The One Where They Got Back Together’,which celebrated the mega-hit comedy’s 25th anniversary.

Would I want a new series?

Probably not ... it was fun while it lasted but time has moved on. The cast have moved on to new projects but still, if they are reading this (wow wouldn't that be fabulous?) I'd just to to say a HUGE thank you to all the writers and producers and staff who gave us so much pleasure down the years, and especially the Iconic Six - Jennifer Aniston (Rachel), Courteney Cox (Monica), Lisa Kudrow (the weirdly wonderful Phoebe), Matt LeBlanc (Joey), Mathew Perry (Chandler) and David Schwimmer (Ross) - THANK YOU GUYS!

One of the things that defines a great TV show, I think, is the theme tune. Every time you hear it when the show is being aired, it gives you a shiver of anticipation. Now that the show is over and only existing in 're-runs' that theme tune is just like a bit of a comfort blanket.

In the case of 'Friends' it's 'I'll be there for you'' by The Rembrandts, with that iconic chorus which really sums up friendship. Well it does for me, anyway.

In the year or so after 'Friends' was aired for the first time, I was in the USA on holiday, in Florida with a friend and we were out for dinner in the Disney resort area. It was a warm night, masses of people around on the boardwalk and there was a huge TV screen in the central square where, I think, there was a fountain and seating area. We were walking through there and on the screen came the official video for the 'Friends' show! We and loads of other people ended up singing the song  at the top of our lungs ... and laughing until we cried.

What a memory! Fun, friends and feeling happy. Doesn't get much better than that!

I'm blessed to have great friends (and family members) who I know will stick by me, whatever. And I'm so blessed and thankful for that. We may not live in New York City, and actually we're often separated, but true friends will always be there for each other!

So today, to mark the anniversary of the first time the world got to know those six 'Friends' ... here's the official video ... not only featuring The Rembrandts but the main cast members!

Sing along if you want. Out Loud is good.

Posted by Cathy Le Feuvre at 08:00 AM in Arts, broadcasting, culture, Daily Thoughts, media, On This Day, One Day at a Time, television | Permalink | Comments (0)