A Miracle and Mystery

If I was to list the following books ... could you tell me what the link is?

Yes, the well read and clever among you will know they were all written by the same man - Herbert George Wells.

Born on this day - September 21st - in 1886, HG Wells was an English writer and novelist. He actually wrote in many 'genres' - short stories, dozens of novels, and even social commentaries, history, satire, biography and autobiography - but is best known for his science fiction novels and works. In fact, I read that he is sometimes called the "father of science fiction", along with another brilliant author, Jules Verne.

But what I love about people like Wells is that he did it all. Like many of the great authors of the later 19th and early 20th century and some of my favourites - JRR Tolkien, CS Lewis - who weren't just writers but also educators, Wells started out as a teacher. And such was his imagination that he didn't stick to one type of writing, but diversified.

In fact, another of his books - The History of Mr Polly - is one of my favourite reads. It's a 'comic novel' about a man who feels very unfulfilled in life. It's also a bit of a social commentary on the times, English society at the turn of the 20th century, and in particular his descriptions of lower-middle-class life really tells us so much about life in those days.

But of course, it's his science fiction which has grabbed all the attention. Those books listed above have all been made into (several) successful films so lots of us know about the themes.

'The Time Machine' in particular has grabbed the imagination of readers down the years and it's also been credited with  the popularization of the concept of time travel by using a vehicle or device to travel  forward or backward through time - think 'Back to the Future' - love those films!

Actually, it was HG Wells who coined the term "time machine"! What a legend!

I'm absolutely intrigued by the idea of travelling in time, although I always say that I wouldn't want to travel to far into the future ... just a few years here and there to see how life might work out for us might be good for starters. In Wells' novels, and other time travelling works, the reality of  life far into the future is not always what's expected, it's not utopian and it's often overwhelmingly so different that the plot or story invariably doesn't work out well. 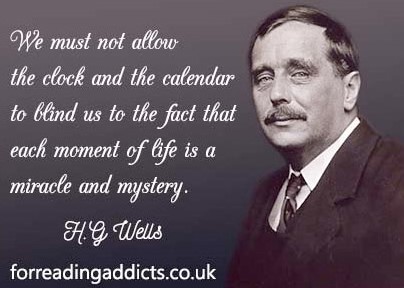 To celebrate HG Wells, today I am sticking with the idea of time ... which he obviously spent a lot of time not just writing, but also thinking about.

'The Time Machine'', which was published in 1895, is not just about a vision of the future, but also a commentary on the increasing inequality and class divisions of late Victorian England. It's also about dreams and aspirations for the future,  but also human ambition and what people will do to see their visions a reality ... and so much more!

As Wells reminds us in this thought, we can get obsessed by time, by always looking ahead and thinking about what might be over the next hill. We might be one of those who always thinks the grass will be greener in the field just down the way. Or one of those people who constantly fixates on what life might be like in the future, when everything is bigger, better and more successful, rather than enjoying THIS day, this moment!

It's a good lesson.

So, to celebrate this day and the life and works of HG Wells, I'm going to try to remember this not just today ... but down the line as well ... (There I go, thinking about the future!)

I love this idea that 'each moment of life is a miracle and mystery'.

May we never take 'today' for granted or risk missing out on the joyful moments of today by always thinking about tomorrow.

Posted by Cathy Le Feuvre at 08:00 AM in Biography, Books, culture, Daily Thoughts, Fiction, Film, inspiration, Literature, movies, On This Day, One Day at a Time, Writing | Permalink | Comments (0)