The Audacity of Hope

On Wednesday January 21st 2009,  I was in a hotel room in Christchurch, New Zealand, having set my alarm for an early wake up call so I could be witness to a truly historic moment.

I was enjoying the last couple of days of an amazing holiday which had taken me first to Australia and then on to the north, and finally the south island of New Zealand.

But although I had spent more than a month virtually cut off from the world, away from the news, enjoying some solo travel and relaxing, I was determined to be part of something which was happening in the USA.

So it was that, at 4am that morning, I turned on the TV to watch the inauguration of the 44th president of the United States of America.

Time-zone wise, Christchurch is 16 hours ahead of Washington DC - hence that early alarm because it was at 12noon in Washington DC on Tuesday January 20th that Barack Obama stood at the West Front of the United States Capitol building and took the presidential oath of office - the first ever African American president of the USA.

What an incredible moment in time and history!

I had followed the future president's journey to the White House over the previous year, read some of his books and was inspired. I think I was particularly intrigued because he has some roots in the country of Kenya, where I grew up. His father was from that country although of course, Barack was born in Hawaii in the USA. His book 'Dreams from My Father' is the first part of his amazing life story.

His second book 'The Audacity of Hope' picks up his story and actually the book explained and unpacked many of the subjects that became part of Barack Obama's 2008 campaign for the presidency.

HOPE became a central feature of the campaign and of the new presidency and that was truly inspirational.

Of course, President Obama would go on to serve another term and among other things later in 2009, he would be honoured wit the Nobel Prize for Peace. The motivation for the prize was President Obama's "...extraordinary efforts to strengthen international diplomacy and cooperation between peoples." This, the Nobel Committee determined, was at the core of inspiring hope for a better future, not just in and for the USA but also for the world. He encouraged dialogue, co-operation between peoples, democracy and human rights, and this was recognised by the Nobel prize, along with his work to combat climate change.

His latest biography - 'A Promised Land'  - focuses on the first couple of years of his time as president. I look forward to Volume 2 !

It's an intangible thing. We can't touch it but we CAN feel it! We can't see it but we can experience it. When things are going wrong or at least not as we expected, it's easy just to cave and give up believing that life CAN be better. It's easy to lose hope.

But no matter how uncertain life might be, let's not lose that hope that sustains us. Let's keep the dreams we have for our lives, for our families, for our futures, alive.

To mark the birthday of President Barack Obama, who was born on this day ... August 4th  ... in 1961, I share an inspiring thought from the man.

Hope - a belief in things not seen. A belief that there are better days ahead!

Now THAT is audacious! 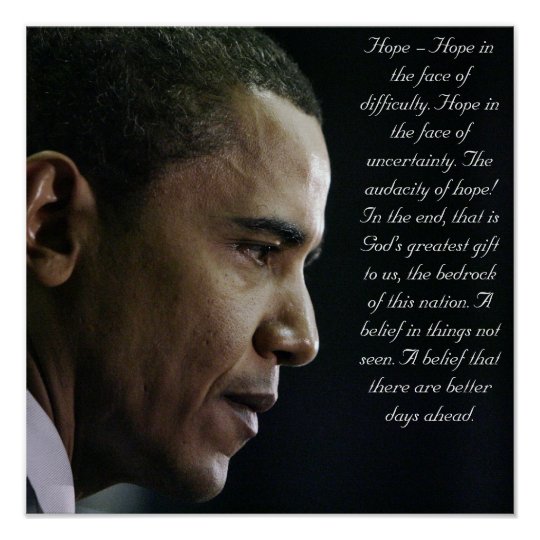 What an inspirational thought!

Oh and an interesting footnote about Barack Obama ... if you've done your sums, you'll know that today is a significant birthday for the great man.

He was 47 when he was first elected as president, one of the youngest American presidents in history - the average age of the presidents is 55 and, as we know even from very recent elections, many of the incumbents of the White House are often much older!