Today I'm turning back time to my early reading days and I'm celebrating one of my favourite authors when I was a child.
The inimitable Enid Blyton!
Born on this day - 11 August - in 1897,  she would become a prolific children's author, bringing joy to generations of young readers including myself. Everything from 'The Famous Five' adventure books to the many 'Noddy' stories, and the fairy tales of the likes of  'The Magic Faraway Tree' and many other fantastical stories of fairies, imps and elves to the series which started with 'The Naughtiest Girl in the School', one of my personal favourites.
I could go on ... but I'll let you fill in the gaps! If you're a Blyton fan you will have YOUR favourites.

All I can say is that Enid Blyton must have had a head full of stories and an imagination to surpass time and place. According to the Enid Blyton Society and EnidBlyton.net who have done the calculations for us, she wrote voraciously including:

Plus, Enid Blyton is also credited with over 10,900 short stories, poems and plays throughout her career, but some were used many times so the actual number is more like 7500! She also wrote under the pseudonym Mary Pollock (her middle name and first married surname)

What an amazing imagination, and what a talent! 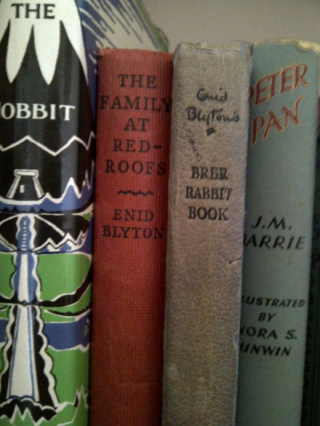 Apart from the fairy tales, some of Enid Blyton's stories explored life, it's fun and it's difficulties, including for children.  It was a way for kids to learn maybe a bit about dealing with life as they read how Miss Blyton's characters deal with what is thrown at them.

With that in mind, top of my list is an amazing book which I read probably when I was very young. I was given this book when I was around 7 and it's lived with me my whole life - indeed, that same hardback copy still sits on my bookshelf, proudly displayed among all the many other books I've acquired in the lifetime since.

It's called 'The Family at Red Roofs' and, for me, it's an absolute classic!

From the first lines it captures the imagination and draws pictures for the readers.

The little white-washed house on the green hillside seemed to smile in the warm sunshine of the bright May day. It sat there snugly in its big patch of gay garden, a white cherry tree out in the front garden, and a golden laburnum hanging over the gate. The gate was painted green and white, and there was a name on it - Red Roofs.

It's the story of a happy family with four children, who move into a new house and then face all sorts of problems. Father has to go abroad for business, Mother falls dangerously ill and then there is news that Father is lost at sea en route to the USA. It's the story of how the children face the future, struggle to survive amid financial and personal disaster and come through with flying colours.

The Family at Red Roofs isn't as well known as many of Enid Blyton's other works, but it was one of the books that opened a world of fantasy to me - a child with a vivid imagination.

There's no doubt that it was Miss Blyton's books that got ME 'scribbling'. I knew nothing about the woman only that I absolutely loved her stories, and wanted to dream up tales, just as she did. So started my lifelong love of daydreaming and writing.

I still maintain that Enid Blyton is to blame every time I find myself sitting on a train wondering just WHY the man sitting opposite me has such an ENORMOUS nose, or find myself listening in to other peoples' peculiar conversations. For me every journey, meeting, experience, is still about soaking up faces, places, names and characters. I did this long before I knew that's what writers do - I did it because I wanted to write ... like Enid Blyton ...  she seemed to me not only able to write, but to write about life, and my life.

But why did The Family at Red Roofs ring such a bell in my head?

Perhaps it was because, aged 7, I was in a family which moved around ... a LOT. By that age, I already had experience of moving home three times, that I could remember. I was also one of four children, although I had three brothers, whereas the the Red Roofs family  consisted of two boys and two girls.

When, aged 8, we moved again - this time to Kenya in Africa - I found myself in boarding school hundreds of miles from home, I initially felt excited. I imagined the place would be just like Whyteleafe School where there would be high jinx, just like in The Naughtiest Girl in the School.

Of course, seeing my parents' vehicle pull away from the school, disappearing down a long drive and knowing I would not see them for at least three weeks, broke the spell. It unfortunately began a prolonged period of homesickness, but at least I had enjoyed the long drive up to Nyeri Primary School, thanks to Miss Blyton's magic and my innocence.

But it wasn't just Enid Blyton's stories and characters that I loved, but also her writing style. I read from a very young age, and soaked up language like others consumed food. As I explored her books and stories, so I was exploring the English language.

Imagine my horror, years after I first snuck away to curl up on a chair in a corner of a quiet room to feast on Miss Blyton's latest story, when I discovered that she was not beloved by all.

Many 'experts' claimed her use of language and vocabulary was restrictive and limited, even at the time I was reading her as a child. Some didn't like her 'tone' and literary 'devices', criticising her for presenting too 'rosy' a view of the world. Even in the 1950s and 1960s apparently she was banned from some libraries and in the early 21st century it came to light that the BBC had actually had a ban on the dramatization of Blyton works during those two decades.

However, if the 7 or 8-year-old me had known this it would not have made a blind bit of difference - I loved her stories! And, what is more important, so did many millions of other children.

We didn't - and in my case still don't care - that Miss Blyton, whose main work preceded the second half of the 20th century, was or is considered 'old fashioned' or 'not politically correct'.

I don't mind that in Red Roofs the very first paragraph includes the word 'gay' - a 'gay garden'. At the time of writing, the word 'gay' had none of the sexual and even controversial overtones which it has now. It simply meant 'happy' and 'glad', among other lovely adjectives.

Although some of her works have, over the years, been altered to ensure that they are not offensive to the modern reader, it has to be remembered that Enid Blyton not only came from another generation but really another world which has long since passed away. If her language is now considered unacceptable, it is not her fault. If some of her stories are naïve, we must remember that she was writing for children who lived in a world where they were allowed to be children. In Enid Blyton's day there were no 'teenagers', that peculiar place between childhood and adulthood. Children, especially middle and upper class British children, would grow up soon enough but while they were young they were allowed to be children. There was not the modern pressure to fast track into adult behaviour while still in childhood.

Ironically, my favourite Blyton book - The Family at Red Roofs - does tackle exactly this theme, the need for children to grow up quickly in the face of adversity. Although in true Blyton fashion everything 'works out well in the end', perhaps that was why I loved this book so much. It wasn't all 'sunshine and flowers'! Perhaps she wasn't so out of touch with modern reality as some think!

So, I will not let the fact that retrospectively Enid Blyton has been considered rather poor taste in some quarters detract from my childhood enjoyment of her writing and the joy her stories brought me. Neither will I let it interfere with my memories and my gratitude to her for the gift she gave me - a love of books and a love of reading!

So - thanks Miss Blyton! You're one of my heroes!

And  just a final note ... it you want to read more about Miss Blyton and her life and work,  then you might like to know that I have re-worked this blog from an early version which is on anther of my websites .. on HubPages ...

Click on 'Lashings of Enid Blyton Fun' and you'll also learn how Miss Blyton's home in a place called Beaconsfield in Buckinghamshire features in a very special model village!

Posted by Cathy Le Feuvre at 08:00 AM in Books, children, culture, Daily Thoughts, inspiration, Literature, On This Day, One Day at a Time, Writing, youth | Permalink | Comments (0)