Breathe in The Extra Day

Today is a public holiday here in Jersey in the Channel Islands - a 'bank holiday'.

It's also an extra holiday day in England, Wales and Northern Ireland but not in Scotland. I'll tell you why in a few moments time.

But why do we have the 'August Bank Holiday' on the last Monday of the month?

Those of you who are old enough may remember when it wasn't always on that day... following a trial period which began in 1965, the last Monday of August was fixed as a public holiday in 1971. Not so long ago really.

In Scotland - here comes that fact I promised - today is NOT a bank holiday because they have their late summer holiday weekend earlier in the month. This year the Scottish had their bank holiday on Monday August 2nd because THEIRS always falls on the FIRST Monday of the month.

The chosen dates sort of also fit in well with the school year in the various nations. Scottish schools go back to class in August, whereas schools in the rest of the UK and in the British islands like Jersey don't return to school until early September. The long bank holiday weekend is supposed to be a way of helping us all enjoy the last moments of summer.

In fact, the August bank holiday was first introduced as a way to give us ALL a chance to make the most of the summer and ... interesting point here ... all four nations used to enjoy August bank holiday on the same date, actually on that first Monday of the month. However, in the early 1970s it was moved in most of the British nations, because apparently it clashed with the 'traditional' two week shut down that many companies went through in the summer... no point having an extra day off if people were already on holidays!

We need to go further back in history to discover where all this began. It was in 1871 that the Bank Holidays Act was passed by the British parliament and that formalised days like this. But if we wind the clock back even more, we discover that up until 1834 apparently there were 33 public holidays in the UK consisting of saint’s days and religious festivals.

Then some party pooper thought people were having too much time off and the public holidays were reduced to just four!

Actually the clue as to why these public holidays eventually became known as 'Bank' holidays is that the law was introduced into parliament and promoted by the Liberal Politician Sir John Lubbock, who was a banker as well as a parliamentarian. He was also apparently cricket-mad, and rumours abounded that Sir John actually chose his bank holiday dates to fit in with cricket matches in his home county!

It was his Bank Holidays Act of 1871 that made the four public holidays official. In fact, people were so grateful that for a while after that law was passed public holidays were called “St Lubbock's Days”.  That didn't stick, obviously!

These days we in the British Isles and the UK have eight public or bank holidays in total - New Year, Good Friday, Easter Monday, May Day, late May bank holiday (originally to coincide with the Christian festival of Whitsun ... it's the Monday after Pentecost)  ... August Bank holiday, of course ... and then Christmas Day and Boxing Day!

These are days to enjoy and celebrate with the family, days to rest and relax during busy periods of the year, and in the case of today - the August Bank Holiday - a day hopefully to enjoy one final glorious day of summer before we all tuck ourselves back into the routine of life come September. 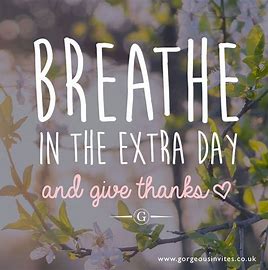 Actually, some might say that we're a little hard done by because other countries do have more public holidays, Apparently India enjoys 21 public holidays and only Mexico has fewer than us here in the UK / Great Britain, with just seven.

I know, I know, lots of people especially those who employ others and run businesses feel a bit hard done by because they have to pay people for eight days they don't work on, as well as their statutory annual leave! And if people DO have to work the Bank Holiday they are entitled to a day off in lieu. But ... life is not all about profit ... is it?

Today ...  let's put all that aside and enjoy today. It's the last Bank Holiday here for months and months... next stop Christmas!

So ... time to just relax and give thanks.

Let's be grateful for those who have gone before,  who pioneered the extra days we now enjoy. Back in the day many people got NO holidays at all so those four original public holidays must have been very welcomed as a day to rest.

And let's just take a deep breath, enjoy the space were are afforded, and....

Have a wonderful Monday!!

Oh - by the way, if you want to find out more about all this stuff you could start, as I did, with this  website link - Nine things you might not know about bank holidays!

Posted by Cathy Le Feuvre at 08:00 AM in business, culture, Daily Thoughts, heritage, History, One Day at a Time, seasons, thanks and gratitude, traditions, work | Permalink | Comments (0)