What's in a Name?

Not just our actual birth name, or the name you have chosen for yourself, but how we are known in the world, and to those around us.

On this day - 22 July - in 1478 a man called Philip was born. He would become ruler of the  Burgundian Netherlands which is sort of the area which now incorporates among other locations, present-day Belgium, The Netherlands  and Luxembourg.

He was also titular Duke of Burgundy (1482 - 1506) in present-day France. And he was the first Habsburg King of the Spanish kingdom of Castile for a brief time in 1506, before his death in September of that year, when he was had the regnal title of Philip I. 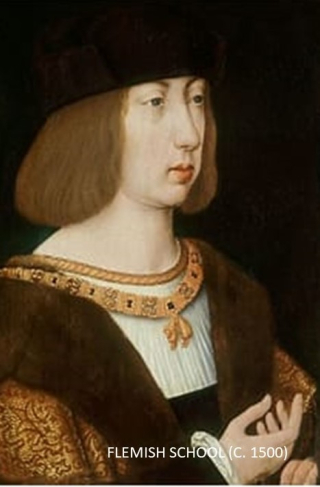 He was born into royalty and power. All these titles and territories were part of Philip's inheritance ... he was the son of  Maximilian I, Holy Roman Emperor and Mary of Burgundy, and he was less than four years old when his mother died, and upon her death, he inherited the Burgundian Netherlands. An arranged marriage in 1496 to Joanna, the second daughter of Queen Isabella I of Castile and King Ferdinand II of Aragon, put him in line for more.

When her mother died in 1504, Joanna inherited the thrones of Castile and Aragon, and she became Queen of Castile which meant that Philip was proclaimed King in 1506, Sad story but when he died a few months later Joanna was left distraught with grief which gave her father, and her own son, Charles, an opportunity to seize power. Joanna was deemed insane and imprisoned for the rest of her life.

Life was harsh in those says.

An aside here, Joanna was actually an elder sister to Catherine of Aragon, who would later become Queen of England, and the first of King Henry VIII's six wives!

But back to Philip ... he apparently was well known not just for his status and titles, but also for his good looks. He had fair hair and 'attractive grey-blue eyes' and so he became known as 'Philip the Handsome' or 'Philip the Fair'.

So, with all the things he did in his life, all the places he owned and the countries he reigned over, the obvious love he shared with his wife given her grief when he passed away, Philip's overriding legacy is that he was good looking!

Now, I don't know what he was like as a man, maybe he enjoyed that sort of admiration, perhaps he was vain and loved all the attention. But he might also be turning in his grave, wanting to shout out very loudly ...  'I WAS SO MUCH MORE THAN JUST PRETTY!'

Which has got me thinking.

What will our legacy be?

Philip is known as 'Philip the Handsome'. Do you want to be remembered just as 'Polly the Pretty' or 'George the Good Looking?'

How about 'Rachel the Rich' or 'Fred the Financier'? 'Peter the Powerful'? 'Brenda the Business Owner'? 'Cathy the Clever'? 'Norah the Negative'?

'Patsy from the Posh House'? 'Bernard with the Big Car'? 'Dorcas of the Designer Outfits'?

I've just picked names out of the blue here ... no offense intended. But you see what I'm getting at?

How do I want to be remembered?

'Cathy the Rich, Famous, gorgeous'?' The person who lived in a big house, drove a huge car, wore designer gear and had a huge bank account? The person who was defined by the job they did, but not much more? The man or woman who went to flash parties and showed off a lot?

Or would I rather my legacy be more meaningful?

'Bernard the Brave'? 'Patsy the Prayerful'? 'Charles the Caring'? 'Keith the Kind'? 'Rachel the Respectful?' 'Fred the Forgiving'? 'George the Generous'? 'Harriet the Hospitable'? 'Laura the Loving'? 'Polly the Peaceful'? 'Thomas the Thankful'? 'Norah  ... the Positive'?

When people think about us, and about our name, what 'values' might they assign to us? What will they remember us for? Will they remember our smile, our kindness, our caring nature, the love we gave?  Or will they remember that we lived in the big house, drove the big car, was obsessed by our looks and our status in life with little thought of others?

What's in a Name?

As I remember Philip the Handsome today, I'm minded to also think on this ... and to maybe consider a change in my attitude and behaviour now, before it's too late.

What's in MY Name?

Big Thinking Stuff for a Thursday!

Posted by Cathy Le Feuvre at 08:00 AM in Biography, Daily Thoughts, History, kindness, love, Motivation, On This Day, One Day at a Time | Permalink | Comments (0)