If you hadn't guessed it yet - I love words!

I saw this quote and it made me laugh out loud. 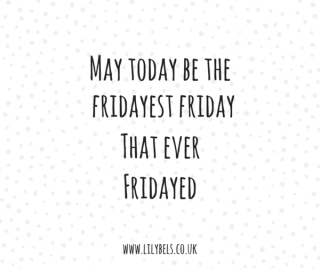 Don't you love that?

I wish I'd thought of it!

Because in my mind it sort of sums up what Friday should be about ... awesome, fabulous, a bit of a relief because we've come to the end of the week ... the 'Fridayest Friday' in fact!

This quote got me thinking about one of my favourite subjects - WORDS.

I'm fascinated by language and words actually and especially intrigued as to WHY certain things are called what they are called.

For the longest time when I was a kid I was obsessed by the English word 'cup' ... I know, that's a bit weird but it's true!

What kept spinning around in my head was this question ... WHY is that vessel we drink from called a 'CUP' ?

I have no idea why that word got me, but if you just listen to the word and try not to think about the object it's describing, it's a very strange sound.

Say it out loud and you'll get what I'm talking about. I'm sure there are other words which sound just as odd, when disembodied from the visual image of what it is describing. But it was 'CUP' that made me think endlessly.

The Oxford Dictionary of Word Origins tells me that the word is from the Old English and comes originally from the Latin word 'cuppa'. But that doesn't help me really. WHO decided that the strange sounding word 'cuppa' was a good way of describing that sort of vessel? Whoever it was, I bet they never guessed that that Latin word would also make it's way into the English language.

I feel like a 'cuppa' tea just thinking about it.

There ARE some words, of course, that DO make more sense because they sort of describe how the thing SOUNDS. That's an example of what we call 'onomatopoeia'. I love these kinds of words.

SNAP, BANG, BEEP, POP ... I could go on, there are masses of these words. I'm sure you can dream up a list of your own.

But the thing I love about language is that it's always developing. New words are often being introduced into our (English) language as culture develops.

For example, when I was a kid we didn't have the words 'social media' or 'internet' or 'cell/ mobile phone', 'emoji'  - those techy terms just for starters. And the coronavirus/ COVID19 pandemic has also resulted in a whole new set of words we had never or hardly heard before early 2020.

If  you follow the Oxford English Dictionary's 'new' word trail you'll find that new phrases and words are constantly being added to the lexicon. In July 2020, for instance, the New Words section of the OED included now familiar phrases such as 'contact tracing', 'contact tracer', 'physical distancing' and even 'Zoom' as we all turned to the internet to stay in touch during lockdowns. They are all now in the dictionary.

When it comes to making up words, however, in my experience the Champion of the World has to be the amazing author Roald Dahl who is best known, of course, for his children's books and stories, many of which are a bit surreal.

He often made up words including those that are onomatopoeic. Words like 'churgle' , which describes gurgling with laughter, and 'bibble', a perfect description of how water makes a soft gurgling sound when it hits ...  a giant peach! And how about 'scrumdiddlyumptious' - delicious!

Roald Dahl also made up words which sort of incorporate sounds and words we already know ... how about 'Giganticus' which  describes something ' Grand and spectacular'. Or 'Jumpsy; which is if you feel anxious and the slightest thing will make you jump.

Dahl called his language 'Gobblefunk' and he apparently made up nearly 400 words - over 300 for his fabulous story 'The BFG' (The Big Friendly Giant). If you want to investigate some of his word inventions there are loads of website sites including The Wonderful World of Dahl: GOBBLEFUNK: Dahl Dictionary and Matilda Gobblefunk: A Dictionary of Roald Dahl’s Made-Up Words

Sometimes the writer just mixed up English words. One of his heroes is 'Esio Trot' ... Tortoise backwards. And if you've ever heard someone talk a load of old nonsense then you've experienced Dahl's 'Rommytot' - TommyRot!

But there are just bonkers words which Roald Dahl made up ... conjured out of his own imagination.

My favourites include those that are written on the walls of the Roald Dahl Museum and Story Centre in Great Missenden in Buckinghamshire in England ...see my pictures of the place below ..

Many moons ago just as I was about to go into my final English exam at high school - my final 'A-level' exam - my teacher, who was standing at the door giving all her students some last minute encouragement, said to me "Cathy you ARE capable of getting an 'A' today ... but only if, just today, YOU DON'T MAKE UP ANY WORDS!"

Yes, I was well known even then, aged 18, for making up words. I often wrote a word which would, in my mind, sound right but which was actually a mixture of already existing words. It was something my English teacher picked up on, and although not discouraging me in my imaginative wordsmithing, was just reminding me that the examiners might not quite understand my brain!

And, by the way, on that June morning, I did resist confloberating a few words, and I did get an A in the English 'A-level'... top marks!

So, back to my thought for this day. 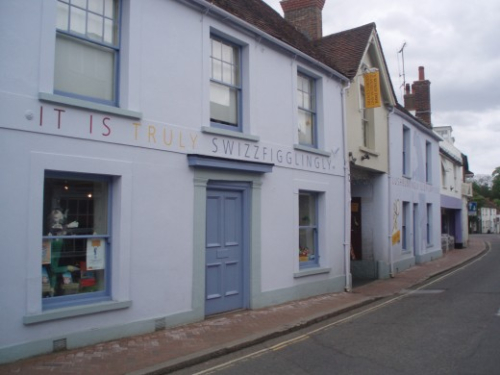 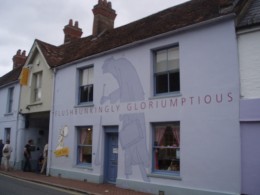 Visit if you can ... it's 'Whoopsy-splunkers' - Fantastic!