Today I'm remembering one of my heroines.

She was a fantastic writer, an artist and illustrator, a farmer, natural scientist and conservationist! And just an AMAZING person, a woman before her time!

Her stories have given hours and hours of pleasure to generations of children in the last century, with her incredible creatures - Peter Rabbit, Mrs Tiggy-Winkle, Mr Jeremy Fisher, Jemima Puddle-Duck and so many more.

Born on this day - July 28 - in 1866 she grew up in a strict middle-class Victorian home, educated by governesses and isolated from other children. Apart from her brother, young Beatrix's main companions were her numerous pets and early on she started painting pictures of them and making up stories. Beatrix and her family took holidays in Scotland and in the north west of England, in the Lake District, and as she grew she learned to love and closely observe landscape, flora and fauna.

Beatrix studied and made watercolours especially of fungi, and she first became well respected in the field of mycology. the study of fungi.

By all accounts she was not just an exceptional talent, but also frustrated at home, feeling trapped. She didn't care to do what other girls of her time were expected to do ... get married to the 'right' man and produce lots of offspring. She wanted more. She wanted a career, to do something useful with her life. She bucked the trends of her day.

By the time she was in her thirties, she turned to writing and illustrating stories for children. 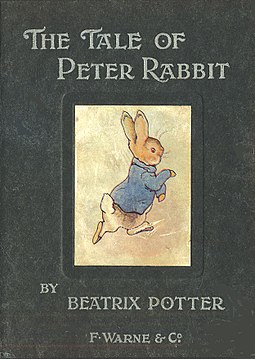 Her first book, 'The Tale of Peter Rabbit', started out as a story for a little boy she knew, five-year-old Noel Moore who was the son of one of Beatrix's former governesses, Annie Carter Moore. Beatrix drew pictures and made up the story in 1893 and in 1901 she revised it and offered it to some publishers. When it was rejected, she decided to print copies herself but a year later it was picked up by the publishing house Frederick Warne & Co.

With its central character a naughty and mischievous little rabbit who gets into, and is chased around, the garden of  Mr. McGregor, the book was almost immediately a huge success, capturing the imagination not just of children but of their parents. It's a simple story - Peter escapes and returns home to his mother, who puts him to bed with a cup of chamomile tea - but the exquisite pictures have helped to make it one of the best-selling books in history. In the years after its publication it was reprinted multiple times and in the century since it was published it's sold more than 45million copies and has been translated  into 36 languages.

After Peter's success, Beatrix began writing and illustrating children's books full time and she let her imagination run wild, writing many stories based around what have become iconic animal characters ... some of whom I mentioned before. She wrote 30 books, 23 of which were her children's tales.

She was also a canny businesswoman. As early as 1903, Beatrix made and patented a Peter Rabbit doll and this was followed by other merchandise - painting books, board games, wall-paper, figurines, and even baby blankets and china tea-sets. Warne and Co licensed these and they and Beatrix reaped the financial benefits.  She became a very rich woman, and within a few years of that first book she was able to move out of home and the restrictive influence of her parents in London.

In 1905 she had been unofficially engaged to her publisher, Norman Warne, much against her controlling parents wishes. Sadly Norman died unexpectedly a month later and Beatrix was then even more determined to move out of the family home. That same year, with the proceeds from the stories and merchandising, and a legacy from an aunt, she bought Hill Top Farm in the village of Near Sawrey in the Lake District in Cumbria, near Lake Windermere.

And this is where her story takes an unexpected twist. Living in the Lake District, Beatrix became aware that much of this beautiful land was under threat of being bought up for housing development for the ever expanding population of the northwest of England.

Over a period of decades, she gradually bought more farms, and so preserved the unique hill country. Her busy writing was eventually replaced by her passion for land and conservation and farming. She became a prize-winning breeder of native Herdwick sheep and she was  a prosperous farmer. When she died  in December 1943 at the age of 77 Beatrix left almost all her property to the National Trust and this legacy means she is credited with preserving much of the land that now makes up the Lake District National Park.

And she didn't live her life without love. Beatrix eventually DID marry - in 1913 aged 47, she married William Heelis, a respected local solicitor from the town of  Hawkshead.

Beatrix Potter was a force of nature. She refused to be constrained by the 'rules' and expectations of her day. She walked her own road and allowed her creativity to thrive. She was determined to follow her own path, even if that scandalised her parents and other 'respectable' folk. She made a fantastic success of her life, and her legacy lives on not just in all those amazing stories, but also in the beautiful Lake District National Park.

As a writer I'm inspired by Beatrix Potter and am a little envious, truth be told, of her imagination and her determination. I need more of that!

She once said that she never really 'grew up' and that was the basis of her story-telling. She also apparently said she was pleased she didn't go to school because that might have robbed her of her originality.

But this is my favourite quote from Beatrix Potter. She obviously LOVED writing ... she was excited by the prospect of putting pen to paper. Bringing her animal friends to life was a joy, but she allowed them to tell their own story.

Some writers report that sometimes characters in their stories DO almost manifest themselves through the writing and that's happened to me once in a while.

To do that, I must simply allow my imagination to go wild, just as Beatrix did.

Thanks Miss Potter - may your stories always not just entertain but also inspire!!! 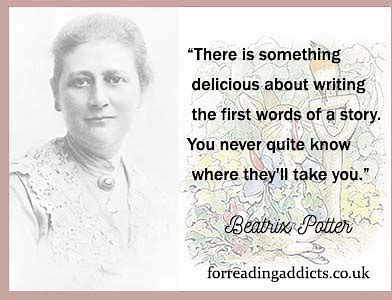