All we need is Love

Here's another one of my 'favourite films' moments.

Ok, so it's a bit unseasonal ... but today I'm thinking about the 2003 movie Love Actually.

It's associated with Christmas, of course, because it's set in that season. But as the title indicates, it's all really about love.

Why am thinking about this ... in July?

Well it's not to do with the whole 'Christmas in July' thing, I can assure you!

No it's because there's a song in the movie, near the start of the film, which is one of my favourites. 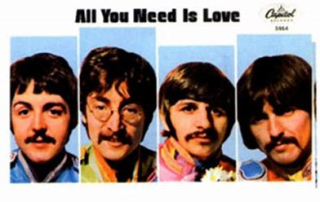 I'm talking, of course, about All you Need is Love, from the 'Fab Four' - the Beatles!

Although it was written by John Lennon, it was credited to the Lennon–McCartney song-writing partnership. Lennon apparently deliberately wrote lyrics that were simple because the song was actually written not just for the British market, but for s specific global event and it needed to have international appeal.

All you Need is Love was Britain's contribution to Our World, the world's first live global TV special. The Beatles were filmed performing the song at EMI Studios in London on 25 June 1967 and the programme was broadcast via satellite, and seen by over 400 million people in 25 countries.

It's one of those songs that's in our psyche and in our history. It's certainly in mine.

Many of us can just sing along. It's a song which with the constant repetition of the chorus 'All you need is love' .. has a powerful message. And it's not about love we can't attain. It's about doing everything with love.

I mentioned that on Sunday, but it's definitely worth the repetition.

So - combining one of my favourite songs, with a favoured movie... here it is - as featured in Love Actually.

It's a strong reminder of something that's really important, and which - if we all just tried to love a little bit more -  could change the world.

Posted by Cathy Le Feuvre at 08:00 AM in Arts, broadcasting, culture, Daily Thoughts, Film, international, love, movies, Music, On This Day, One Day at a Time, song, television | Permalink | Comments (0)