You Affect the World

If you're as old as I am you will remember a time before the Internet.

In those days we had to write letters to people or chat to them on the 'phone if we want to communicate with them.

If we wanted to research subjects we had to look at books called 'encyclopaedias' or visit the local library to check out books with the information you needed.

Work was certainly different before the computer age. Yes I am one of those who used a manual typewriter and certainly, as a reporter/journalist, I had to do much more leg-work when it came to research. No looking up people, contacts and subjects on the internet. And actually that meant one got to talk to people face-to-face, which in some cases meant being braver than I certainly was in the early days.

Then came (Sir) Tim Berners-Lee, one of the early pioneers of computer science. Born on this day - June 8 - in 1955, he is best known as the inventor of the World Wide Web, which today of course connects us all. He invented the WWW in 1989 and by 1993-94 it started to become widely available and the likes of you and I could create and browse websites to our hearts content.

These days, of course, most of us use the internet, some for good but unfortunately some not.

Many of us use computers and the connectivity it provides to do that all important research. How did I know that today was Tim Berners-Lee's birthday? Well a website told me so. All I had to do was to type 'on this day' into a search engine and there, at my fingertips, was a host of information about 'stuff' that happened on this day in history, people who were born and died, music released, and much more more.

At the click of a mouse I am able to find out a bit more about the World Wide Web which Sir Tim invented, and connect you to that information - just click the 'hyperlink' !

And I can even find quotes attributed to the great man, including this one ... 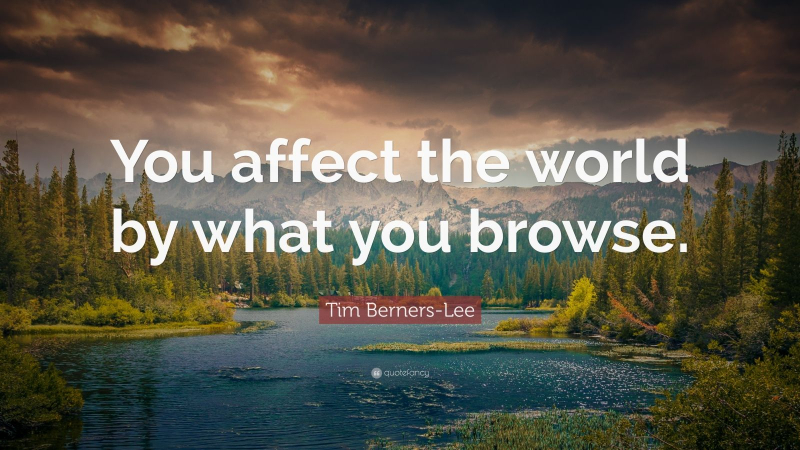 This I think is a profound thought.

Sir Tim has of course always been an advocate of the web, and ensuring it is freely available to everyone. But he has over the years spoken and warned us about its misuse. In 2019 he unveiled a global plan to 'save' the web from malevolent forces like fake news, violations of privacy, political manipulation and the other 'darkness' which some use the web for.

The Contract for the Web  calls on governments, business and companies and all of us individuals to protect the web from abuse and ensure it benefits humanity. Sir Tim has warned that otherwise the world could plunge into a “digital dystopia”.

While most of us use the internet, many are fearful of its power to corrupt, and even its size and that is justifiable. Lots of 'bad' stuff does happen online but I would say lots of good things happen too.

Take social media for example. Some use it to bully and harass and 'troll' others. People they may not even know but just because they can post, oftentimes anonymously, things they probably would be unlikely to say if they were face-to-face with their victims. Not just 'celebrities' but anyone they can get their teeth into.

Many of us, however, try to use the internet and social media for good, to share positive messages and thoughts, to support each other, even at a distance. The internet has made keeping in touch with family and friends much easier and I for one am grateful to the likes of Tim Berners-Lee for bringing us all together.

And this quote from the great man reminds me that it's down to us all to make the world, and the internet, a better place.

We do affect the world by what we 'browse'.  All of us who populate the web with content rely on people clicking on the links. By browsing stuff that is not good for us, well ... that can corrupt us when we are online, and when we've switched off our tablets and computers! By 'following' those social media accounts that represent the bullies and trolls we perpetuate their existence. Even by clicking 'like' on horrid comments we give them space and license.

It doesn't mean we can't post debate that is constructive but I think, as the Contract for the Web says, it is down to us all to monitor our own behaviour.

We can't turn back time to the days before the internet, and why would we want to do that? But we can all be part of creating a future where the World Wide Web is overwhelmingly positive in its use and influence.

And that has to be good for all aspects of our lives, and our world!

Posted by Cathy Le Feuvre at 08:00 AM in culture, Daily Thoughts, internet, Inventions, On This Day, One Day at a Time, quotes, social media, Technology, Web/Tech, Weblogs | Permalink | Comments (0)