About this time of the year in the northern hemisphere of our planet, it's the longest day of the year.

Between about June 20 and 22nd there is more daylight than darkness, more days of sunshine hopefully because it's the moment when the path of the sun is farthest north. For those of us north of equator, it's the beginning of what is called 'astronomical summer'! Otherwise known as 'Summer Solstice'.

And this year the beginning of that season ... midsummer ... is today -  June 21 - when give or take the UK will enjoy around 16 hours and 38 minutes of daylight, with the sun rising before 5am and setting around 9.30pm.

Summer Solstice (and actually Winter Solstice which here falls on or around December 21st) has always had cultural,  spiritual and even religious significance for humankind. Many cultures assign importance to the elements and the seasons and so this is a time for celebration, holidays, festivals and rituals. In many countries and regions this is associated with religion and even fertility as the Summer Solstice marks the time when crops are growing, nature is thriving and people are enjoying the goodness of life and are optimistic for the future.

At places like Stonehenge - the circle of prehistoric Standing Stones on Salisbury Plain in the county of Wiltshire in England - ceremonies to mark the rising of the sun on this day have been held for thousands of years, as people recognised the religious significance of the mysticism of creation.

The Summer Solstice was and still is a marker for the year and the rolling out of the seasons. Neolithic humans may initially have started to observe the summer solstice as a way to figure out when to plant and harvest crops. We know that in Ancient Egypt, the summer solstice corresponded with the rise of the Nile River so it helped people to predict the annual flooding, and that was obviously related to the viability of their crops along the banks of the river, and the potential harvests later in the year. If you fancy reading more about this time of year there is loads online, including a great website hosted by the History Channel.

But the significance of days like today transcends nature. Before humans understood how the earth interacts with our sun and why the days of light and darkness differ according to the seasons, this period of long days of daylight would have been connected with mysticism and powerful messages about the universe. The word Solstice is derived from the Latin words sol (Sun) and sistere (to stand still) ... this day it would have felt as if the sun was motionless in the heavens and so it would have had some spiritual significance and traditions and behaviours developed around the day.

According to pagan folklore, evil spirits would appear on the Summer Solstice so in order to ward these off, people would wear protective garlands of herbs and flowers. Some midsummer traditions involve dancing around the 'maypole'. Bonfires were lit, also to help banish those demons and evil spirits. Ancient 'magic' was thought to be strongest at this time of year and those bonfires were also thought to lead girls to their future husbands - again linked to that sign of fertility.

The Summer Solstice is often associated with the ancient religions which pre-date Christianity and were closely aligned to nature and the seasons. And regardless of whether we are people of 'faith' or not, the Summer Solstice is a time when we can appreciate the warmth of the sun and the potential in our world, and be inspired for the future.

I could have given you all kinds of quotes about Summer Solstice today ... there are masses online ... but I found this prayer which, as a person of faith, says it all for me.

Enjoy this long day everyone!

And if you're in the southern hemisphere ... be assured that as you are now halfway through your 'winter', summer is on its way! 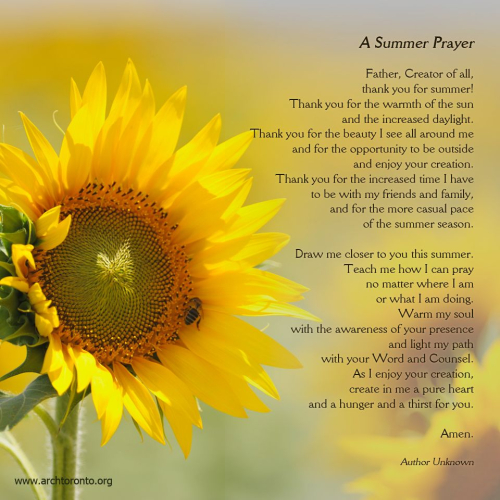