Today I'm thinking about my Dad.

Why? Because today would have been his 100th birthday!

That seems incredible to me. He was born in 1921, when the 20th century was still relatively new. It feels like a universe away from 2021 ... with technology at our fingertips, the internet, air travel, modern medicine, social media. I could go on. In the past 100 years the world has 'developed' beyond imagination.

When my Dad came into the world, The War to End all Wars had ended just a few years before ... and of course these days we know it as 'The First World War' so actually another global conflict would come within a couple of decades. And as a 19-year-old my Dad would be involved, fighting for our freedom!

After a relatively privileged childhood in the lovely and quiet island of Jersey, as the beloved youngest son, that must have been such a shock to his system.

Five years and more later he was a civilian again and destined to spend his life as a farmer in his home island until God got involved and he became a Christian. He spoke so eloquently of the change that came into his life when he met Jesus and it altered his whole perspective on life and his future. With my Mum, who he would meet in those early days of his life as a Christian, he would devote himself to ministry in The Salvation 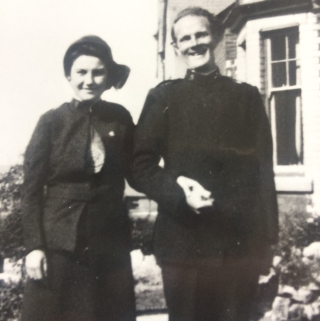 Army church, including working with Mum leading churches across the UK and then as missionaries in Africa. And raising four children. Often, I know, living on very little, sacrificing much for his family and just being wonderful really.

Kind, a gentleman, hardworking, funny - his puns were more than 'Dad Jokes' - and loved by many, including those who came under his ministry and leadership and who he mentored and nurtured.

But for me he was just my 'Dad' and I his little girl.

If I take myself back in time in my head and heart I can still feel his hug, and see his smile, and hear him singing 'Here we go again, Happy as can be ... All Good Pals, and Jolly Good Company' in the car as we travelled along.  Teaching me to swim by holding my hands, gripped safely in his palms and gradually letting me go to fend for myself. I can still hear him encouraging me as he taught me to drive and being SO surprised when I passed first time, although he never let on that he wasn't sure I was ready for the test. I can still hear his laughter, his head tilted to one side as he smiled. I can still see him digging in the garden and working with the cows on that farm in Kenya, places I know he loved especially. Coming in at the end of the day, covered with African dust and dirt. Holidays on the beach in Jersey with his sand creations - tables we could sit at for lunch, like huge practical sandcastles. And on those glorious beaches in Kenya, playing table tennis with us kids. So many many memories 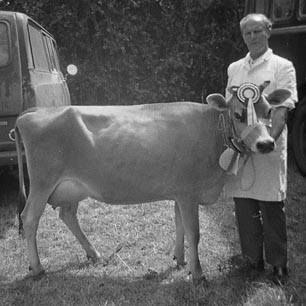 For years after he passed away aged just 63 I expected him to pop his head around a door with a smile saying 'Got you!' His sense of humour still lingers in my heart.

As I grow older, closing in on the age Dad was when he died ... or 'Promoted to Glory' as they say in The Salvation Army church to which he was devoted ... I think I appreciate him more and more. I have at times felt 'robbed' that we and the world didn't have him for longer, because he had so much to give in life, but I am grateful for the time we did have.

I am thankful that he was .. he is ... my father. I feel honoured to have had such Christian examples in my Dad and Mum and to have been raised with love. My brothers and I are very privileged to have love like that because I'm aware not everyone has that in their lives.

And although I still miss him every day, I thank God for my Dad. A man who was, in reality, from another era. In fact, his parents were Victorian so he was raised in a different world really and his life spanned some of the biggest changes of the 20th century. So apart from the war, Dad lived through challenging and tumultuous times! Heaven knows what he would have made of the internet and social media and all the stuff which surrounds us and determines our lives today.

But I think Dad would have faced it all with strength and wisdom and humour, because he was that person throughout his life.

Posted by Cathy Le Feuvre at 08:00 AM in Biography, Christian, Daily Thoughts, Faith, family, inspiration, love, On This Day, One Day at a Time | Permalink | Comments (0)