I'm not a classical music buff, and not particularly knowledgeable either.

I like a bit of Beethoven and Mozart and a few other random composers but I have a lot to learn about that musical genre that we now call 'classical'.

But there is a piece of music that I love and which has specific memories for me. 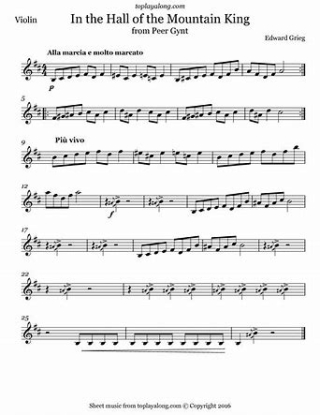 It's a piece of orchestral music called 'In the Hall of the Mountain King' by a Norwegian composer called Edvard Greig, who was actually born on this day - June 15th - in 1843.

It's from a wider composition or Opus called 'Peer Gynt' which was written for a five act play created in verse by another famous Norwegian - the playwright and  dramatist Henrik Ibsen.

'Peer Gynt' is thought to be based on a Norwegian fairy tale, and it's about a boy called Peer Gynt who was a rascal. He stole things, played tricks and never helped his mother. He was disliked by all who met him.

One day he went to a wedding and met a beautiful girl called Solveig. He fell in love and was determined to marry her, but Solveig's parents knew Peer's reputation and sent him on his way. Heartbroken, he left his village because he couldn't bear the thought of seeing Solveig knowing she could never be his. He ran into the mountains where he could be alone and that's where his adventures began.

Peer arrived at the castle of the Mountain King, where disgustingly ugly trolls caught him and took him to the king, who was furious that someone had entered his domain.

But he liked the look of the young man and when Peer persuaded the king that we wanted to stay, the monarch was happy for him to remain in the mountain kingdom so long as the young man marry his daughter. Although she was beautiful, she was not a patch on Solveig, and anyway in order to marry her, Peer was told he would have to be transformed into a troll - one of those mythical Norwegian/Scandinavian creatures that is generally unfriendly and even thought in some cases to be evil.

Peer decided he did not want to be a troll and he made plans to sneak off when it was dark. Before his escape he stole jewels from the king, filled his pockets and ran. However, the troll guards heard him, and he was chased and surrounded. The stolen gold and jewels were discovered and he was dragged back to the castle where he was kept in prison until he agreed to marry the king's daughter, Anitra.

That's just part of the story but it's one that sticks in my mind.

And that's because I learnt about it in school.

I clearly remember my teacher, Mrs Jones, playing us the music that Grieg composed in 1867 for Ibsen's play, and telling us the story of Peer Gynt. Then we all had to draw pictures from the different scenes in the story and I remember drawing one - very badly because I am and never was an artist - of Peer in the Hall of the Mountain King and being chased by the trolls.

That must have been fifty years ago or thereabouts but still I remember that lesson or series of lessons. The story of Peer Gynt fascinated me then and it still does now. I didn't realise at the time what an iconic piece of music 'Peer Gynt' is ... listen to it below and you may recognise it.

But on this day as I think about that piece of music, and the man who composed it, I also remember Mrs Jones.  And thank her, all these years later, for opening another door into the world for me.

There are a few teachers I remember from my school years but not all!

Some teachers just have a knack of bringing subjects to life. They are often not appreciated by their students or even the wider world, and some rarely receive the recognition they deserve.

So today I say thank you not just to Mrs Jones, but to all the wonderful engaging teachers past, present and future. You may not think you're making any impact at all but there again you may be creating memories that last a lifetime for your students.

Meanwhile, here's that piece of music that inspires me ...

I give you Edvard Greig's 'In the Hall of the Mountain King'....