Let me Count the Ways

I think I've said it before but I love a bit of poetry.

And today I'm sharing with you probably one of the most well known love poems of all time. One I absolutely adore.

Elizabeth Barrett Browning was an English poet who lived in the early to mid 19th century (she actually died on this day - June 29th - in 1861) and she was one of the most popular and celebrated poets of her time. At one point she was so popular that she was  considered a rival to Tennyson as a candidate for Poet Laureate when William Wordsworth died in 1850. These days, she is best known for her love poetry, but she is so much more.

Elizabeth Barrett wrote prolifically and was considered rather unconventional because she wasn't afraid to express views on the social and political issues of the day - industrialisation, slavery, religion, and the problems faced by women and what it was like to be a woman at that time. Her writings and poems are considered by some as among the earliest 'feminist' texts. She certainly didn't hold back on her opinion and she felt that through poetry she could affect the world. It's known that as a young girl she declared that she was a ‘great admirer’ of Mary Wollstonecraft, also an English writer, philosopher, and advocate of women's rights whose work A Vindication of the Rights of Woman (1792) influenced Elizabeth's views on the position of women in society.

Elizabeth had begun writing early on - some says she wrote her first poems around the age of four  - and by the time she was a young woman she was a successful published poet. But she wasn't a well person, suffering from a spinal condition and later in life, lung problems.

She was in her late 30s when, in 1844 she published her two-volume Poems, which made her one of the most popular writers in England and, more importantly for her future happiness, impressed another poet and playwright, Robert Browning.

They met and began corresponding and this led perhaps to one of the most famous courtships in literature and history. They married in secret, because Elizabeth knew her father would disapprove. In fact Mr Barrett disinherited Elizabeth when he discovered she had married ... he actually did this to all his children when they married. The couple moved to Italy where eventually they had a son ... that was in 1849 when Elizabeth was 43.

A year later she published the poem for which Elizabeth Barrett Browning is probably best known ... 'How do I love thee?' (Sonnet 43 in her Sonnets from the Portuguese). Robert encouraged her in her writing, including publishing some of her love poems.

Thank goodness he did ... otherwise we might not had the pleasure of reading such beautiful words as these ... 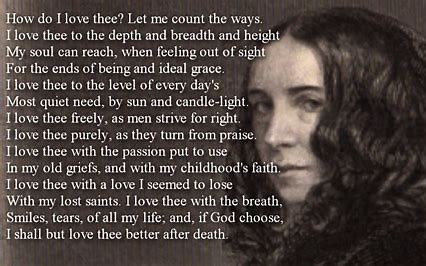 Posted by Cathy Le Feuvre at 08:00 AM in Arts, Biography, culture, Daily Thoughts, inspiration, On This Day, One Day at a Time, poetry, women, Writing | Permalink | Comments (0)