A Dark Day in History

It's not a date that you may know as important in history but for the people of the Channel Islands, and for Jersey and Guernsey in particular, it's a significant day.

It was a Friday and since September 1939 Great Britain, including the British Crown Dependencies - the Bailiwicks of Jersey and Guernsey, and the Isle of Man - were at war with Germany.

The first months of what is now known as the Second World War (1939-1945) is known as the 'Phoney War'. Relatively little happened in the way of conflict but it was in that time that Hitler began working seriously on his plans for world domination. Nazi influence grew in the homeland, and  troops began to flood across Europe, gradually encroaching on France. On May 10, 1940 the Nazis invaded the Netherlands, Luxembourg and Belgium in a 'blitzkrieg' (German for “lightning war”) and then their sights were set on France.

Allied troops based in Europe were moved back by the advancing enemy and by the end of May 1940 many thousands of the British Expeditionary Force (BEF) and other Allied troops were cornered in or near a small coastal town in the top most northern point of France near to the border with Belgium. Between May 26th and June 4th 1940 during what has become known as the Battle of Dunkirk (Dunkerque) an estimated 338,000 Allied forces were evacuated from Dunkirk, across the English Channel to England, as German forces closed in on them. The massive operation, involving hundreds of naval and civilian vessels, became known as the “Miracle of Dunkirk”.

With the defences now virtually non-existent, on June 22nd 1940 France surrendered, or at least agreed to an Armistice with German forces which came into effect after midnight on June 25th. As far as Hitler was concerned, next it would be Great Britain.

If you know where the Channel Islands are and the history of the time, you'll know what comes next.

The Channel Islands are actually VERY close to France. The islands sit in the Bay of St Malo, and Jersey is the nearest to the French mainland - just 14 miles (or 22 km) away. On a good day from Jersey's East Coast we can see not just the French coast, but even houses and wind turbines on the French side of the small channel which separates us.

By the end of June 1940, after months of anticipation, it had become clear that occupation of the islands was inevitable. The Germans were just across the water!

In summer of 1940 Hitler seemed unstoppable as he raced through Europe and was now almost in waving distance of the British mainland from northern France and the Low Countries. For Hitler, taking the Channel Islands was a big deal. Invading and occupying Jersey, Guernsey, Alderney and Sark would be a PR coup and, he hoped, strike fear into the hearts of the British people and their government in London, headed up by Winston Churchill.  It's reckoned he thought invading the Channel Islands would be a signal that he was on his way! Soon he would be marching through London in victory!

It was on July 1st 1940 that the Germans DID invade the Channel Islands - actually the only place in the British Isles to be invaded and occupied by German Nazi forces - and so began five long years of Occupation.

In the final weeks of 'freedom' confusion reigned. Many people with means and/or family in the UK had already left but now many thousands decided to evacuate, not wanting to hang around for the Nazis. The British government had made the decision that, to save lives, it would be best not to engage in military conflict with the Germans when they eventually came. There had been some British forces based in the islands, but by June 20th, any remaining military personnel had been withdrawn, so leaving an 'open door' for the enemy to invade.

Unfortunately no one told the German High Command. 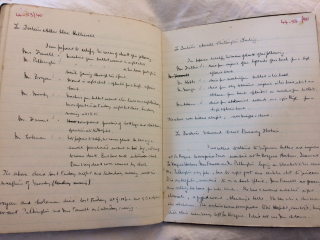 On June 28th, being unaware that the islands were undefended, there was a German bombing raid on Guernsey and Jersey in which 44 islanders were killed  - nine in Jersey and the remaining poor souls in Guernsey. There was a desperate scuffle to inform the enemy of the situation, including a belated message on the BBC that the islands had been declared "open towns". Later in the day the BBC reported the German bombing of the Channel Islands. on June 30th the deaths of the islanders killed in Jersey were reported at an inquest and recorded in the Viscount's (the senior law officer) Inquest Book, which is now part of the Jersey Archive.

The islands would be occupied until May 9th 1945 and it was in the run-up to the 75th anniversary of that Liberation (Liberation75), while working at BBC Radio Jersey. that I recorded a fascinating project which would run for a whole year right though to May 9th 2020 and beyond.

I worked in partnership with the Jersey Archive, part of Jersey Heritage, with the experts there selecting 50 objects from the collections in the Archives and the Jersey Museum through which we told the story of the Occupation and Liberation of Jersey. The series ran from May 2019 through to June 2020 and we produced 50 short features each one focussing on one object from the collections that tell us a specific story about that part of our history.

The features ran every Friday morning just after 0830 on the BBC Radio Jersey Breakfast Show. We ran the first on Liberation Day (May 9th) in 2019 and then we picked up the series on June 21st and ran a feature every day until Libertion75 and beyond.

Object Number 3 in the series happened to land on Friday June 28th 2019 ... exactly 79 years on from the bombing raids on Guernsey and Jersey which heralded the start of Occupation.

And so it was on that morning we heard from Linda Romeril, the Head of Archives and Collections at Jersey Heritage,  who brought out the object which tells that story ... that Inquest Book.

50 Objects - No.3 from Jersey Heritage Vimeo on Vimeo.

I loved doing this series and I learnt so much. Each of the features is on the BBC Radio Jersey website under 'Breakfast' or various presenters, but Jersey Heritage/Archive also placed each feature on Vimeo - the whole series is there!

Posted by Cathy Le Feuvre at 08:00 AM in broadcasting, Daily Thoughts, heritage, History, On This Day, One Day at a Time, radio | Permalink | Comments (0)