A Night in June

I love a bit of poetry.

And today I want to share another poem from one of my favourite poets, William Wordsworth.

He was an English Romantic poet who, with Samuel Taylor Coleridge, helped to create the Romantic Age in English literature - in 1798 they worked together on a collection of poems entitled Lyrical Ballads which was really the start of it all.

Wordsworth, in my opinion, wrote some beautiful poems which really give us a picture of the English countryside and the culture of his age.

He's well known for some particular poems and within them are some phrases which have become part of English-speaking culture.

I've already posted one of my favourites - 'I wandered lonely as a cloud' ... which gives us eternal images of those lovely spring 'Daffodils'.

What about 'Composed upon Westminster Bridge, Sept. 3, 1802' - which includes the beautiful line "Earth has not anything to show more fair"? One of the things I love about Wordsworth is that he didn't try to come up with fancy titles for his poems but sometimes just told us where he had written them!

I can't talk about Wordsworth without mentioning one of his very early poems - 'Lines Written a Few Miles above Tintern Abbey' - that was included in the 'Lyrical Ballards'  and if you've never read it, it's well worth a look .. why not do so here ?

However, the poet is so much more than this handful of 'famous' poems. Wordsworth was Poet Laureate from 1843 until his death on 23 April 1850 and so even until the end of his life he was writing pieces to celebrate landmark moments in British history.

But what I love about William Wordsworth is his imagery, and how he manages to write so beautifully about the things he sees and hears around him.

And so, as we're just into the month of June, let me share this rather less well-known Wordsworth poem ... perfect for this time of year! And beautiful! 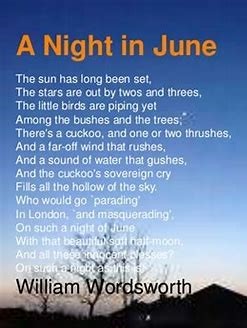 Posted by Cathy Le Feuvre at 08:00 AM in culture, Daily Thoughts, heritage, inspiration, Literature, One Day at a Time, poetry, Writing | Permalink | Comments (0)