Today I'm thinking about a word ...

And yes, if you know your music you'll know it's also the title of a song by the wonderful American R&B and soul singer Aretha Franklin.

In fact it was on this day - June 3rd in 1967 - that 'Respect' reached Number 1 in the Billboard Pop Singles charts. 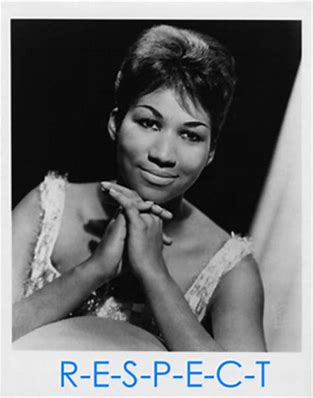 "Respect" was originally written and released by the American singer-songwriter Otis Redding in 1965 but as I said before, it was two years later that it was a hit for Aretha Franklin.

I'm intrigued that in each version the stories are slightly different. Redding speaks from a man's perspective, obviously, who will give the woman in his life everything she wants, so long as he gets his due respect when he brings home the money.

In Aretha Franklin's take on the theme, she is shouting from the rooftops that she's a confident and strong woman who demands the 'respect' of the man in her life, including physical attention.

In 2002, Aretha's version of the song received more honour when the Library of Congress added it to the National Recording Registry. In addition, it was placed at number five on Rolling Stone magazine's list of "The 500 Greatest Songs of All Time". And it was also included in the list of "Songs of the Century", by the Recording Industry Association of America and the National Endowment for the Arts.

Wow! What a song!

But it's also a challenging word, that word 'Respect'.

Taking aside the interpretation in the song, I think it's a very important word.

'Respect' can mean different things. It can mean deep appreciation and admiration of someone else or something else.  I think we can all understand that. There are things we 'respect' because we recognise their value to us and the world.

But 'respect' can also be defined as having meaningful regard for the wishes, rights and feelings of other people. Being thoughtful, considerate, polite, civil, attentive, courteous.

Some people might say that 'respect' is something that could do with being revived in our modern day culture and I think I might agree with that.

When I see people being vile on social media, I understand that they don't have a concept of 'respecting' others, and other people's opinions. They think THEIR opinions are more important and the feelings and rights of others are irrelevant, or even to be mocked and 'disrespected'. People don't respect or consider that others might think differently, believe different things.

When I read about people vandalising property for no particular reason than just to make a mess and disrupt the lives of others, I think that if they 'respected' other people's space and belongings and lives, they would not be inclined to behave in such a manner.

When I see the way people leave litter about, and 'fly tip' all their rubbish and pollute the oceans and the natural environment with plastics and other trash, it's a sign that they don't 'respect' our environment. They're not considerate of the world around them and how their actions impact not just on others, but on the natural world. And that's sad.

So today I'm thinking about how we can create more 'respect'. Of course there's that's old adage that we need to 'earn respect' and that's important. But we also need to 'learn' respect ... we need sometimes to put our own needs and wishes and wants aside and consider others. We need to stop thinking that WE are the centre of the universe and that no one else matters and learn that other people are worthy of respect. And even if we don't agree with them, we need to understand they have a right to their opinions and lifestyles. If we disagree with someone, we need to do that with 'respect'.

It's hard. But I think if we all have a bit more respect for others, and for our environment, the world would be a much better place.

Posted by Cathy Le Feuvre at 08:00 AM in culture, Daily Thoughts, environment, Music, On This Day, One Day at a Time, rock and roll / pop music, social media, song | Permalink | Comments (0)