Cathy Home Page Archives Profile
May God give you .....
You Affect the World

No Cure for Curiosity

Have you ever heard this quote?

It's one of those sayings that lots of us may know ... but do you know where it came from, who wrote it?

Well that was a woman called Dorothy Parker, an American writer, poet, writer, satirist and critic who is best known for her wit and sharp and droll comments and jokes. She was based in New York and it was her observations on life in the city and the people around her that gave her much of her material.

She wrote extensively for magazines - she sold her first poem to the prestigious Vanity Fair magazine in 1914 at the age of just 21 and a few months later she was hired as an editorial assistant for Vogue.  Within a couple of years she was a Vanity Fair staff writer and began writing theatre reviews. Actually she first filled in for P. G. Wodehouse, who was on holiday.

She mixed in literary circles including as part of a lunch group called the Algonquin Round Table named for the hotel in which they met which included among others editors and newspaper columnists. Some of those companions began quoting some of humorous things that Dorothy can up with during lunch, and her reputation as a 'wit' grew.

Later in life Dorothy wrote that those gatherings were actually rather superficial, lots of people telling jokes and '...telling each other how good they were. Just a bunch of loudmouths showing off ... There was no truth in anything they said...' Plus ca change, as they say.  Interesting!

Dorothy wrote extensively and if you look online you'll see many of her funny and rather sarcastic comments online, many of which of course are taken out of context. I'm guessing from what I've read of her she was a great people-watcher, someone who mental notes about everything around her.  Imagine being at a party with Dorothy Parker. I for one would try to be on MY best behaviour.

There's a website dedicated to her - the Dorothy Parker Society - if you want to find out more. And one of the things I've learned as I've investigated her a bit more is that she thoroughly disliked her reputation as a 'wise cracker',  and of course there was much more to her than those sharp-witted quotes.

I'm mentioning her today because it was on this day - June 7th - in 1967 that Dorothy Parker died and also because there's one of her comments which I absolutely LOVE. I don't know the context in which she said it or wrote it but for me it is profound. 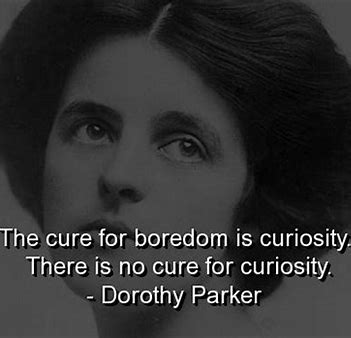 Don't you love that?

I have to admit I am the curious kind. I also love to 'people watch' and actually I also store up things I see and hear, sometimes even writing them down.

I will never be a Dorothy Parker, but occasionally these vignettes of life make their way into my writing and there's more still to come yet.

One example. When I worked in London I spent many hours on the train commuting into the office and it would have been very easy to get 'bored'. Sometimes I read to pass the time, but other times I just watched and listened.

How, I wondered, did that man sitting opposite me get to have SUCH a big nose? Was he born like that, or was he in some sort of accident? It was massive, red and bulbous. And the best thing was he seemed completely unaware of it. Classic.

There were the silly women chatting about shoes and clothes, the girls applying their makeup as we moved along, unaware that at any moment they might pierce their eyeball with mascara stick. There were the men talking endlessly about sport and even those sharing family and work stories and gossip, sometimes with a degree of 'cattiness', sarcasm and petty spite.

Yes often I'm sure 'showing off'' and maybe just trying to impress the listeners around them.

Dorothy Parker would have loved it!

Posted by Cathy Le Feuvre at 08:00 AM in Biography, Daily Thoughts, inspiration, Literature, On This Day, One Day at a Time, poetry, quotes, Writing | Permalink | Comments (0)