On the eve of Liberation Day in the Channel Islands I'm continuing to dip into a radio series I recorded in 2019/2020 to commemorate the 75th anniversary of this momentous historic day last year.

It was a brilliant experience for me, as I worked closely with the experts at Jersey Heritage who selected 50 Objects from the collections at the Jersey Archive and the Jersey Museum through which we told the story of the Occupation and Liberation of Jersey.

Objects selected told us so much about living life under German Nazi occupation. How the population kept food on the table, made do and mended, resisted the enemy, lived day to day life. We heard how life was for German soldiers based in Jersey, and how islanders entertained themselves and there were documents that showed the plight of islanders' health and food supplies, and official documents showing how the German forces kept control over the islanders - registration cards, posters warning against sedition.

If you read this blog yesterday, you'll know that we heard the tales of slave workers brought to the island as forced labour on numerous fortifications which Hitler ordered to ensure the British and their Allies were unable to win back the islands, if they had invaded. There were stories about people who were sent off the island to work and internment camps, some of whom never returned. And we learned about the lives of groups like Jewish people who lived in fear throughout the occupation.

I learned so much about that period of Jersey's history including some of the 'big events' during the era starting with the German bombing raids on June 28th 1940 which killed islanders just before the enemy invaded the island on July 1st that year.  Jumping forward more than four and half years we re-lived the arrival of the Red Cross ship 'Vega' with vital food parcels and supplies for an island that had been cut off from the rest of the world since D-Day in June 1944. By the end of that final year of the war, Jersey and the rest of the Channel Islands were in a desperate situation and the Red Cross parcels really were a life-saver.

Our 50 Objects included official letters and private documents and even diaries and, for this penultimate 'dip' into my series, which ran weekly on BBC Radio Jersey for a whole year in the run up to and as part of our contribution to Liberation75 on May 9th 2020, I'm turning to a diary. 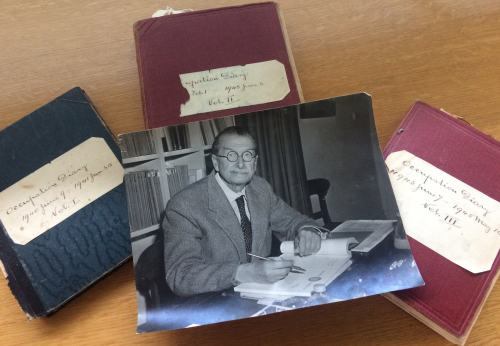 And not just any ordinary diary. This was the personal journal written across the Occupation by one Ralph Mollet, who was the Bailiff's secretary during the period.

The Bailiff in both Jersey and Guernsey is the chief justice and also the president of the legislature or States Assembly of elected representatives. The role goes back to the 13th century, Bailiffs are appointed by the British monarch and they undertake official and ceremonial duties.

Before the invasion by the German Nazi forces in July 1940 there would also have been a Lieutenant-Governor in both jurisdictions, but as the official representative of the British monarch it was thought best for them to leave the islands before occupation. So the Bailiff role became even more important. He was the main point of civilian contact for the German Commandant and the occupying authorities. The Bailiff also represented the interests of islanders to those authorities and got involved in diplomacy and negotiation, pleading causes, including the supply of food and medicines. In fact, it was the Bailiff of Jersey who intervened in winter of 1944 and eventually managed to persuade the Nazi German forces of the need for the Red Cross to sail into Jersey on Dec 31st of that year with those vital supplies.

From 1935 to 1961 the post of Bailiff in Jersey was held by Alexander (later Lord) Coutanche, and working alongside him was Ralph Mollet, attending many of those official meetings and engagements. Throughout the 1940-45 period Mr Mollet kept journals and they really are a window on his world, as he stood on the sidelines of history.

50 Objects - No47 from Jersey Heritage Vimeo on Vimeo.

Ralph Mollet also documented his experiences just after occupation in Jersey Under The Swastika.  But his original diaries are held in the Jersey Archive. They are a phenomenal documentation of the era and an important and fascinating record of the time that Ralph and his fellow islanders spent under enemy occupation.

If you want to listen to the feature on the Ralph Mollet diaries via the BBC Radio Jersey website please click on the link below.