Cathy Home Page Archives Profile
Grow your Own
You Can Do It!

The Angel of Prisons

Are you someone who makes lists of 'Things to Do'?

And do you ever actually ever tick off all the points on the list before more are added?

No sooner have you got through all the things you need to do in a particular timescale then something else crops up and you're back to Square One with MORE needing to be done.

I came across a quote which I've been saving for a relevant day to share with you.

And today is THE day! 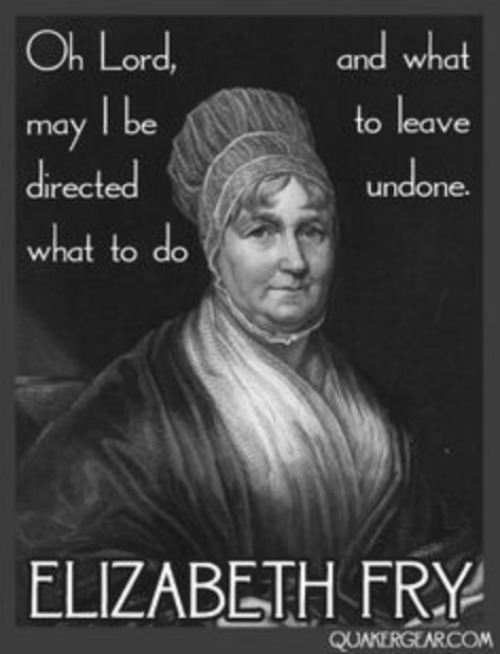 It's a wise thought from a very wise woman - Elizabeth Fry.

'Oh Lord, may I be directed what to do and what to leave undone'.

I think it's a good mantra to live by, because sometimes we just have to accept that we will NEVER get everything done in the time we set ourselves.

But we do need to prioritise what we do. Sometimes when we make our list we may (even subconsciously) put at the top the things we know will be easy to achieve. So if we start from the top of our list and work downwards, we MAY get some challenges completed, but some of the BIG issues we need to address may never be achieved.

So perhaps a little guidance, even if not from Almighty God, might be helpful.

I don't know the context of this quote but I do know a bit about the author and I'm guessing not just from this prayer, but also because of what she's famous for, she was a woman with a rather long daily 'To Do List'.

Elizabeth Fry is best known for being a social and prison reformer - and she was born on this day (May 21st) in the year 1780 in the city of Norwich in the county of Norfolk in East Anglia in England.

She was a Christian philanthropist and a Quaker, a member of the Religious Society of Friends - sometimes also known simply as 'Friends' - who among other things believe that there is something of God in everybody and that each human being is of unique worth.

Valuing all people equally and opposing anything that may harm or threaten them is part of the Quaker 'theology' and from the beginnings of the Quaker movement in the mid 17th century, 'Friends' got involved in many social movements and philanthropy.  Quakers were among some of the first settlers in the USA where they got involved, among other things, in the abolition of slavery. Across the world they were involved in social justice projects, including prison reform.

In addition, as many started as craftspeople and artisans, they also grew businesses which not only made profit but improved the lot of the workers and their families. This was particularly significant because as the movement matured it coincided with the Industrial Revolution, which saw huge growth in manufacturing and industry, not all of which was beneficial to those who made it possible and put in the hard graft.

Some of the well known business and brands we know today have Quaker roots -  banks and financial institutions like  Barclays, Lloyds, and Friends Provident and chocolate and confectionery brands like Cadbury, Rowntree and Fry.

Which brings me back to Elizabeth Fry. The Fry family was a big Quaker clan whose influence was felt far and wide and not just in busines..

Looking into her life I discover that she was from a leading Norwich family. Her father, John Gurney, was a partner in Gurney's Bank, which would one day merge with Barclays. Elizabeth's mother, Catherine, was a member of the Barclay family who were among the founders of Barclays Bank.

Aged 20, Elizabeth married Joseph Fry, who was also in the banking business, and they moved to London. Within a year of marriage the first child arrived - between 1801 and 1822 she produced eleven (yes you heard right) children but Elizabeth was not just a 'stay at home Mom'.

She was a recorded as a minister of the Religious Society of Friends in 1811 - remember this was at a time when women preachers were VERY VERY rare and the concept of women in Christian ministry was radical. Just two years later she was invited to visit Newgate Prison where she encountered deplorable conditions. Particularly horrifying for Elizabeth were the conditions in the women's section of the jail, which was was overcrowded with women and children.

Long story short, she set her mind and heart to reforming the prison system in Great Britain and as a result has earned the reputation as the "angel of prisons". From setting up a school for prisoners' children to campaigning for the rights of those transported to far off lands like Australia, sometimes for what we would now call quite petty crimes, Elizabeth was a woman on a mission. Her work helped to start a movement for the abolition of transportation.

Elizabeth Fry promoted the idea of rehabilitation instead of harsh punishment and encouraged the learning of skills while people, especially women, were incarcerated so that they could support themselves and their families when they were released. She was a major force behind new legislation to make the treatment of prisoners more humane, and she received support from the highest authority in the land, being granted meetings with and support from a young Queen Victoria.

Her humanitarian work extended to helping homeless people and even after her death in 1845 her reputation inspired many social reformers. From 2001 to 2016, Elizabeth Fry was depicted on the reverse of £5 notes issued by the Bank of England, where she was shown reading to prisoners at Newgate Prison.

So although we may not know much about her and her life, many of us will have carried her in our purses and pockets for years.

And today, as we remember Elizabeth Fry and all the things she managed to do in her relatively short life, I for one am pleased she prioritised what she did. There may have been times when, with her many family commitments, visiting prisoners and challenging some of the conventions of the day might not have been on the top of her 'to do' list, but thank goodness she somehow received the inspiration she needed to achieve all that she had to do. For without that, the world could have a very different place especially for those without a voice at a time when the world was changing so rapidly.