Today is my brother's birthday!

So straight up I want to say 'Happy Birthday Steve!' ... the sun is out (at last) and life is good!

However, what I didn't realise was that Steve shares a birthday with someone who features in my kitchen! Or at least something he said is on a magnet which sticks to the side of my microwave!

And this is what is inscribed on that magnet...

I love that thought, and it inspires me every time I see it because it reminds me that although I might be scared of the future, I can still hope. You'll note this is not just about 'dreams' but hopes, which for me are a bit more 'solid' because hope is, in my opinion, a little bit more 'active' than dreaming.

I can dream about things and that's important because it may stretch my imagination as to what MIGHT be possible. However, in reality that may be just out of reach. But when I begin to HOPE for something rather than just thinking about it, I may do something a little more proactive to make it happen rather than just dreaming.

The man who said this certainly had hopes ... for himself and his family I'm sure, but also for his nation.

Because he was John F Kennedy, the 35th president of the United States of America, who was born on this day in 1917.

Sadly, we know that his time in the presidency was brutally cut short when he was assassinated in November 1963. He was only 46 when he died and it's always poignant to imagine what else he might have achieved had he not been cut down in his prime.

But still, he has gone down in history as an inspirational figure, for all sorts of reasons, although he probably never thought his thoughts would end up on a magnet on the side of a microwave in the Channel Islands!

But they did and I hope today this JFK thought inspires you too! 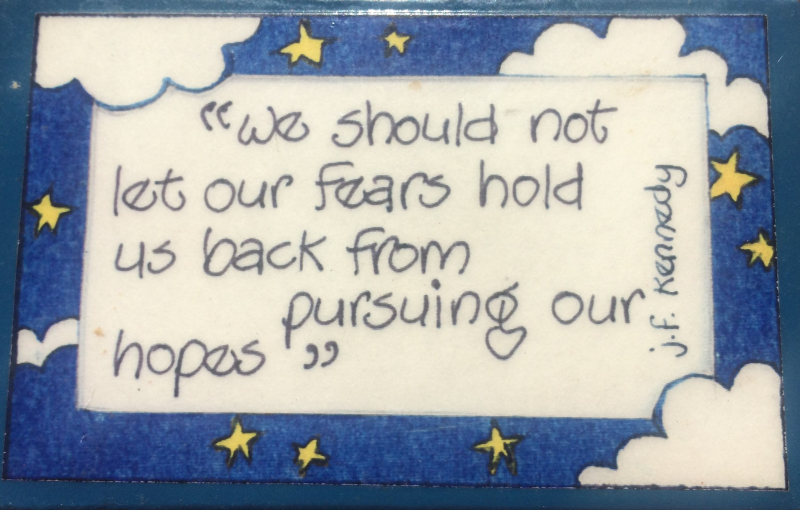