Are you a sucker for old movies?

And I especially love the old Hollywood musicals! There was a time when you couldn't avoid them on the weekends on British TV. There were and still are my guilty pleasure.

The films were usually 'feel good' tales of love over adversity - boy meets girl, falls in love, something happens to come between them, then it all gets worked out and the love is back on - and usually packed full of great songs.

It was through the old movies on TV that I first heard the name Irving Berlin, the American composer, lyricist and songwriter who was born on this day in 1888. He's actually considered one of the greatest songwriters in American history and it's reckoned he penned around 1,500 songs, including many that have passed into musical folklore.

If you fancy being impressed, just check out the list of some of his songs here and you'll see they include classics like White Christmas , There's No Business Like Show Business, and even the song that has become an American anthem - God Bless America.

Born in Imperial Russia, Berlin arrived in the United States of America at the age of five. He was by all accounts a bit of a youthful musical prodigy. He was paid for his first song, Marie from Sunny Italy, in 1907 - he received 33 cents for the publishing rights. By 1911 he has his first major international hit, Alexander's Ragtime Band'.

Berlin's career spanned 60 years during which he wrote not just the songs, but the scores for 20 original Broadway shows and 15 original Hollywood films - hence my cosy weekend TV viewing. Berlin songs were nominated eight times for Academy Awards.

Songs written by Irving Berlin have reached the top of the charts 25 times and proved popular not just to the musicians of his own time and those for whom he wrote some of the songs but loads and loads of other musicians and singers down the years who have recognised the beauty of his lyrics and tunes. 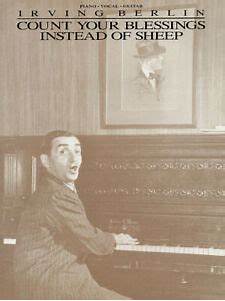 But to celebrate Irving Berlin's birthday today I'm going to turn to a little song of his that has always touched my heart.

It was included in the 1954 movie 'White Christmas', perhaps the most iconic Christmas movie of all time in my opinion.

It's sung by two of the main characters in the film played by Bing Crosby and Rosemary Clooney, both of whom also recorded and had hits with other Berlin songs.

Blink and you may this one ... it appears to be just a simple tune with simple lyrics, but it's lovely...

It reminds us to remember how much we are blessed rather than fretting about any short-term problems that we might be facing.

It's a great message for us all - Count Your Blessings ...

As I was researching this thought today I discovered (from Wikipedia!) that this song actually arose from Irving Berlin's personal experience. He apparently was suffering from insomnia brought on by stress and his doctor suggested he try "counting his blessings" as a way to deal with it. I can certainly sympathise with the great songwriter on this one ... insomnia is something that I'm plagued with!

And although it appears to be just a little song, Count Your Blessings was nominated for an Oscar in the "Best Song" category at the Academy Awards, only to be pipped at the post by Three Coins in the Fountain from the movie of the same name ... another iconic film!

But maybe I'll come to that another day. Who knows?

Posted by Cathy Le Feuvre at 08:00 AM in Arts, culture, Daily Thoughts, Film, movies, Music, On This Day, One Day at a Time, song, television | Permalink | Comments (0)