Those of you who live in the UK and who are maybe of a 'certain age' will be aware that for many decades in the previous (20th) century the comedy scene was dominated by some brilliant 'duos' and probably the most successful double act was a certain 'Morecambe and Wise'.

The Morecambe & Wise Show and especially their Christmas 'specials' became a national institution and for many years dominated the Christmas Day BBC television schedule, watched by many millions. The 1977 Christmas episode was apparently watched by over 28 million people!  Their shows, featuring the two of them, gags, comedy sketches and songs were such a hit that big stars of the screen and stage were lining up to be included in an episode, even if it meant having the 'mickey' taken out of them. 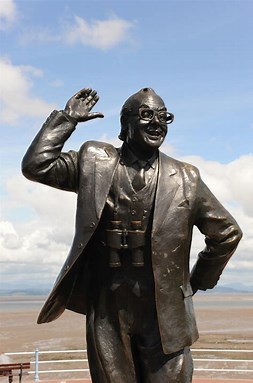 I'm thinking about them today because it was on this day - May 14th - in 1926 that comedian John Eric Bartholomew, OBE was born. He WAS Eric Morecambe - he took his stage name from his home town, the seaside resort of Morecambe in the county of Lancashire in North West England. There's a statue of him in the town overlooking Morecambe Bay, a bronze sculpture which was unveiled by non other than the Queen of England in summer 1999!

Eric had started performing in talent shows at an early age and when he met up with another young performer, Ernie Wise, they became close friends and, eventually, comedy partners.

After the Second World War, they served their apprenticeship in shows and on stage across the British Isles and on radio, before eventually coming to the notice of television producers and finally securing a contract with the BBC to make a television show. It was the start of an astonishing broadcasting career.

The comedy duo worked together from 1941 until Eric's death from a heart attack on May 28th, 1984. In 2002 he was named one of the 100 Greatest Britons in a BBC poll, securing his place as one of the most prominent comedians in British popular culture. 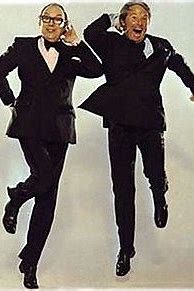 Eric and Ernie brought so much pleasure to so many people - myself included!

And so, to celebrate all the laughs and joy they brought into my life and the lives of so many others, today I want to share with you the iconic song they adopted as their signature tune and with which they usually ended their show, often accompanied by a silly dance.

I love it! It's so optimistic!

I defy anyone not to have their spirits lifted when they hear and watch  ... 'Bring me Sunshine' ...