This week, in the run up to the celebration of Liberation Day in the Channel Islands I'm dipping into a fascinating series I recorded for radio which ran across 2019 into 2020 and told the story of the Occupation and Liberation of Jersey through 50 Objects held in the Jersey Heritage collections.

The series culminated around May 9th 2020 when we marked the 75th anniversary of the Liberation ... it was part of BBC Radio Jersey's contribution to Liberation75.

Yesterday I explained that on July1st 1940 Jersey and the other Channel Islands including Guernsey, Alderney and Sark were invaded by the German Nazi forces - Hitler thought it would be the next step to invading Great Britain.

The invasion came at the end of a turbulent few weeks when, by June 20th,  any remaining British forces were withdrawn from the islands, so leaving an 'open door' for the enemy to invade.

Some islanders, especially those with means and those with family members living in mainland Great Britain had already decided to leave but during those last weeks of freedom, as occupation became inevitable, many decided that they could not stay in their island home.

By June 21st it had become clear to the government of Guernsey that it would be impossible to evacuate everyone who wanted to leave, so priority was given to special categories in the time remaining. In total, 5,000 school children and 12,000 adults out of the resident population of 42,000 were evacuated - a third of the islanders left. In Jersey, 23,000 civilians registered to leave but consistently the government encouraged people to stay and in the end only 6,600 out of the 50,000 population left on evacuation ships ahead of the invasion and the start of the five year long Occupation. 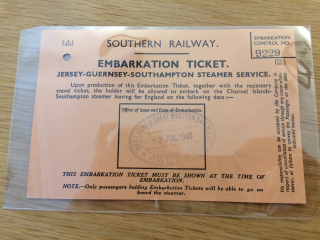 Each of the objects, from the collections at the Jersey Archive and Jersey Museum, were selected by the archivists and experts at the Archive. It was a real joy to work with them over the year and to learn so much about this crucial period of Jersey's history.

The most interesting thing is that many of the items selected to tell the story of the Occupation and Liberation appear on the surface completely inconsequential.

Linda Romeril, the Head of Archives and Collections at Jersey Heritage,  picks up the story of the Unused Ticket

50 Objects - No.5 from Jersey Heritage Vimeo on Vimeo.