All this week I'm turning back the hands of time more than 75 years to the days of Jersey's Occupation.

On Sunday (May 9th) the Channel Islands will celebrate 'Liberation Day' ... that May day in 1945 when five long years of occupation by the enemy finally ended.

If you've followed my blog especially this week, you'll know that the Channel Islands - Jersey, Guernsey, Alderney, Sark - were the only places in the British Isles to be invaded and occupied by enemy forces. Increasingly over the years, as we heard yesterday, food and other supplies began to run out, especially after D-Day in June 1944 when the British and their Allies invaded northern France and began the push back against the German enemy.

Although it was a turning point in the war, the Channel Islands were not taken back so that meant they became cut off. That affected not just the residents but also the German forces who were still stationed here.

It was on May 8th 1945 that the Germans finally surrendered and the Second World War came to an end, at least in Europe ... the day is known as Victory in Europe - VE Day  And the next day the Channel Islands was liberated, marking the end of a particularly traumatic period in history.

A year ago, across 2019 and 2020, while I was working for BBC Radio Jersey, I recorded a very special series in partnership with the experts at the Jersey Archive. They selected 50 Objects from the Jersey Heritage collections held at the Archive and the Jersey Museum which tell the story of the Occupation and Liberation years in Jersey. This was not just an interesting exercise for me, but also a great way to help the island celebrate 'Liberation75' in May 2020.

If you listened to the audio yesterday you'll have heard a bit about the way islanders managed to keep their food cupboards stocked through desperate times. It's just one of the objects in the '50 Objects' series which tell the story of the resilience of the population, making do and mending, coping under intense pressure. 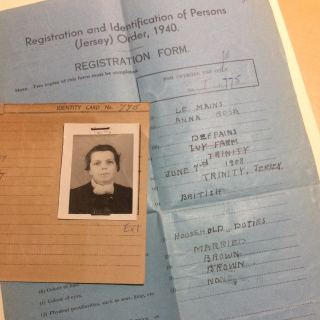 The series also included stories of slave workers, transport, children, those who resisted the occupying forces and official and personal letters, diaries and documents.

Between July 1940, when the Occupation began, and May 9th 1945 - the original Liberation Day - the German occupying forces had to find a way of keeping track of and controlling the island population, and so they implemented a Registration Card system. All adults had to be registered, carry their card and produce it on demand. Not to do so had dire consequences.

But as we discovered when we looked at 'Object 27' in the 50 Objects series, although they had to comply, some islanders managed to use their registration card as a form of passive resistance.

And when Senior Archivist at the Jersey Archive, Stuart Nicolle, picked out a registration card for us to look at, it was personal...

50 Objects - No27 from Jersey Heritage Vimeo on Vimeo.

If you want to listen to the feature on the BBC Radio Jersey website please click on the link below. The features were broadcast every week on a Friday morning on the Breakfast Show just after 0830, with repeats.