On Sunday (May 9th) here in the Channel Islands  we will celebrate 'Liberation Day'.

It's the day back in 1945 when the islands were liberated after five years of enemy Occupation.

If you know your history, you'll be aware that between 1939 and 1945 the world was at war with the 'Axis' powers headed by Nazi Germany.

By summer 1940 Germany had managed to take large parts of mainland Europe including France, and just a hop across the water Hitler had the Channel Islands in his sights. On July 1st 1940, with no resistance from British forces because the islands had been 'demilitarised', German troops landed in the islands and so began five years of occupation. The islands were the only part of Great Britain to be occupied by enemy forces during the Second World War.

The Occupation of the Channel Islands meant islanders were largely separated from the rest of the world, and certainly England and Great Britain. Under Nazi occupation, islanders were forced to conform, although not all did. Some, including those who resisted the enemy, were sent to internment and work camps in Europe never to return.

Life was never easy for the islanders but when the Allies re-took France in June 1944 in what has become known as 'D-Day' - landing just across the water from the Channel Islands in Normandy - Jersey and the other islands, and the remaining German troops, were cut off from the main German army and supply routes.

The final year of Occupation, especially, was dire. But even before food and medical and other supplies became sparse after the connections with the French mainland were cut, islanders had experienced years of rationing and restrictions. 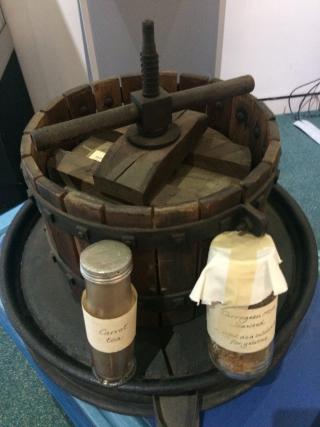 All this week in my blog I'm dipping into a series I recorded for BBC Radio Jersey and Jersey Heritage. I started recording in spring of 2019 and we ran a feature every week from May/June 2019 right through to and beyond May 9th 2020 when we celebrated Liberation75.  Our focus was 50 Objects held in the collections at the Jersey Archive and the Jersey Museum which tell the story of the Occupation and Liberation of Jersey.

There were documents, official and personal, posters warning people against opposition, toys created for children out of nothingness, tales of how the population entertained themselves, stories of bravery and of day-to-day survival and ingenuity as people made use of anything they could lay their hands on to just keep themselves fed.

And so we come to today's 'object' ... just one of the stories we heard about how islanders found ingenious ways of feeding themselves and their families.

The story is told by Val Nelson, Senior Registrar at Jersey Heritage ...

50 Objects - No.15 from Jersey Heritage Vimeo on Vimeo.