All this week I'm looking ahead to Liberation Day in the Channel Islands with a dip into a radio series I made in the past couple of years which tells the story of the Occupation and Liberation of Jersey.

It was in early 2019 that I met with the archivists and experts at the Jersey Archive and explained that I had this idea for a series which would take objects from their collections through which we could tell the story of that period of our island's history.

I have to admit it wasn't entirely an 'original' idea, but fortunately the guys at the Archive were aware of another series which was on BBC Radio 4 some years ago - 'A History of the World in 100 Objects' made in partnership with the British Museum - so they knew exactly what I was after.

The Archive experts selected 50 Objects from the Jersey Heritage collections held in the Jersey Archive and the Jersey Museum, and then we recorded in batches across more than a year. The features ran every Friday morning on the BBC Radio Jersey Breakfast Show starting on May 9th 2019 and then picking up at the end of June and running right through to and beyond the celebration of the 75th anniversary of the Liberation on May 9th 2020.

Liberation75 could not be publicly celebrated because of the Covid19 pandemic and lockdown restrictions which were in place at the time, but I'm pleased to say our '50 Objects' series was included in the 'official' commemorations.

Although I know a lot about the Occupation, recording the series taught me so much more and one of the subjects we featured was heart-breaking and also served to uncover the brutality of life for many under the Nazis.

When you visit Jersey, and indeed the rest of the Channel Islands, you will notice that there are lots of concrete structures which were built during the Occupation in the years 1940 to 1945.

If you've been reading this blog over the past few days you'll be aware that the German Nazi forces invaded and occupied the islands on July 1st 1940. Hitler was cock-a-hoop that he had invaded a part of the British Isles and in fact, he saw it as a first step into the invasion of mainland Britain.

That didn't happen, the British fought hard against it, including during the period known as the Battle of Britain  (this included the German night time bombing raids which became known as The Blitz) from July 1940 to June 1941.

But as the tide of war turned against them, the Nazis were determined that the Channel Islands would not be taken back so they set about building fortifications - look out points, gun emplacements, tunnels and bunkers where German soldiers could defend the islands against British and Allied invasion.

What many people might not know is that the Germans didn't build those concrete defences and walls and bunkers themselves, rather they were largely built by forced labour and what we now recognise as 'slaves'. This was part of what the Germans called 'The Atlantic Wall', and in the Channel Islands it resulted in the construction of fortifications, roads and more between 1940 and 1945. This was overseen by the Organisation Todt. which was a civil and military engineering organisation in Nazi Germany that operated between 1933 to 1945. It was named after its founder, Fritz Todt, who was an engineer and a senior Nazi. 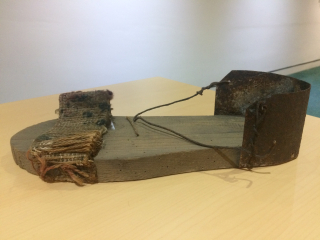 Organisation Todt was actually responsible for a huge range of engineering projects both in Nazi Germany and in their occupied territories during World War II - from France to the Soviet Union and, of course, in the Channel Islands.

Although some people were 'employed' to work on the projects, Organisation Todt increasingly used forced labour and, especially from 1943 until 1945 as the Third Reich came under pressure, this effectively meant that slaves were brought in to construct their defences. In the Channel Islands this included many hundreds of prisoners of Russian, Polish and other European heritage for whom life was just appalling.

And so to today's 'object' from the 50 Objects series. A few of the objects we looked at highlighted the plight and lives of those poor men who were brought to the islands to work on the fortifications, who were often treated brutally, with little food and shelter, no clothes and dreadful working conditions. Some were worked to their death.

When Val Nelson, Senior Registrar at Jersey Heritage, pulled out today's object ... it made my skin crawl and my heart break...

50 Objects - No23 from Jersey Heritage Vimeo on Vimeo.

This was Object Number 23 and if you want to listen to Val talking about a couple of other objects which document the lives of the Operation Todt slave workers in Jersey you can also listen to Object 21 - a Russian Toy and Object 22 - Bill's cap.

If you want to listen to today's clip on the BBC Radio Jersey website click on the link below.