Cathy Home Page Archives Profile
A Prayer for Our World
The Best is Yet to Come!

On Good Friday, as Christians we are remembering how Jesus Christ was crucified on a hill outside of the city of Jerusalem.

It's perhaps the holiest day of the year for Christians, and some people might think that it's strange to call a solemn holy day that commemorates a death a 'good day'. 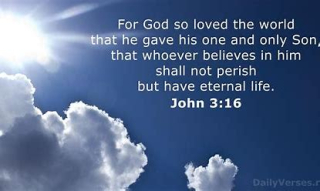 Lots of deep theological and historical and cultural reasons for that, but for me the 'good' is there because actually it comes a few days before the main revelation of Christianity. Which is  ... that Jesus didn't stay dead!

Yes he died, but then he pushed through death, proving that it didn't have to be the end of existence.

By coming back to life he 'conquered' death which means that if we believe in Jesus we also ultimately can push back death. Dying doesn't have to be the end of it all for us. We can be God's person here on earth,  but we may also live eternally in the spirit world after we have shrugged off this mortal coil

It's an astonishing thing! Difficult to comprehend, supernatural, but when embraced, an outrageous concept of optimism and hope.

Christians believe that although Jesus lived as a man for about 33 years, including 30 as a member of a family, a working man, followed by three years as an itinerant preacher, teacher and miracle worker and healer in the place we now know as The Holy Land (modern day Israel) ... he actually was more than a man. He was the Son of God, or God himself in human form.

We Christians do believe that Jesus was the best example of a human being that ever existed and we are encouraged to emulate his compassion, love and life of service. We also believe that his death (and ultimate resurrection on the day we call 'Easter Sunday') not only shows his divinity, but also paves the way for us to embrace eternal life ... if we would only believe in Jesus and follow him.

If you've been reading my blog a bit this week you might have picked up that by the time he reached Jerusalem in the final days of his life - the time we call 'Holy Week' in the church - the religious leaders of the day were determined to get rid of Jesus.

There were rumours that people believed that Jesus - the poor itinerant preacher - was actually the Messiah. This was the person that ancient scripture said would be sent by God to save the people of Israel. Not to mention those claims that Jesus could actually be God in human form, or the Son of God. For the Jewish religious leaders this was blasphemy and Jesus' popularity threatened their control over the population.

Ultimately they wanted rid of him. And by the day we call 'Good Friday' they had had him tried before the local and the Roman authorities and he found himself being beaten, a crown of thorns rammed onto his head (an ironic reference to the fact that some saw him as a 'King') and he had to carry his own cross through the streets of Jerusalem, through the crowds, being mocked and taunted and laughed at!

The story of Jesus' final hours and his death on that cross at a place called Calvary outside the Jerusalem city walls is documented in the New Testament of the Bible, including in the book of Matthew and Chapters 26 and 27 ,  if you have time to do so, please do read that account today.

It was a horrible death, bloody and brutal, designed not just to punish the person being nailed to a cross of wood and left to hang until they died, but also to warn those watching that THIS is what was in store for them if they, too, dared to defy authority.

There are many songs associated with this day, some very traditional. But this one and this particular version by the Gaither Vocal Band, always stirs my heart as on Good Friday I once again think about what Jesus did two thousand years ago, and what he's still doing for me today.

No pictures on this video. Maybe just close your eyes and listen to the words.

*this song now on my You Tube channel