Have you ever wondered what might have happened if you had made different decisions in life?

Taken that 'other' first job rather than the one you actually began your working life with? Could that have led to an entirely different career?

Taken a risk and moved to another town or even country when you had the opportunity, even though it seemed like a ridiculous notion at the time? Might that have meant more adventure?

Carried on a relationship which you gave up with little fight because you had convinced yourself, at the time, that the person concerned wasn't 'for you', or that it wouldn't work?

I have to say it has crossed my mind once in a while that life could have been very different for me if I had done 'that' rather than 'this', made alternative decisions.

'The Road Less Travelled' is a saying which has entered our language which sums this up. What might have been had we made different choices?

The phrase comes from a great poem by Robert Frost  - a four time Pulitzer Prize winner - which is actually entitled "The Road Not Taken",

Whenever I read these lines, it certainly gets my mind whirling. 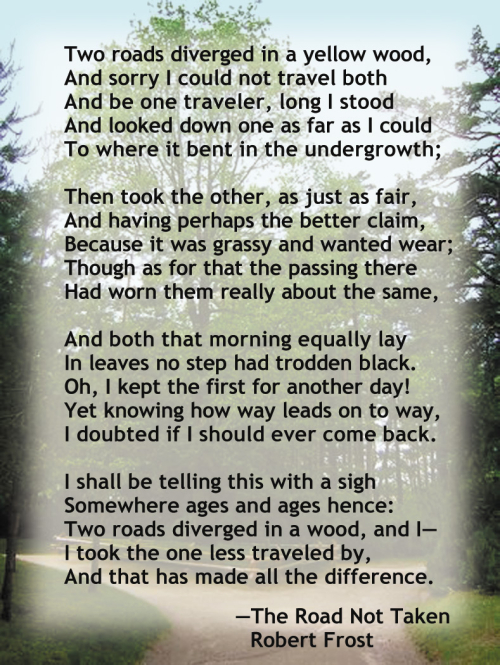 Posted by Cathy Le Feuvre at 08:00 AM in Arts, Daily Thoughts, inspiration, Life, One Day at a Time, philosophy, poetry, quotes | Permalink | Comments (0)