Are you into classical music?

Me neither really, although I do dip in from time to time and I am familiar with some of the more popular pieces.

But even if we're not dedicated classical musicians or avid listeners to the classics, there are some 'tunes' which are so popular most of us know them. And as for the names of what we now know as 'classical' composers ... well there are a few which roll off the tongue. Mozart, Johann Sebastian Bach,  Tchaikovsky,  Chopin, Haydn, Vivaldi, Debussy, Wagner - you know what I'm talking about.

And, of course, not forgetting .... Ludwig van Beethoven!

Beethoven is one of the most popular 'classical' musicians in history and regarded as one of the greatest classical composers ever!  Born in Germany in December 1770, he was taught music by his father from the tender age of 5. Apparently his Dad was keen to  make his son into a 'child prodigy', similar to the very successful Austrian composer and performer Mozart a couple of decades earlier. However Ludwig didn't attract much attention until he was an adolescent, but then emerged as a pretty special musician.

If we know nothing about Beethoven at all, most of us may be aware that he ended up almost completely deaf ... his hearing apparently began to deteriorate when he was in his late twenties and the final decade of his life before his death in March 1827 at just 56, was spent in almost complete silence.

He wasn't just a composer, but also a performer and conductor but he gave up performing and conducting in the year 1811 ... but even then despite his deafness, he managed to keep composing and in the final years of his life managed to produce some of his great masterpieces. He is now renowned as the most important musical figure in the 'transitional' period between what we now call the 'Classical' and the 'Romantic' eras in Western music! Of course, at the time musicians like Beethoven had no idea they were producing 'classical music'. For them it was just music, just what was in their soul.

And Beethoven must have had music in his whole body, and certainly in his head, to be able to conceive such incredible  music even when he could not hear what he was creating! What a talent! What an amazing person!

I'm talking about this today because it was on this day - April 27th - in 1810, that Beethoven produced one of his most enduring 'tunes'. And it IS a piece of music which many of us will know, even if we're not into 'classical music'. 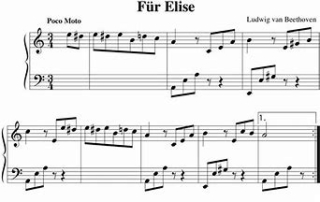 It's called Today writer Cathy Le Feuvre is enjoying a piece of classical music which was composed on this day in the year 1810, by a composer who managed to produce incredible music despite disability' and I have to admit it is one of my favourites! Remember, when he penned this 'tune' Beethovem was just a year off giving up the performing and conducting, so his hearing must have been really bad. And yet he managed to create this exquisite piece which has brought joy to so many people.

Interesting point though, 'Für Elise' wasn't even published in Ludwig's lifetime. It was actually discovered 40 years after his death by a fellow German, a music scholar and writer called Ludwig Nohl, and although historians and researchers have speculated down the centuries, it's still not clear

The music score for 'Für Elise' wasn't published until 1867 but Ludwig Nohl said that the original signature manuscript had the title "Für Elise am 27 April [1810] zur Erinnerung von L. v. Bthvn" ("For Elise on April 27 in memory by L. v. Bthvn"). The original score has been lost but it's become one of the most famous piano pieces of all time.

It's one of those compositions and tunes that a lot of people try to play, especially while learning and that's one of my dreams actually - to play this on the piano. I'll need to learn to play first though! Maybe one day.

But here for you today, on the day it was written all those years ago, is perhaps one of the most famous pianists of the modern era, the incredible  Chinese pianist Lang Lang ... with ... 'Für Elise'.

Posted by Cathy Le Feuvre at 08:00 AM in Arts, culture, Daily Thoughts, History, inspiration, Music, One Day at a Time | Permalink | Comments (0)