Today I'm thinking about Spring and that wonderfully cheerful flower - the daffodil.

Over the past few weeks Jersey has been festooned with the bright yellow trumpet shaped blooms  - in gardens, in fields and on hedgerows. It's been glorious!

I think daffodils have the ability to raise our spirits, make us smile and even get the creative juices flowing. 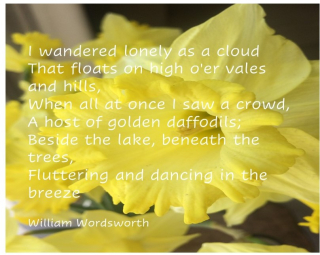 Back in April 1802 a poet called William Wordsworth was taking a walk with his sister Dorothy around Glencoyne Bay, Ullswater, in the Lake District, when they came across a "long belt" of daffodils. A couple of years later that memory led to the creation of one of the world's most popular poems ... called 'I Wandered Lonely as a Cloud' or 'Daffodils'.

Years ago I visited Wordsworth's Lake District home in Northwest England - Dove Cottage - and one day I might chat about that as well. It's a place I had always wanted to visit, ever since I read Wordsworth as a teenager, including this fantastic poem. In fact, his sister Dorothy also wrote about seeing the daffodils in all their glory in her Journals ... again another brilliant read, if ever you fancy it.

So today, to mark the birthday of William Wordsworth - born on this day April 7 1770 - I bring you his immortal lines...

I wandered lonely as a cloud
That floats on high o'er vales and hills,
When all at once I saw a crowd,
A host of golden daffodils;
Beside the lake, beneath the trees,
Fluttering and dancing in the breeze.

Continuous as the stars that shine
and twinkle on the Milky Way,
They stretched in never-ending line
along the margin of a bay:
Ten thousand saw I at a glance,
tossing their heads in sprightly dance.

The waves beside them danced; but they
Out-did the sparkling waves in glee:
A poet could not be but gay,
in such a jocund company:
I gazed—and gazed—but little thought
what wealth the show to me had brought:

For oft, when on my couch I lie
In vacant or in pensive mood,
They flash upon that inward eye
Which is the bliss of solitude;
And then my heart with pleasure fills,
And dances with the daffodils.

Posted by Cathy Le Feuvre at 08:00 AM in Arts, Biography, culture, Daily Thoughts, environment, inspiration, Literature, nature, On This Day, One Day at a Time, poetry, seasons, Writing | Permalink | Comments (0)