If you're a person who sings, and sings seriously - I'm thinking about choirs and the like, including in church - you MAY know the piece of music I'm talking about today.

It's not easy to sing - I know, because I've tried it once or twice and it was beyond me.

But it's a glorious piece, actually more of an experience I would say, rather than just a 'sing'

George Frideric Handel was a German born composer who had trained and worked in Germany and Italy before moving to England in 1712. His reputation was built on compositions of Italian opera but as public tastes began to change, he adapted. In 1727 Handel became a naturalised British subject and by the 1730s he began producing English oratorios. 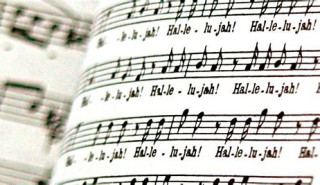 Research tells me that Messiah was actually Handel's sixth oratorio in English and although it apparently had a rather low key debut, it was immediately popular. About a year after the Irish first night, Messiah was premiered in London, a gala performance attended by royalty. And apparently King George was so moved by the rendition of the “Hallelujah Chorus” that he rose from his seat. The audience also took to their feet and for the past 270-plus years, audiences have continued to do the same. Over the centuries it has become one of the best known, most popular and most frequently performed choral works in Western music.

But what I didn't realise until I started researching was that it was written at a time when Handel's health and reputation was failing. He was an opera man and that genre had begun to become less popular. He felt his work had become rather jaded and he was struggling, but he was a deeply religious man and he turned to the Bible for inspiration. And that's when he was re-energised and he started to produce some amazing works!

Messiah is all about life, death and resurrection of Jesus Christ - the 'Messiah' being the saviour of humankind who is first mentioned in ancient Jewish scripture. Christians believe Jesus is the 'Messiah'.

Handel was so inspired that he apparently finished Part I of the piece (the birth of the Messiah and the Old Testament prophecies) in only six days. He composed Part II (the passion, death, resurrection and ascension of Jesus) in nine days. Part III ( which charts the promise of redemption, the day of judgement and the resurrection which ends with the final victory over death for all those who believe) was completed in just six days. The orchestration took Handel only a few days more which means that in total, the whole composition took less than 25 days. Astonishing!

Handel's music is set to words compiled by Charles Jennens who drew from the King James Bible, and from the Coverdale Psalter, the version of the Psalms included with the Book of Common Prayer.  The 'libretto' is apparently not designed to dramatise the life and teachings of Jesus, but to acclaim the "Mystery of Godliness", and anyone who has sung or heard Messiah will be aware not just of the wonderful music but also of the spiritual impact it can have on a soul!

Handel continued to write religious music and to perform until, at the age of  74, he collapsed while conducting a performance of Messiah. At that time, as he was laid in bed he allegedly said  “I should like to die on Good Friday.”

That wasn't to be, although he did die on a Holy Saturday -  April 14th, 1759. That anniversary is tomorrow! Handel’s grave is in Westminster Abbey in London and it's marked by a statue of him with a score of Messiah opened on the table. The page that is visible is, “I Know That My Redeemer Liveth.”

But today I'm going to share perhaps the most familiar piece of music from Messiah and it's the piece that brought a king to his feet. And it's still attracting crowds ... as this 'flash mob' by the Jacksonville Symphony Chorus in the USA proves.

I love this and as I watch it I wonder if all those singing are actually members of the Chorus, or whether because the piece is so well known some people just started singing along?

I think Handel would have loved it.