There are some things in life that you think have been around forever.

Think about things you enjoy -  maybe a cup of tea, or coffee? What about cake? Sandwiches? Spaghetti Bolognaise?

Well, now I'm just talking about things I like ... but you know what I mean?

Recently we've been thinking about Easter and that's been around forever hasn't it? Well no ... there was the first Easter, that day when Jesus was resurrected. That amazing, outstanding day in history.

Ever heard of ABBA?

If not - where have you been?

Growing up, ABBA was one of the soundtracks of my teenage and early adult life. They were massive. I listened to them on the radio, bought the albums, danced the night away to the sounds of Agnetha, Björn, Benny and Anni-Frid.

They still are massive! Their award winning music has stood the test of time down the years. They are legends in their own lifetimes across the world and if you've watched the movie or seen the stage show 'Mamma Mia' you'll know the tunes. ABBA just keep going on and on. They've brought so much joy to so many people. How great is that?

But, believe it or not, there was a time when the world was unaware of ABBA. 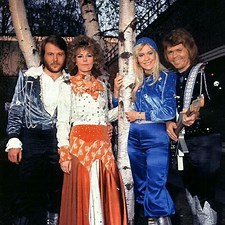 If you're not aware, they won the 1974 Eurovision Song Contest, with their song 'Waterloo'. A weirdly wonderful song that just made us all laugh and want to get up and dance and sing along.

When millions tuned in to watch the performance on TV that night, we had no way of knowng that very soon ABBA would become part of all our lives!  Who could have imagined that when the obscure and colourful band from Sweden stepped onto that stage that there would soon be a time when we could hardly think of life without their music?

So - to celebrate - let's wind the clock back to that night in Brighton on the south coast of England, and the beginning of history...

Posted by Cathy Le Feuvre at 08:00 AM in broadcasting, culture, Daily Thoughts, History, inspiration, Music, On This Day, One Day at a Time, rock and roll / pop music, song, television | Permalink | Comments (0)