I worked in London for many years and so commuting into the City and across the metropolis was a great part of my life for a good deal of time.

At one point and for many years I often passed through one particular London Underground (Tube) Station - Baker Street - almost daily, and I got to know it very well.

It's a fascinating place. It's where lots of different underground lines converge, and it's a labyrinth of platforms and interlinking corridors.

And it's historic - Baker Street is one of the original stations of the Metropolitan Railway,  the world's first underground railway, which opened on 10 January 1863.  When I was working in London, the Bakerloo Line, which gets it's name because it links Baker Street and Waterloo among other stations, celebrated it's centenary. The line opened in various stages between 1906 and 1915.

Baker Street is also famous because of its links with the fictional detective Sherlock Holmes. 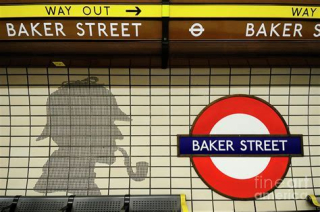 His creator Sir Arthur Conan Doyle had Holmes living at a fictional address - 221B Baker Street - which back at the time when the novels were being written, would have been a high class residential area. Today the Sherlock Holmes Museum is at the address and there's a statute of Sherlock Holmes outside Baker Street station which also draws masses of visitors to the tube stop.

The platforms are decorated with tiles bearing an iconic silhouette of Holmes - pipe and all ! I love the way the powers that be have embraced the mystery of a fictional character, and woven it into a place of historic value.

But I'm thinking about this particularly today because, LONG  before I knew about the Tube station at Baker Street, I was aware of the name, thanks to a fantastic song which bears the same title.

Not that it has anything to do with the story of the underground station, but today is the birthday of Gerry Rafferty, the Scottish singer/songwriter and the creator of  'Baker Street'. Born this day - 16 April - in 1947

I've loved this song since it first made the charts in 1978, and I have to say, often when I passed through the actual station I found it ringing around in my head!

Posted by Cathy Le Feuvre at 08:00 AM in Arts, Daily Thoughts, inspiration, Literature, Music, On This Day, One Day at a Time, rock and roll / pop music, song, Travel | Permalink | Comments (0)