Have you ever had a day when you think 'I'd just like to get away from it all'.

That concept intrigues me, the idea of just going somewhere where I would be unknown, not surrounded by the stresses of life, perhaps completely on my own, starting a 'new life'.

Some people DO turn their back on their lives, there's evidence of that, just 'disappearing' from the radar, and sometimes that's down to fear, mental health challenges, or just extreme stress and sadness. I have actually met people who have done that and it is not a choice made lightly but often the result of great trauma. But my main concern if I were to do something so drastic would probably not be for myself but for those I leave behind, my family and loved ones, friends. Causing them pain, not knowing where I was or whether I was dead or alive, would be simply horrid and rather cruel.

This idea of being 'separated' from the world is one which lots of writers have been intrigued by down the centuries, and I'm included in that number.

And it all began really on this day - April 25th - in 1719, with the publication of a book which is reckoned to be the first 'English Novel', and it caused a sensation.

In fact, although it was fictional, readers were convinced it was a true account of a man who was shipwrecked on a desert island.

Any idea what book I'm talking about? 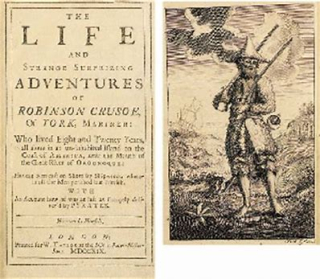 Well, let me put you out of your misery - it was, of course, 'Robinson Crusoe' by Daniel Defoe.

Defoe was an interesting chap - not just a writer and journalist, but also a trader, pamphleteer and ... a spy! He was often in trouble with the authorities and even served time in prison because he wrote politic tracts, offering some new ideas about how the world should be. And some leaders and intellectuals did actually take notice of some of what he had to offer.

I think I first read an illustrated children's version of 'Robinson Crusoe' when I was quite young, but the full version is really interesting too, if a bit of a read! The central character is 'Robinson Kreutznaer' who spends 28years as a castaway on a remote desert island actually near the coasts of Venezuela and Trinidad. In the story he meets all sorts of adversities but one of the things that captured MY imagination was the way that, having landed on the island, he has to build a whole life for himself, including somewhere to live, learning how to fish and hunt and attempting to survive.

By the way, I'm also a bit of a fan of an old Disney film called 'Swiss Family Robinson' who are also castaway on a remote island after a shipwreck, and have to use their ingenuity to keep body and soul together. This is based on a book of the same name, a novel by the Swiss writer Johann David Wyss, first published in 1812. And I'm also a bit obsessed by a more modern movie featuring Tom Hanks - yes I'm talking about  'Castaway' which has all the same elements and is a little bit more realistic about the actual challenges of being stranded alone on a remote island.

As I said before, when 'Robinson Crusoe' was first published, many readers believed he was a real person and the book was a true account of his life. But actually the story is thought to be based on the life of Alexander Selkirk, a Scottish castaway who lived for four years on a Pacific island called "Más a Tierra" which is now part of Chile. The place was actually renamed Robinson Crusoe Island in 1966.

What's important to note though is that the book is not JUST about Robinson's time on the island. The narrative begins with his life before the shipwreck that leaves him stranded, and after his rescue, we learn about how his life unfolds after nearly three decades on that remote island.

This reminds me that sometimes we fixate on certain aspects of a person's life, without taking into account that perhaps that just reflects a very small proportion of what they have lived, what they have offered the world. We may condemn a person for an action long after they have been well rehabilitated, or after they have turned their back on their previous lives and made more positive choices than negative. We may applaud people for just one or two things they've done in their lives that have been brilliant and that has brought them publicity, and that's not a bad thing, but somehow we forget others who may spend their entire lives quietly 'doing good' for the rest of humanity. In our celebrity culture, there's a lot of that going on, isn't there? Our media puts people on a pedestal for things they have done, often for great wads of money or cynically for publicity purposes, and yet that might not be who they really are.

Or maybe it is? Who knows?

It's certainly something to think about, isn't it?

Meanwhile, if you've never read 'Robinson Crusoe', may I recommend it? Because, if nothing else, it might inspire us if we DO decide to take ourselves off into the 'Nowhere' and have to fend for ourselves.