I was listening to the radio the other day and heard a song which brought back so many memories.

First, this version of 'Happy Talk' was released in 1982, the year I left university and started work.  It was a time of great excitement and promise - my whole life lay ahead of me.

Second, it was sung by a chap called 'Captain Sensible' - it was an ironic pseudonym because he was far from 'sensible'. He was not just quirky but rebellious. He had set up the punk band 'The Damned' which had been one of the soundtracks to my late teens. 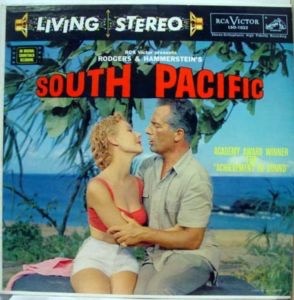 And finally, this quirky song wasn't an original. It was actually a tune and a song from a brilliant musical, a stage show called 'South Pacific' which premiered on Broadway in New York 1949. In 1958 it was made into a movie of the same name and by the 1970s I was listening to the soundtrack and learning all the songs.

Interesting point here - we didn't have a 'South Pacific' LP or vinyl record. We actually had the movie sound track on a reel-to-reel audio tape recording which we played on a tape machine. So I listened to 'South Pacific' accompanied by the whirring sound of the tape running through the machine. Classic.

And I hadn't even seen the film! It was years later, maybe a few years after Captain Sensible sang that song that I would have hired a VHS from 'Blockbuster' ... the video hire shop. It's the way we got to see loads of movies at home at the time.

'Happy Talk' was always one of my favourites songs from the show - it's sung by the character Bloody Mary and that was the nearest I got to using a swearword when I was a child! I knew it off by heart, so when Captain Sensible appeared on BBC Top of the Pops - I could sing along.

And the words I loved the most?

It's nearly 40 years since Captain Sensible released 'Happy Talk' and around 50 since I first learned those words. It still rings true for me.

As I said before, in 1982 I was standing of the threshold of life and was at the start of my career as a journalist with all the excitement of what could be. Some of my dreams - personal and professional - have come to pass, others not.

These days I'm nearer the end of my full-time working life but I'm still excited about what might be. Later this week I will start a new adventure, as I leave working for the BBC and go back to being a freelance writer/broadcaster/PR + communications 'guru'. More of that later !

And I have this song going round in my head.

Which for me is a GOOD thing! It makes me smile!