Today is International Women's Day. It's a day to support and celebrate women's rights. Not that we shouldn't do that EVERY day but it is a good thing to have ONE day at least when the world comes together to celebrate the achievements of those of the female gender and to think about what we all might do to help ensure girls and women gain the equality they deserve. 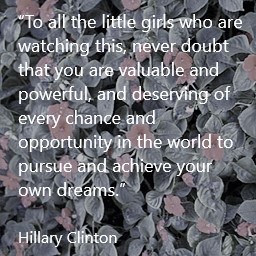 It's also a day to encourage girls and women to believe in themselves, to believe that they have as many rights in life as anyone else to follow their dreams no matter how big. I love this quote from Hillary Clinton ... it says it all I think! Even if the world around you is telling you that you are second class, all girls and women are deserving of the same chances as boys and men. And we all not only have the right to dream, but to make those dreams come true.

In 2021 this might sound a peculiar thing to say, because in many cultures women have equality with men across the board ... don't they?

Well, perhaps in many countries women do have equality, even in law, but that doesn't mean females get equal treatment and are considered equal by everyone. And we do know that there are many cultures still where women ARE treated as second-class citizens and girls still don't have the same chances as boys. There are still communities where girls are not allowed to go to school, where some are held back from school because they need to be at home to help the family - collecting water, looking after siblings. There are some cultures where girls are married off to older men even before they are teenagers, effectively ending their childhood. There are still places where women do much of the work in the community, as well as taking the lion's share of family responsibilities and child care, but are excluded from decision making and leadership.

And that's just for starters!

Today International Women's Day has become increasingly about standing up for women's equality and challenging the norms of society which keep women and girls subordinate.

And this is interesting because that's where IWD began back in the early 1900s, when women's inequality and oppression was beginning to result in more and more women fighting for change.

The campaign for women's suffrage - the right of women to vote - had actually begun in the mid 19th century, with corresponding advocacy for economic and social as well as political equality. But by the early 20th century not much progress had been made and there was growing unrest and debate. Women still felt largely oppressed and they became more vocal.

In 1910 there was big conference in Copenhagen in Denmark -  the second International Conference of Working Women - and it was there that the idea of an International Women's Day was mooted. The conference was attended by over 100 women from 17 countries and the idea was approved.

Although the USA marked their National Women's Day on the last Sunday in February for another couple of years, in 1911 International Women's Day was marked for the first time in Austria, Denmark, Germany and Switzerland, on March 19th. On that day, more than one million women and men attended IWD rallies campaigning for women's rights to work, be trained, to hold public office and end discrimination. And the right to vote.

As the world stood on the brink of global conflict which we now know as World War I, Russian women observed their first International Women's Day on February 23rd in 1913 - again the last Sunday in February. At that time, Russia followed the Julian calendar while most of the rest of the world used the Gregorian calendar where that day equated to March 8th. Hope you're keeping up with this.

Anyway, it was at this point that discussions began to try to align everyone to celebrate on the same day and it was agreed to mark International Women's Day every year on March 8th.

In 1914, women across Europe held rallies to campaign against the impending war and to express solidarity with women across the world. In London a women's march resulted in the arrest of suffrage campaigner Sylvia Pankhurst as she made her way to speak to the large crowds in Trafalgar Square.

Although women remained passionate down the years, it was not until 1975 that the United Nations celebrated International Women's Day for the first time. Two years later, the UN General Assembly adopted a resolution proclaiming a United Nations Day for Women’s Rights and International Peace to be observed on any day of the year by nation states, in accordance with their individual national and historical traditions.

Moving into the 21st century and by the year 2000 unfortunately there was little appetite for or activity in most countries for International Women's Day. The world had moved on from the years of 'feminism' and in fact that concept was now a bit of a dirty word. But still the world was not equal. Women were still being treated differently, including being paid less than men and given fewer opportunities in many areas of life.

So it was that in 2001 a website called www.internationalwomensday.com was launched, with the aim of reinvigorating International Women's Day. Today the site provides help, resources and guidance to all those campaigning for better equality between the sexes, and more opportunities for women and girls across the world. Every year there are different themes which sum up some of the challenges facing women across the globe, and call us to action. Some of the themes have included #ChooseToChallenge #TheGenderAgenda #EachforEqual #PledgeforParity #PressforProgress #MakeItHappen ... you get it right?

In 2011 the centenary of International Women's Day was marked across the world, and in the USA, President Barack Obama proclaimed March 2011 to be "Women's History Month", calling on Americans to mark the day and to reflect on "the extraordinary accomplishments of women" in shaping the country's history. Which brings us to Hillary Clinton, who was then US Secretary of State. She launched the "100 Women Initiative: Empowering Women and Girls through International Exchanges".

Down the years, there's been a substantial change in attitudes to International Women's Day. There has been sign up from many international groups working with girls and women, lots of charities and business organisations now organise events and many business leaders and celebrities actively support the day.

In some countries IWD has the equivalent status of Mother's Day where children give small presents to their mothers and grandmothers, and the day is officially recognised and celebrated in many countries around the world, including some where gender equality is still not a given.

Because although many people, including from younger generations who didn't live through the years before Gender Equality legislation, might think that the battle is won, there is still much to be done. Women are often still not paid the same as men doing the same job. Women make up at least half the population of the world but we still don't have equal representation of females in politics and the business world. Many women choose to create their own businesses rather than enter the male dominated business world. Around the world, as I said at the start, girls are often disadvantaged for cultural reasons. They experience inferior health and education, and violence against women and girls is often worse than against men and boys.

Today we are encouraged to not just act locally but also to think on a global level and to try to make a difference, and not just on International Women's Day.

But what might that mean for us? Might it mean stepping out of our comfort zone? Not just accepting the treatment of others because it doesn't affect us personally?

This year's campaign theme on International Women's Day is #ChooseToChallenge

We might not march like those women in 1908 and in 1914. We might not get arrested as Sylvia Pankhurst did, just for deigning to speak up for the rights of women.

And, as it says on the International Women's Day website,  today maybe we can all spend just a few minutes in reflecting how WE might be able to do our bit "to ensure that the future for girls is bright, equal, safe and rewarding".

And you don't have to be female to take up the challenge. It's something we can ALL do!