A person's a person, no matter how small!

Here are some lines you might recognise if you, like me, have been a reader since you were very little.

"The sun did not shine, it was too wet to play, so we sat in the house all that cold, cold wet day. I sat there with Sally. We sat here we two and we said 'How we wish we had something to do.'"

Or how about this?

Yes, opening lines from two children's classics - 'The Cat in the Hat' and 'Green Eggs and Ham'

Admittedly, if you're my age, you're more likely to know the name and the books if you were brought up in the United States of America, but nowadays Dr Seuss is globally popular not just for the books (he wrote and illustrated more than 60 books under that pen name), but also because of the cartoons and films that have brought the author's incredible imagination and creatures and thoughts to life over the decades since he first put pen to paper.

He wasn't just an award-winning world renowned children's author and poet, but also an illustrator, animator, filmmaker and political cartoonist. And by the time of his death in September 1991, his many children's books had sold over 600 million copies and been translated into more than 20 languages.

'Horton Hears a Who' (published in 1955) is one of my favourites - the story in rhyme of Horton the Elephant and how he saves Whoville, a tiny planet based on a small speck of dust, from the evil animals who mocked him.

The most popular line from that book is "A person's a person, no matter how small" - it's just so profound! Dr Seuss isn't just about fun, there's usually a moral in there somewhere too.

And how about 'How the Grinch Stole Christmas!' ? That one was published in 1957.

All written by Dr Seuss! NOW do you know who I'm talking about?

As was/is the case with many successful authors Ted Giesel's first efforts as a children's writer - a book called 'And to Think That I Saw It on Mulberry Street' - was rejected by many dozens of publishers. But just a few years later, by the time of the outbreak of the Second World War, he was beginning to become quite successful. During the war he supported the US war effort and made a name for himself as a filmmaker. One of his war documentaries inspired a film called 'Design for Death' (1947), a study of Japanese culture - and that picked up an Oscar for Best Documentary Feature. A couple of years later in 1950, a film called 'Gerald McBoing-Boing', which was based on an original story by Seuss, won the Academy Award for Best Animated Short Film.

Such a brilliantly talented person!

Dr Seuss was also at the forefront of the movement to get children reading. In 1954, a report was published in Life magazine highlighting illiteracy among school children in the USA. It concluded that kids were not learning to read because their books were boring. The director of the education division of publishers Houghton Mifflin, William Ellsworth Spaulding, compiled a list of 348 words that he believed were important for young readers - first-graders - to recognize. Spaulding asked Ted Geisel to cut the list to 250 words and to write a book using only those words.

The result was 'The Cat in the Hat', which uses 236 of the listed words.

Seuss' books, his words, have certainly got children reading down the years. Just as JK Rowling got a generation at the end of the 20th century picking up a Harry Potter book, Dr Seuss' creations have inspired millions of young readers.

Down the years Dr Seuss picked up many an award, and even a special Pulitzer Prize in 1984, for his "contribution over nearly half a century to the education and enjoyment of America's children and their parents".  He even has a star on the Hollywood Walk of Fame and although he passed away in 1991 he remains one of the highest paid celebrities and authors.

But I think it's his ability to engage children with words and to encourage them to read, opening up their imaginations to a world of possibilities and to laugh out loud, shed a tear or two and empathise with others, that is his greatest legacy.

So, with that in mind, I'll leave you with a brilliant quote from the amazing man called Dr Seuss. 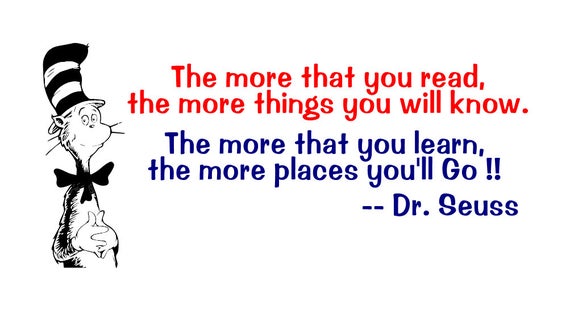